In B.C. and Alberta's pipeline fight, only one side is unified

Rachel Notley needed an issue that would stir Albertans' oft-wounded provincial pride. John Horgan gave it to her. 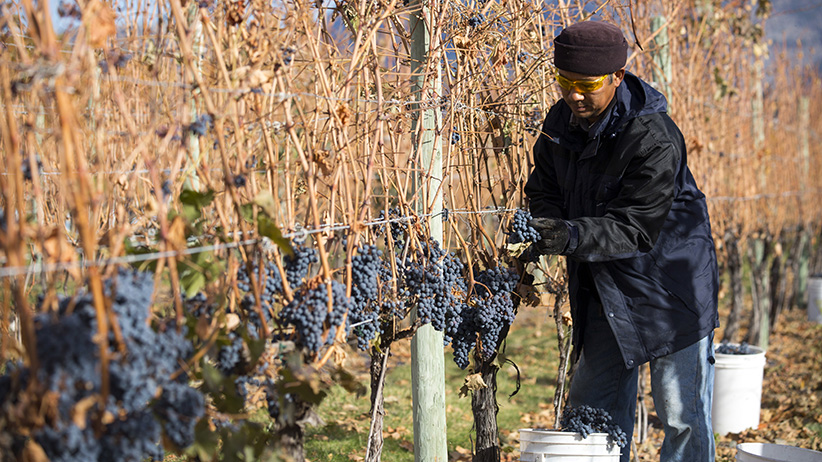 Will wine from Okanagan grapes be the next target of an angry, unified Alberta? (Getty Images)

Political battles are so often fought with images; activists know this well. What we’ll remember from Week 1 of the B.C.-Alberta Pipeline Wars is the frustrated owner of a Fort McMurray pasta joint taking Okanagan wines off her menu, and environmentalists being ejected from a town hall in Nanaimo for heckling Prime Minister Justin Trudeau. Thusly drawn are the apparent battle lines: two provinces, bitterly opposed, ready to spill wine and shout epithets to defend their sides.

Or not. While the streets of Lethbridge and Edmonton are not running red with the enemy’s merlot, it’s true that B.C. Premier John Horgan has enraged most of his 4.3 million neighbours by proposing to restrict any increases in bitumen flow into his province. British Columbia, meanwhile, does not line up so neatly against Kinder Morgan’s stalled Trans Mountain pipeline, despite the loud boos and catcalls Trudeau received Friday as he defended the pipeline during an appearance on Vancouver Island. Off the island and beyond the Lower Mainland, where people rely on resource jobs (or fly to Alberta in search of them), Horgan’s residents aren’t with him.

In B.C., 39 per cent believe in building pipelines while 29 per cent are against, according to an Abacus Data survey; the rest are in the ambivalent middle. In Alberta, the split is 67 per cent to six. An Angus Reid Institute poll last fall asked directly whether Trans Mountain should go ahead: British Columbia’s yeas beat the nays, 47 per cent to 33; B.C. Liberals are likely to be in favour than NDP or Green voters are opposed. By declaring that lingering questions about bitumen spill science necessitate further delays to adding pipeline and oil-by-rail capacity, Horgan is appealing to a relatively thin slice of the electorate: the environmental NDP base around Vancouver (not the jobs-jobs-jobs union base elsewhere), while aiming to pacify the Green MLAs propping up his minority. The NDP government has, after all, crossed the Greens by proceeding with the Site C dam and promoting liquefied natural gas exports—two energy projects that will produce more jobs-jobs-jobs than a pipeline from Edmonton to Burnaby.

Pipelines are an issue, then, which divides B.C. while it unifies Alberta. And while the latter’s NDP has desperately hoped that a pipeline under construction by next year would boost its limited hopes of winning reelection, it’s not a bad consolation prize to convert Notley almost overnight into the outraged and aggrieved leader who channels the will of an outraged and aggrieved populace. She’s winning support from unusual corners, after three years of hemmoraging support from pretty much every corner of Alberta. That restaurateur in Fort Mac told CBC Radio that she’s conservative but she stands behind Notley’s tone this week—how the premier bashed B.C.’s move as a broadside against the constitution and working people, and curtailed negotiations to, at some point, purchase more electricity from B.C. As-seen-on-TV financier Brett Wilson praised Notley’s “feisty” response. Even Scott Moe, the new conservative premier of Saskatchewan, declared himself in solidarity with his NDP counterpart next door. This has reduced United Conservative Leader Jason Kenney to asking why his rival is only now adopting the bellicose posture he’s had for ages, and suggesting that some pre-emptive epée thrusts might’ve discouraged Horgan from acting. But if politics is all about timing, there must be merit in Notley holding back on the toughness until there’s actually a threat to respond to.

As the Prime Minister rather gently but unmistakably takes the pro-pipeline side, Trudeau’s office must be aware of the pipeline’s support levels in either province, and the risks he faces around Vancouver, where most federal Liberal seats in the province sit. He’s not yet saying exactly how he’ll assert federal jurisdiction over Horgan’s manoeuvres. But so much of the B.C. government’s tactic is about causing delay that strikes against investor confidence in pipelines; by letting this potential restriction dangle for longer, Trudeau lets all that desired damage occur. This, in turn, gives Notley more political room to harangue Trudeau over his rhetorical vagueness—and this might give her a chance to look like former premier Peter Lougheed did nearly four decades ago, attacking another Trudeau’s National Energy Program in prime-time televised addresses. In the 1982 election, Lougheed’s Tories won 75 of 79 legislature seats.

RELATED: A B.C. pipeline spill would be inevitable. But who would pay?

Truth be told, pipeline construction in Kamloops and Burnaby isn’t likely to give Alberta’s NDP another four years in office. Not in a province where she enjoyed a flukey win and abrupt quadrupling of NDP support in 2015, and where every other party was detested or in flames. She has yet to win credit for Trudeau’s green light for Trans Mountain, no matter how many times either politician said the Alberta carbon tax was a key part of that deal. Still, this week, as that pipeline seemed in fresh peril and Rachel Notley showed anger and resolve, she finally had a moment of looking like a leader Albertans could rally behind.