A new sculpture in Ottawa celebrates the ‘beauty and power’ of John McCrae’s 'In Flanders Fields', 100 years old on May 3 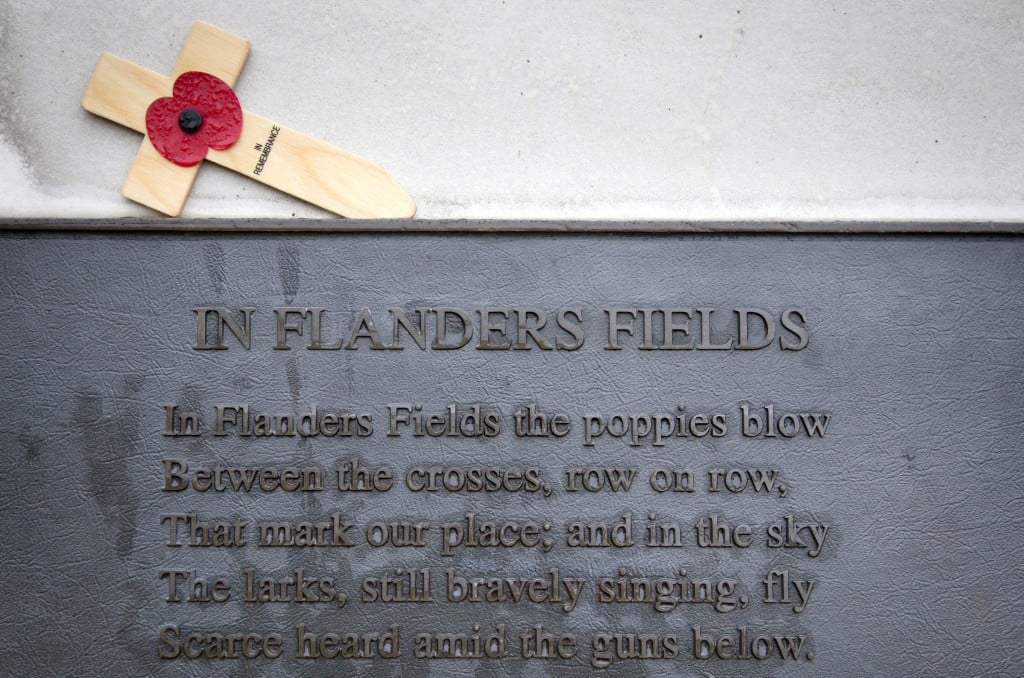 In this photo taken on Nov. 12, 2013, a red poppy on a wooden remembrance cross lays above a bronze plaque which contains the poem In Flanders Fields by World War I Canadian soldier John McCrae at the Essex Farm Commonwealth Cemetery on in Ypres, Belgium. (AP Photo/Virginia Mayo)

Just about every English-speaking Canadian kid knows the moment. It comes at the start of the sixth line of “In Flanders Fields,” after the opening part about the poppies blowing and the bravely singing larks flying: “We are the Dead.” Four syllables, four words, which have delivered a century of chills to children when they encounter Dr. John McCrae’s poem at school on Remembrance Day. “I remember getting to ‘We are the Dead’ and that feeling,” says Nancy Holmes, a University of British Columbia creative writing professor and poet. “It’s a deeply haunting poem that way.”

That ghostly frisson is a key reason “In Flanders Fields” endures. But there’s much more behind its status as effectively Canada’s national poem, including the story of the poet, who was both soldier and physician. The centenary of the poem—famously written by McCrae near the front in Belgium on May 3, 1915—is being marked by the dedication of a new statue in Ottawa, with a second casting of the larger-than-life bronze scheduled to be unveiled in his hometown, Guelph, Ont., in June. 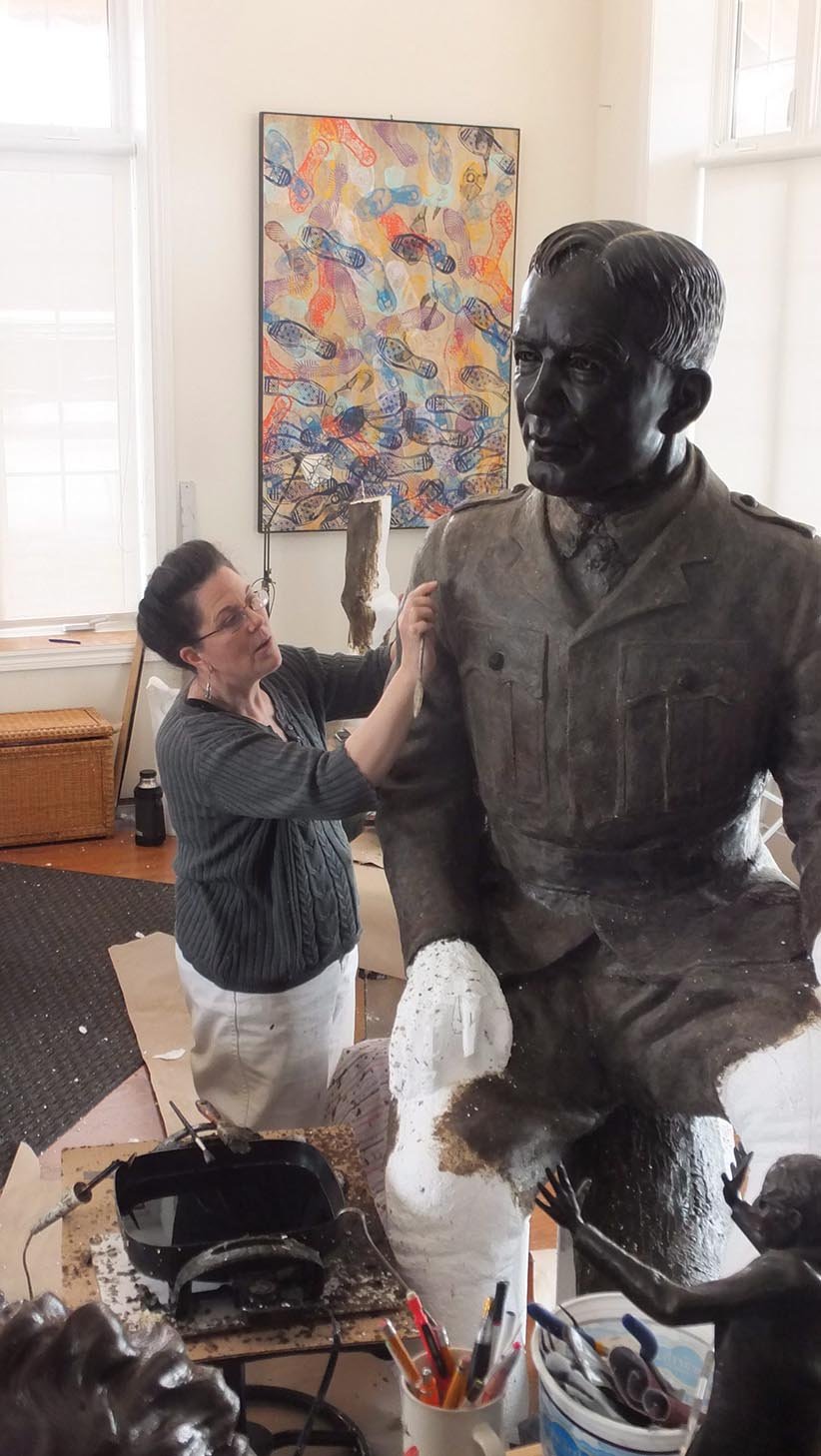 The sculptor, Ruth Abernethy, depicts the 42-year-old army doctor, pen in hand, sitting on a battle-blasted tree trunk, the verses he has just written on his knee. He is looking up with a haunted gaze. His close friend, Alexis Helmer, had died the previous day, one of many Canadians killed in the terrible Second Battle of Ypres. “He is trying to find his own way through the madness of warfare, to clarify his thoughts,” Abernethy says. “If his friend hadn’t died in vain, then the rest of them had to buck up and get on with it.”

The poem’s dual purpose—first contemplating death, then calling for the fight to continue—troubles Holmes. She has taken “In Flanders Fields” more seriously than most academics. In an essay for the journal Studies in Canadian Literature, she said Canada’s best-known 15 lines of verse were “virtually ignored in any discussion of Canadian literature,” a gap she set out to fill with expert analysis. She concluded that the poem “reveals itself to be a rather assured little word machine.”

It’s not just tenured professors who have tended to undervalue the skill that went into “In Flanders Fields.” A recent news story on the poem’s 100th anniversary alluded to how McCrae “scribbled the simple but poignant stanzas.” In fact, he was a careful amateur poet, who had published in magazines before the war. “In Flanders Fields” is a rondeau, a precise verse form Holmes says is closely related to the more familiar sonnet. There are just two rhymed sounds, “oh” (“blow,” “row,” “foe,” and so on) and “eye” (“sky,” “fly,” “lie”)—one reason it tends to stick in the memory.

Holmes points to other deft touches. In that pivotal sixth line—“We are the Dead. Short days ago . . .”—there’s a strong pause, called a caesura, after the word “Dead.” She says that break conveys the abrupt end of a brief life. The more she studied the poem, Holmes says, the more she came to appreciate its first nine lines, which describe the fields, the skies, and the dead who “loved and were loved.” But she is far less enthusiastic about the final six lines, which begin with the rousing, “Take up our quarrel with the foe.” Holmes contends that McCrae couldn’t quite bear the terrible reality he presents in the first part, so shifted his tone to a “recruiting-poster addendum.”

She is not alone in feeling uneasy about those final lines urging on the war effort. In his landmark 1975 book, The Great War and Modern Memory, the influential American critic Paul Fussell took bitter aim at the poem’s affinity with wartime propaganda messages. “And yet,” Holmes says, “the poem does have beauty and power.” About that, there can be little argument: “In Flanders Fields” is shared secular scripture in Canada, with just about everybody remembering at least a few lines, much the way almost all Americans know fragments of Abraham Lincoln’s Gettysburg Address.

It’s interesting that both Lincoln’s compact speech and McCrae’s efficient poem deal with war graves—the U.S. president dedicating a Civil War cemetery, the Canadian doctor contemplating “the crosses, row on row.” Both faced war’s horror, but neither questioned the cause. McCrae was a devoted soldier. Born in Guelph in 1872, he graduated from the University of Toronto’s medical school in 1898, then volunteered for the Boer War in South Africa, where he served as an artillery lieutenant. He came home to build an impressive medical career in Montreal, before enlisting again at the outbreak of the First World War. He served as an army doctor until, worn down by the war’s brutal demands, he died of pneumonia and meningitis in France in 1918.

Abernethy’s sculpture was commissioned by the Royal Regiment of Canadian Artillery, in which McCrae served. She took care to incise his full poem on the paper he holds on one knee, and says she expects adults to look to make sure it’s really there, and children to climb up to read. More than any other piece of Canadian literature, though, “In Flanders Fields” has proven it didn’t need to be cast in bronze to be indelible.