Why Brian Gallant is now premier of New Brunswick

New Brunswickers desperately want to believe in promises of new jobs and help for struggling families. 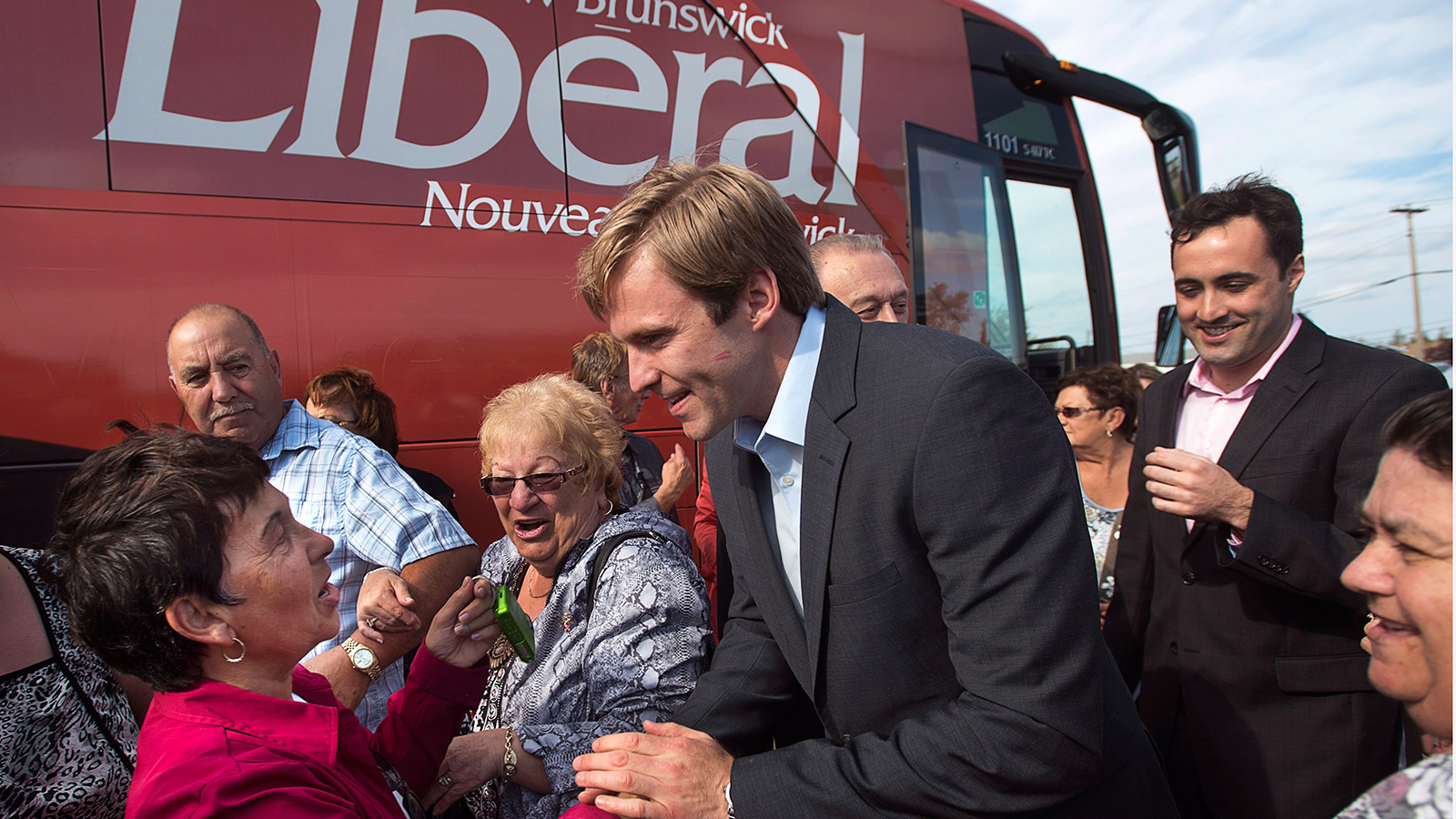 For a province that boasts Canada’s second-oldest population — 16.2 per cent of residents are 65 and older— New Brunswick seems to have blessedly few qualms about youth.

This week, for the sixth time since 1960, residents elected a newbie premier who is under the age of 40. But 32-year-old Brian Gallant—a Moncton lawyer with Hollywood hair and an engaging smile—may be the greenest rookie yet. The leader of the provincial Liberals since October 2012, he’s occupied a seat in the legislature for just 17 months. (His previous political experience consisted of student federation president at Université de Moncton and a quixotic 2006 run against then-premier Bernard Lord in the riding of Moncton East, where he lost by almost 1,000 votes.) Before that, he practised corporate, commercial and immigration law. His official biography notes that he put himself through university by running two small businesses. In 2013, he and his brother Pierre won the provincial championship in men’s doubles tennis.

However, as the new premier noted after a long, long election night—the official results were delayed for hours due to software problems with new vote-tabulation machines—his mandate is as much about who he isn’t, as who he might become. “New Brunswickers have asked for change,” said Gallant, “and that’s what we will try to deliver for them over the next few weeks, months and years.”

It was just four years ago that David Alward and the Conservatives swept to victory in the province, promising to balance the budget and increase health spending while freezing tax and power rates. Over his mandate, the deficit came down by about half, but still stands at $391 million for the current fiscal year. And the provincial debt is now approaching $12.2 billion—a $3.8-billion increase since the Tories took power.

Alward’s proposed solution to New Brunswick’s persistent economic difficulties was a vast expansion of shale gas extraction, a projected $10-billion private investment he said would transform the province into a “have,” just like Newfoundland and Labrador’s oil boom. “Say Yes” was his campaign slogan. Gallant countered with calls for a fracking moratorium and $900 million in infrastructure and stimulus spending over six years—a move he claims will create 1,700 jobs a year. When the dust finally settled, the Liberals took 43 per cent of the vote and won 27 of the province’s 49 seats. (The Conservatives captured 21 and, in a New Brunswick first, the Green party elected one MLA.) Alward, 54, who won re-election on a night that saw nine of his ministers go down to defeat, resigned as party leader.

The Conservative loss marks the second straight one-term-only government for New Brunswick. Prior to that, residents had always given incumbents at least one more kick at the can, dating all the way back to Confederation. “There seems to have been a change of temperament,” says Stewart Hyson, an associate professor of political science at the University of New Brunswick. “Perhaps we’re expecting too much. Or perhaps we’re getting frustrated with the lack of progress.”

The election did re-establish some other long-standing patterns, however, most notably, Liberal dominance in the largely French-speaking upper half of the province. “New Brunswick is divided,” says Hyson. “The north has had great economic difficulty with the fishery and mills and mines closing, while the south, with its industry and manufacturing, has been a lot better off.”

Much has been made about what Gallant’s success might mean for another youngish Liberal with good looks and fine grooming, Justin Trudeau. The federal leader campaigned alongside his provincial counterpart as national-party heavyweights, strategists and pollsters all lent a hand. Prime Minister Stephen Harper’s Conservatives currently have 13 of Atlantic Canada’s 32 seats, including eight in New Brunswick. But with the Liberals now in power provincially in Nova Scotia, P.E.I. and New Brunswick—and knocking on the door in Newfoundland—the Tory toehold looks increasingly tenuous.

Jamie Gillies, a political scientist at St. Thomas University in Fredericton, warns against reading too much into Gallant’s victory, however. Coming into the vote, he enjoyed a 20 percentage-point lead in the polls, yet, by election night, the margin had shrunk to just eight per cent. And Gillies notes that the factors favouring youthful leaders are particularly provincial.

“The pecking order of star candidates running for leadership positions in New Brunswick is shorter and, as a result, there are more opportunities for young, ambitious politicians to distinguish themselves,” the associate professor wrote in an email to Maclean’s. More established politicians tend to shift to the federal level “as a way to further their ambitions or move to a non-political career,” he notes.

Brian Gallant is now premier because New Brunswickers desperately want to believe in his promise of new jobs and help for struggling families. He’s got four years to deliver. That, or risk being transformed from “Boy Wonder” to “Yesterday’s Man.”