In a city where politicians call for burqa bans and values charters, the Centre Culturel Islamique was a model of hope and integration

Jacques Vézina stood in the parking lot, one amongst thousands, his face lit by the candle in his hand. Less than 24 hours ago, no more than 200 m from where he stood, a gunman walked into Quebec City’s largest mosque and killed six worshippers as they finished their prayers. Shock and decorum kept the 64-year-old from saying much; he’d lived his whole life in Quebec’s capital city, and the enormity of what had happened hadn’t yet sunk in. Yet here he was, huddled in a spontaneous sea of mourners, in his first candlelight vigil.

“I heard about it on the news,” Vézina said. “I came, because it’s the least I could do to show civility, respect and compassion for the people who lost their lives. Quebec City is the last bastion of the Francophone population in Quebec. It’s a big village, really, though there’s more and more minorities coming here. It’s hard to integrate into a town that is so tightly knit. For the people that live here, there’s an adaptation that needs to happen.”

Vézina is right: Quebec City is smaller, colder and whiter than Montreal. These realities are at once points of pride and the source of the city’s enduring inferiority complex. Differences tend to stick out more here than in the boundless absurdity of Montreal, 300 km to the west. And yet if not sticking out is part of integrating, then the Centre Culturel Islamique was a veritable model.

The mosque’s administrators first real foray into politics was to denounce the so-called “Quebec values charter,” a piece of legislation introduced by the Parti Québécois government in 2013 that would have compelled all provincial public servants to remove religious symbols from their bodies during work hours—hijabs and the like very much included. Such a law, mosque administrators said, would “feed the perception of discrimination between Quebecers.” The legislation didn’t pass.

About two years later, in the summer of 2016, a gift-wrapped pig’s head was deposited on the doorstep of the mosque, and the neighbourhood was pamphleted with racist tracts denouncing the presence of Muslims in the area.

“Until last June, I didn’t even know it was a mosque,” says Lyne Rousseau, a retired hospital administrator who lives in a newly built condo development across the street. “It doesn’t bother me at all. They’re immigrants who want a quality of life. The language, the temperature: it’s hard for them.” 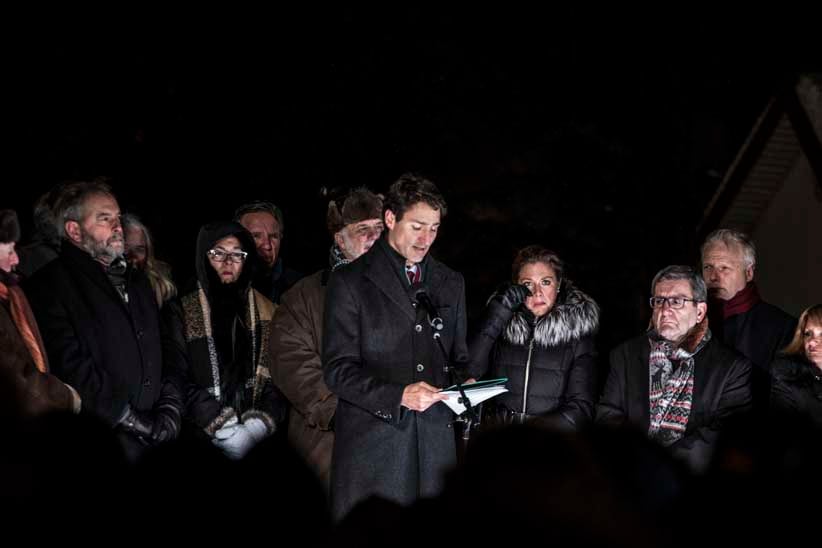 Justin Trudeau speaks in Ste-Foy, a suburb of Quebec city. A large crowd gathered for a vigil The day after the shooting. The Prime Minister, the Permier of Quebec and the Mayor of Quebec city spoke as well as community representatives. (Photograph by Roger LeMoyne)

In the aftermath of such a politically charged tragedy, when social media often morphs into a receptacle of conjecture, prejudice and cheap invective, it is bracing to come face to face with a flesh-and-blood victim of this sort of hatred. I met Mohamed Thabti, 11, on Chemin Ste Foy. His father, Aboubaker Thabti, had been killed hardly 20 hours before. Aboubaker moved his family to Quebec City in 2011 from Tunis. A trained pharmacist in his native Tunisia, he worked as a supervisor at a chicken processing plant.

“He helped everyone,” Mohamed told me in perfect Québécois French. “He helped with translation when several hundred refugees arrived from Syria last year.

“I went to a neighbour’s house when I heard about the shooting, to see it on TV. We heard about the dead and wounded. We called and called his phone, but no one picked up.”

Tarek Dhouibi, one of Aboubaker’s best friends, spoke to someone who was with Aboubaker until about two minutes before the shooting. After prayers, Aboubaker had gone downstairs near the door when the killer entered. “He was probably one of the first people to be killed,” Dhouibi said.

A few hours later, politicians of all stripes climbed a stage to pay tribute to Thabti and the five others who died Sunday night. Justin Trudeau spoke, as did Quebec Premier Philippe Couillard. Jean-François Lisée, who helped concoct the Quebec Values Charter, stood beside Trudeau; last August*, he said burqas should be banned in Quebec before “a jihadist uses one to hide his movements.”

Also on stage was Francois Legault, leader of the Coalition Avenir party. Around the same time, his party spent a considerable amount of political oxygen musing about banning the so-called “burkini” from Quebec beaches. Quebec City Mayor Régis Labeaume, clearly devastated, said the killings “were an opportunity to reject those who enrich themselves through hate.” Perhaps Labeaume was being discrete—though he rarely is.

Hakim Merdassi, a member of the city’s Tunisian association, went further. Addressing himself to the politicians standing behind him, he said, “What happened wasn’t anodyne, Mr. Politicians. Some of you have been pyromaniac firefighters, and today we have all been burned,” he said. Some applauded. Others didn’t.

*Correction: previous version of this said Lisée made the comment in October.