In St. John's, Nfld., the moose are loose 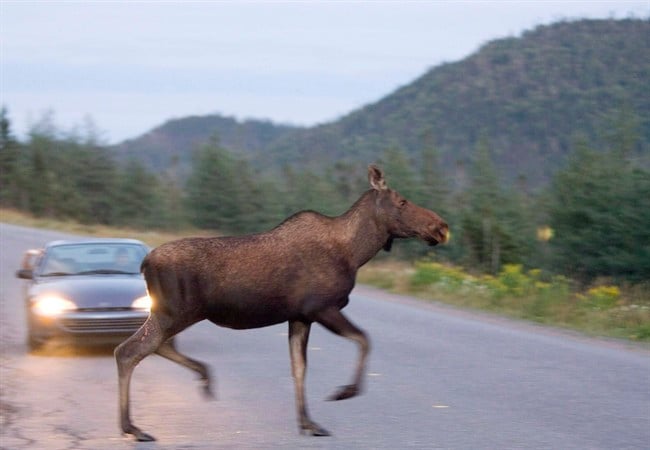 A moose runs in front of a car in Gros Morne National Park, N.L. on August 14, 2007. Newfoundland’s capital is suddenly overrun with moose, with residents reporting close encounters across St. John’s, and police warning drivers to be on the lookout for antlers. THE CANADIAN PRESS/Jonathan Hayward

ST. JOHN’S, N.L. – Newfoundland’s capital is suddenly overrun with moose, with residents reporting close encounters across St. John’s and police warning drivers to be on the lookout for antlers.

“A baby moose just followed my daughter to the bus stop,” one father, Aiden Martin, tweeted on Friday.

The Royal Newfoundland Constabulary said it has received nine calls since Saturday, and asked drivers to be wary. Spring moose sightings aren’t unusual, but the sudden appearance of so many has set social media alight.

Moose were seen munching on breakfast by the highway, strolling by the Rod and Gun club, hanging out in a Wingin’ It parking lot and going to the gym.

After a sighting near a Goodlife Fitness centre in Mount Pearl, the RNC tweeted: “Today was a ‘leg day.'”

Martin said the little moose shadowed his 14-year-old daughter Melanie as she headed to school, so close she could have touched it.

“I was more worried at first,” her father said in an online message, “but since all ended well, I’m glad she had such an experience.”

“(Moose on) Kenmount Road heading West across from Avalon Ford. THAT was a close call #shaking,” Twitter-user @Kimberlydaisy posted.

“Yip, Mr. Moose in the ditch across from Islander Rd. I’m fine but the moose never made it!” Brian Ridgley tweeted, attaching a picture of his wrecked GMC truck and adding a wry hashtag: “#nfldtraffic.”

The island of Newfoundland has the highest concentration of moose in the world. Between 500 and 600 moose-vehicle crashes are reported annually, with five to 10 serious injuries per year and one human death on average.

Every spring, mothers kick out yearlings to go out on their own. The wide-eyed moose sometimes stumble into the city, where they are tranquilized and returned to their habitat.

“You could take a video of us out trying to reel these moose in and put some memes on it,” Higdon said.

“I don’t want to be a police officer in Australia because they probably get snake calls,” he said. “(Australians) probably don’t want to come St. John’s, because we have to haul thousand-pound moose out of backyards.”

He said as a patrol officer, he received up to three moose calls a day.