In the Nova Scotia shooting case, families want answers. 'The truth needs to come out.'

Hundreds of people, led by family members of the victims, marched on the local RCMP detachment demanding a public inquiry into the April mass shooting 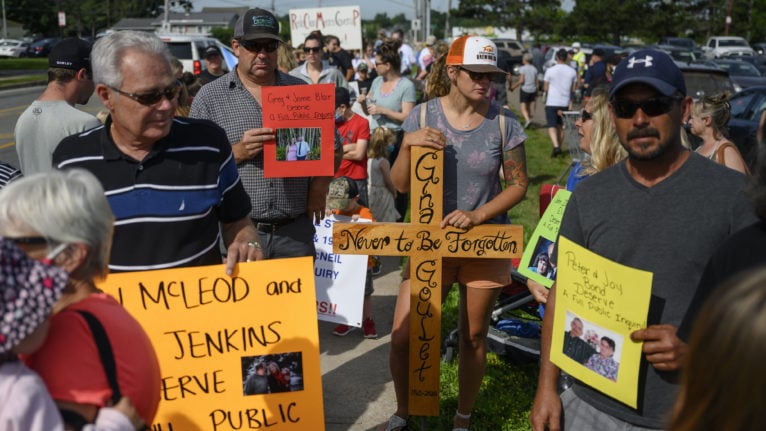 Families and friends of the Nova Scotia shooting victims march in Bible Hill, N.S. on July 22, 2020 (Photograph by Darren Calabrese)

It’s been over three months since the worst mass shooting in Canadian history took the lives of 22 people in Central Nova Scotia. On Wednesday, more than 300 people, led by friends and family of the victims, flooded the sidewalks of Bible Hill, N.S., as they marched to the Colchester RCMP detachment to demand answers about what happened over the two-day shooting spree and how the RCMP responded.

Nick Beaton, whose wife was murdered, and Darcy Dobson, who lost her mother in the shooting, led the charge demanding a public inquiry into the massacre.

In early June, Nova Scotia’s justice minister, Mark Furey, said an inquiry was days from being called. Prime Minister Justin Trudeau has publicly raised concerns about the “many, many questions” surrounding the case. But neither government has committed to an open and transparent inquiry that could address some key questions about what went wrong.

Maclean’s spoke to family members of the victims as they marched this week to ask about the importance of an inquiry to them and their frustrations around the delay in calling one. 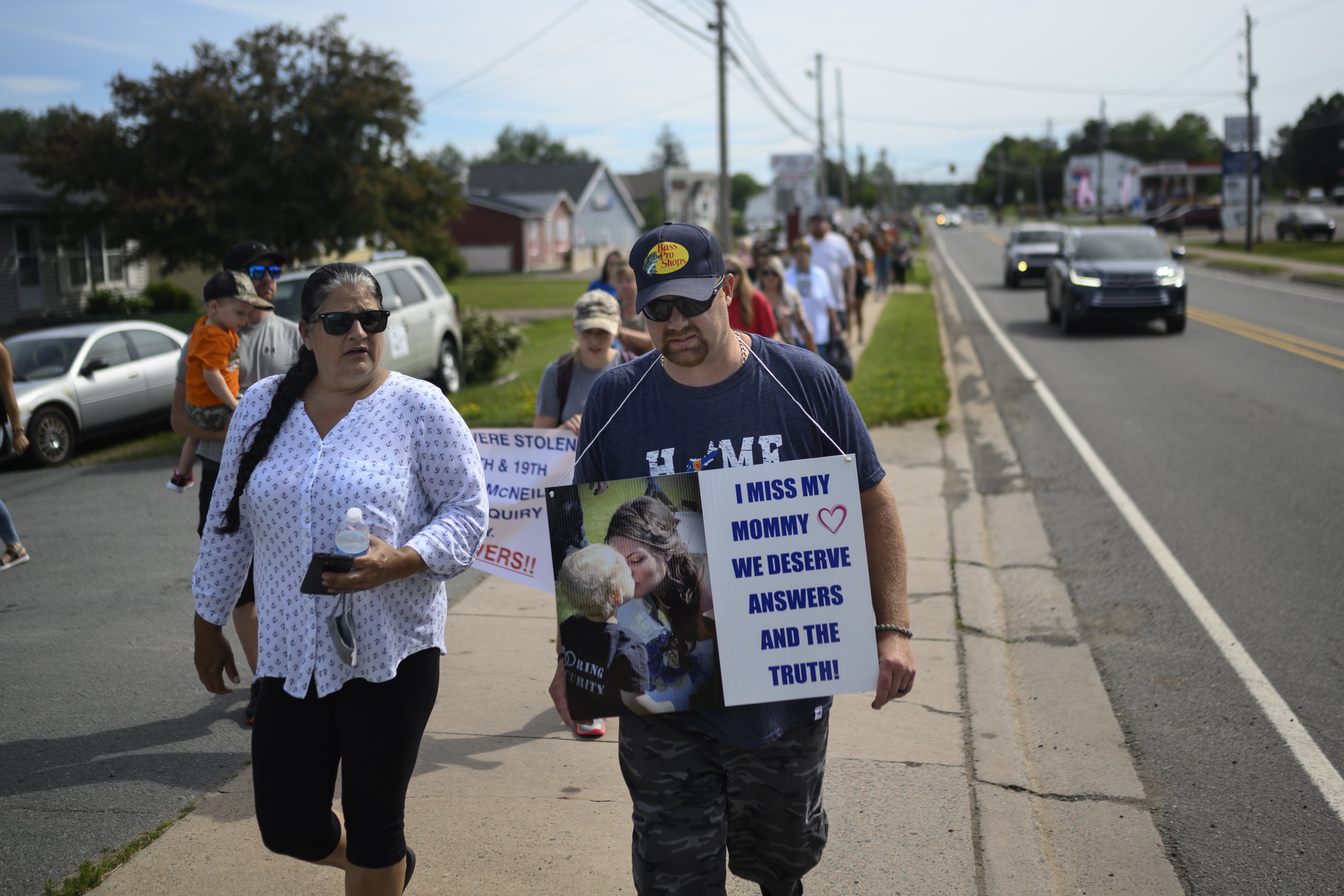 Nick Beaton wears a sign in memory of his wife Kristen Beaton, as he marches in Bible Hill, N.S. on July 22, 2020 (Photograph by Darren Calabrese)

A: There needs to be a public inquiry because the truth needs to come out; the family needs answers, my three-year-old boy needs answers, my unborn baby and wife need answers. We don’t want a probe, we don’t want it analyzed, we want a full inquiry.  Thirteen hours later he was still going; there’s no way that should have been possible. 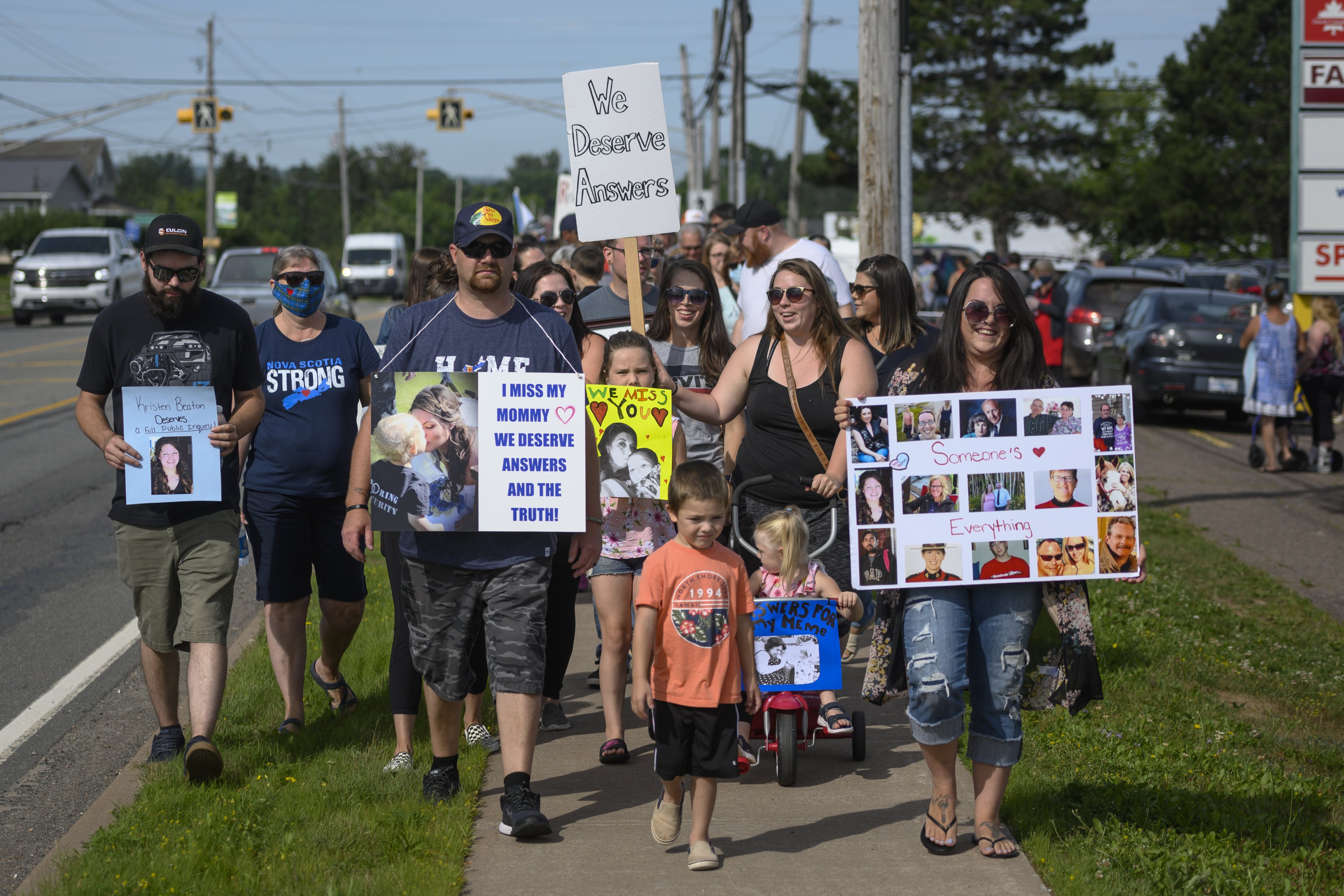 Darcy Dobson (front right), daughter of Heather O’Brien, marches with other family, friends, and loved ones in Bible Hill, N.S. on July 22, 2020 (Photograph by Darren Calabrese)

A: I think everything needs to be pretty transparent at this point because nobody is saying anything, we have a hard time getting any answers at all so we need all of the answers and it needs to be large and it needs to be transparent. The thing with the public inquiry is that there is so much to be learned here. You can’t grieve if you don’t have the whole story. We want to start our grieving process. We just want transparency.

A: I wish I knew because at this point there shouldn’t be a delay.  [Mark Fury] told us on June 2 that there was going to be an announcement for an inquiry and it never happened.

Q: How has the delay affected you?

A: I know that if the tables were turned, my Mom would be standing here doing this for me, so it’s affected me greatly because she deserves the answers, all these beautiful people deserve answers.  There’s more bad days than there is good. 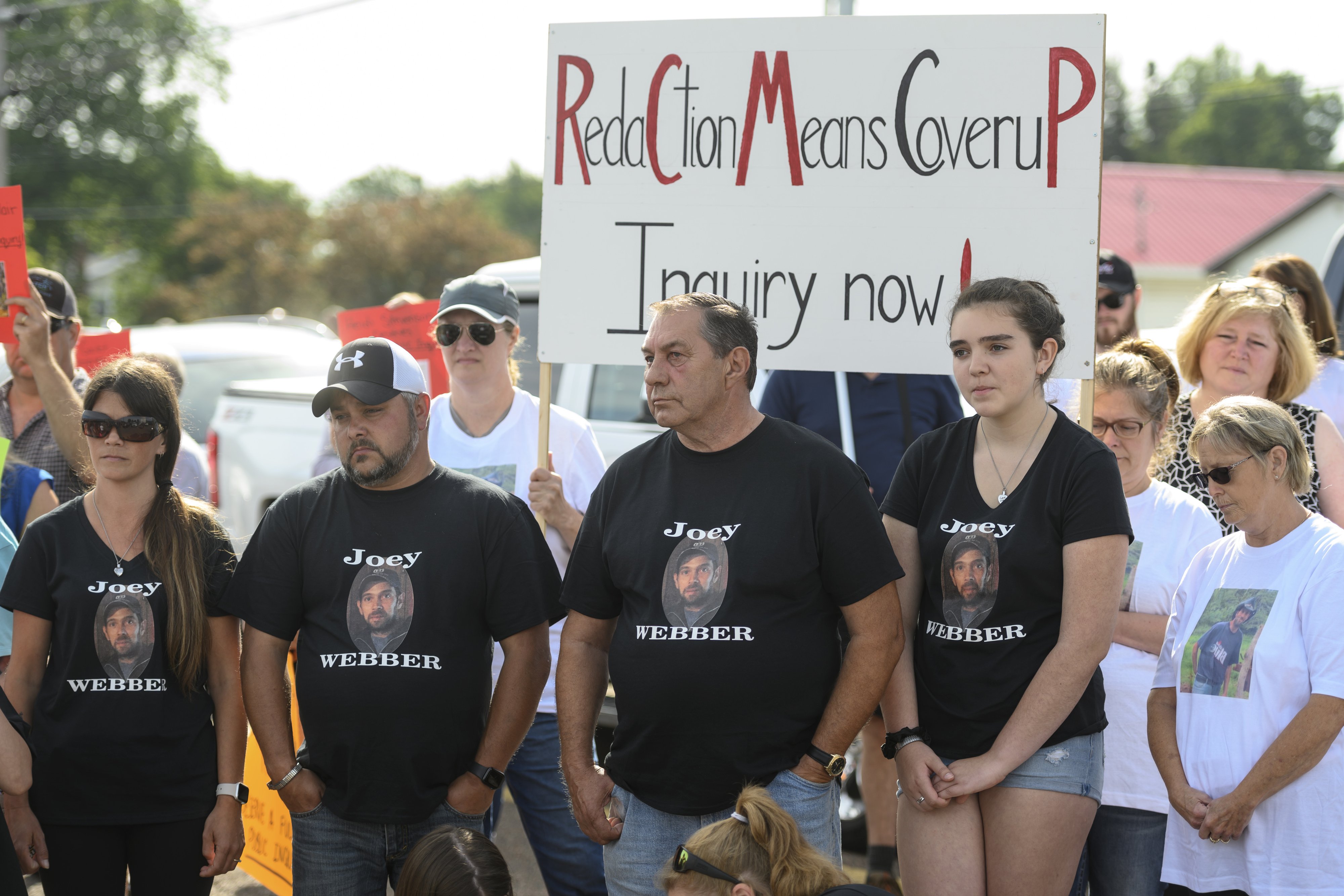 The family of Joey Webber gather with other families of victims to march in Bible Hill, N.S. on July 22, 2020 (Photograph by Darren Calabrese)

A: Answers…answers, just looking for answers and how this all happened. I really don’t know what to say, I can’t even put it into words at the moment.

Q: How has the delay in calling an inquiry affected you?

A: Lots of ways. You don’t get any answers to any of your questions, just simple questions—just that it’s an ongoing investigation and that doesn’t tell you much. 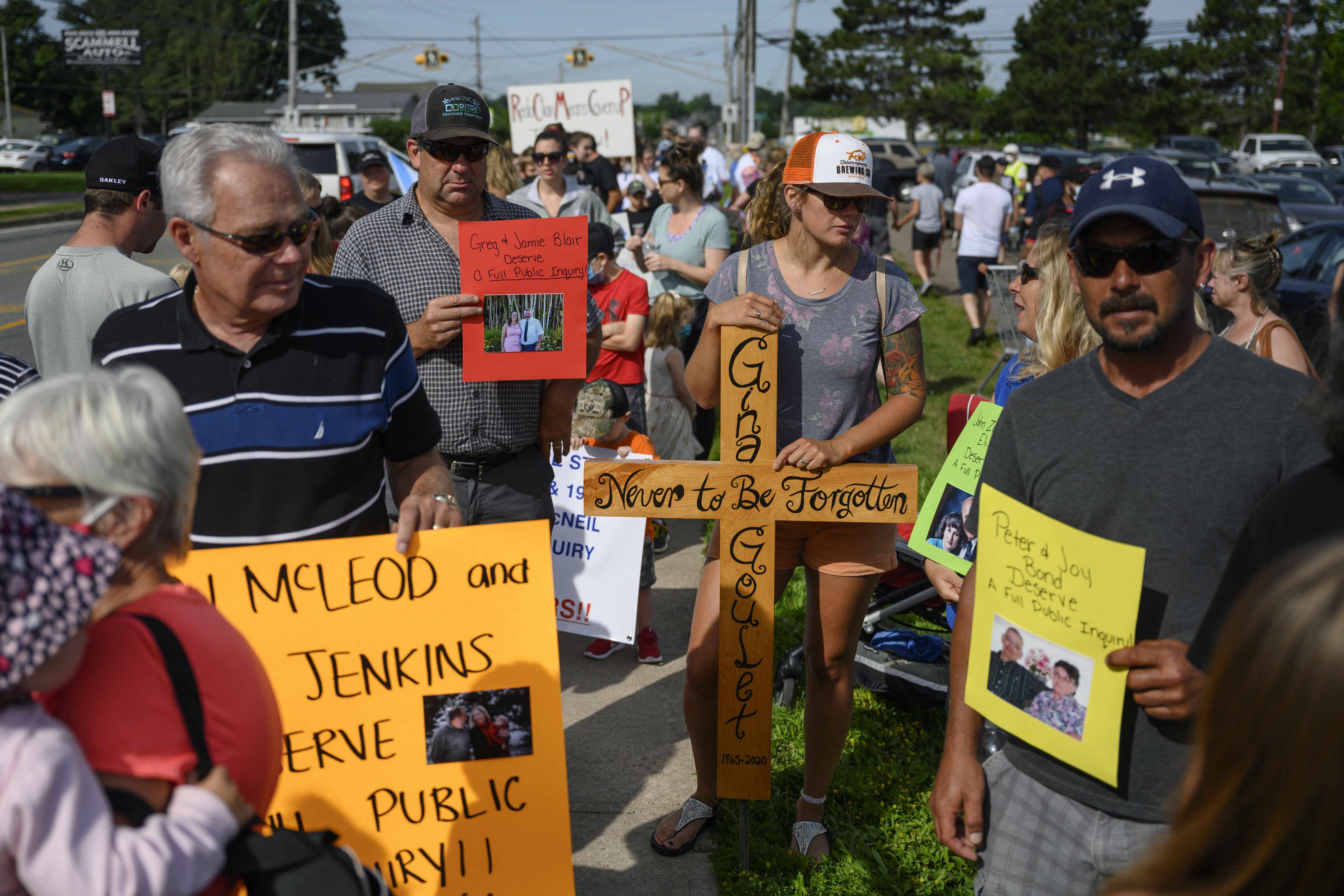 Dan Jenkins (left) holds a sign with his daughter and son-in-law’s names. While Amelia Butler (centre) carries a cross with her slain mother’s name, Gina Goulet. (Photograph by Darren Calabrese)

A: I thought it was the investigation and we’ve had meetings with the RCMP, and they’ve been very upfront with the timeline and that. But I don’t know if we really know all that happened on that night with regards to the RCMP and how they approached and how they handled and what they did in the outcome, for the next morning, for those murders to occur.

A: We’re not here to disrespect the RCMP, not in the least. Some people need these answers.  It will help to understand what went wrong and the things that did go right and these mistakes won’t be made again; there’s no shame in admitting that things went wrong and fix it for the better.