In the wake of Alberta's natural disaster, shockwaves on the Canadian economy 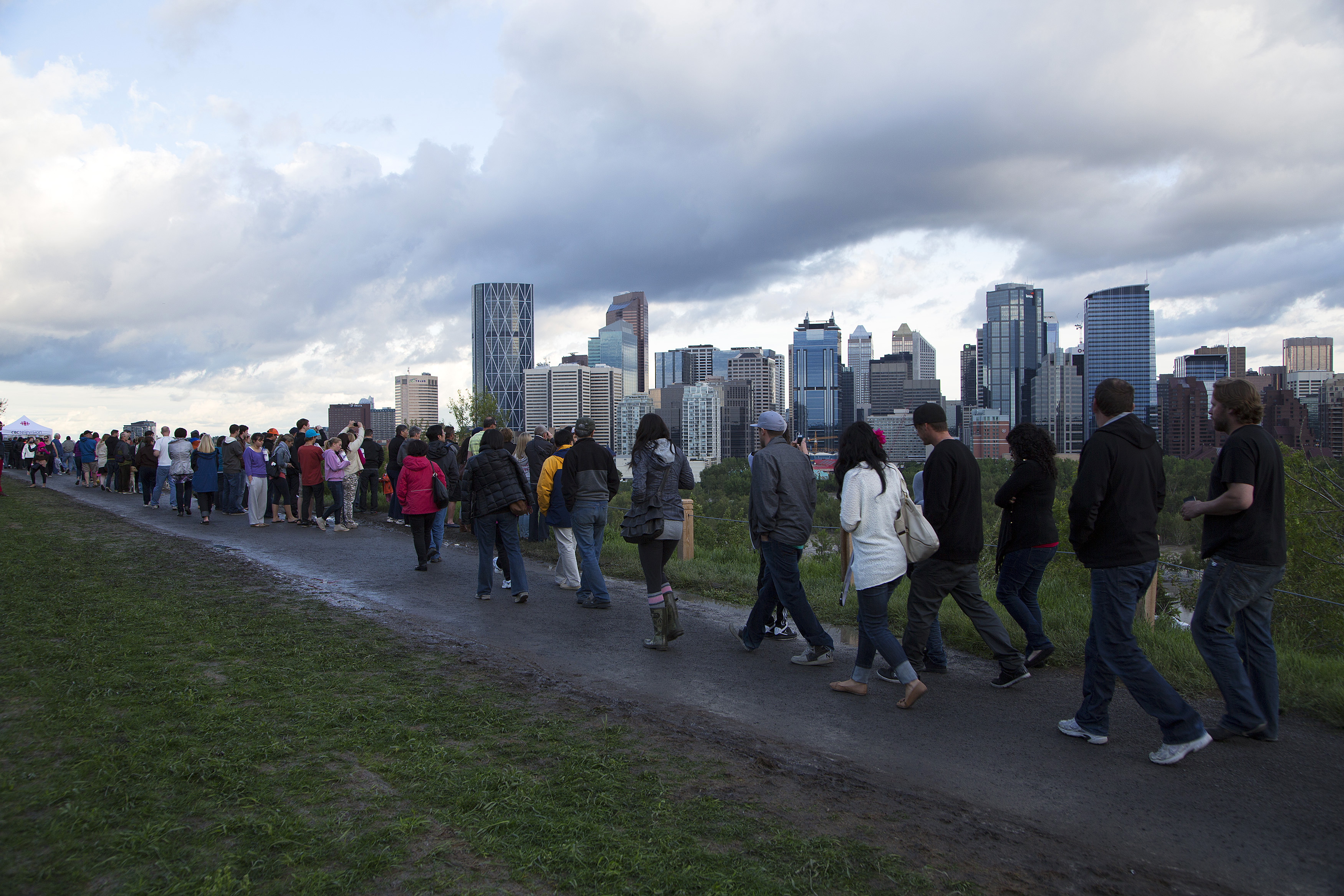 The flooding Bow River shut down all of the centre of Calgary, Canada's oil capital and forced tens of thousands of residents to leave their soggy homes. Many communities across southern Alberta are on mandatory evacuation orders because of severe flooding. Todd Korol/REUTERS

Bruce Graham rode his bike to work in downtown Calgary Monday morning. He pedalled through muddy streets, past vacant buildings and through police checkpoints. “It was amazingly quiet and uninhabited, particularly as you got into the east part of downtown,” says Graham, the president of Calgary Economic Development. In a city normally bustling with activity—the centre of Canada’s oil and gas industry, and the most important business hub outside of Toronto—he could hear only one thing: the whine of gas-powered generators. It was the sound of economic disaster.

It was the first time Graham had been to the city’s flood-ravaged downtown core since the previous Thursday. That’s when he was hosting an oil industry event about the controversial Keystone XL pipeline. Several of the attendees, which included oil patch executives, were forced to leave early as evacuation orders were handed down by the city. “The Keystone XL is one of the most discussed items among industry here,” Graham says. “But this flood was probably one of the few things capable of distracting people’s attention.”

And it continues to do so more than a week later. The province suffered between $3 billion and $5 billion in damages, according to initial estimates from the Bank of Montreal, and faces a long and painstaking cleanup. Alberta Premier Alison Redford has already promised to spend $1 billion on the recovery effort. The money will go to both infrastructure spending and to help residents who have been forced from their homes, with those who qualify receiving debit cards loaded with $1,250 per adult and $500 per child. Ottawa has also pledged to help.

But the economic fallout will be far greater than what the government and insurers will dole out. Sections of railroads and parts of the Trans-Canada Highway were shut down for days, hundreds of businesses were forced to close and the province’s tourism industry was taken offline on the eve of one of its biggest events: the Calgary Stampede. Once the costs are all added up, Alberta’s flood threatens to send waves crashing over Canada’s already wobbly economy.

BMO economist Robert Kavcic says his preliminary calculations suggest the initial impact of the floods will shave a tenth of a percentage point, or about $2 billion, off Canada’s GDP in the month of June, although he cautions that “it’s next to impossible to make an accurate guess because there are so many moving parts.” That estimate includes lost productivity, with nearly 180,000 workers told to stay home from work for several days as Calgary’s downtown was turned into an urban swamp. Many of those people, along with thousands of others in Alberta, are also dealing with the personal impact of the flood as they return home to soggy basements full of ruined appliances and furniture—most of which won’t be covered by their insurance.

While many of Alberta’s biggest corporate residents—companies like Suncor Energy Inc. and Encana Corp.—had contingency plans that allowed them to continue working even as the city’s downtown core went dark, the same can’t be said for the hundreds of smaller businesses that make up a significant chunk of the city’s $120-million-a-day economic output. Adam Legge, the CEO of the Calgary Chamber of Commerce, says the city is losing “tens of millions” each day that small shop owners and restaurateurs stay closed. More ominously, he cites U.S. research into similar disasters that suggests as many as 43 per cent of them will never reopen their doors, dragged under by lost business and crushing cleanup costs. “We want to do everything we can to prevent that from happening,” Legge says.

The list of those financially affected by the Alberta floods goes well beyond Cowtown. Washed-out roads and bridges throughout the province have created logistical nightmares for transport companies and the businesses and consumers—from coast to coast—that rely on them. Canadian Pacific Railway said its crews responded to some 40 different flood-related emergencies in Alberta and B.C. during the crisis, forcing it to re-route trains. The railroad said earlier this week that its crews had restored its main line tracks west from Calgary toward Canmore and Banff, as well as a portion of track in Calgary. Another segment of CP’s track to the south was expected to be fully repaired later in the week. Ed Greenberg, a CP spokesperson, said he didn’t have an estimate for how much floods had cost the railroad, but the company said it was nevertheless sticking to its financial guidance for this year.

Canadian Tire, among the few national retailers with a significant presence in many smaller communities, managed to keep the lights on in all of its stores throughout the crisis—but just barely. Mike Walsh, vice-president of store operations, said employees at a Canadian Tire in Canmore were forced to roam the aisles last week with flashlights as they helped local residents stock up on essentials like batteries and bottled water. The company also required a police escort to get one of its tractor-trailers into the hard-hit community. So far, eight tractor-trailers filled with high-demand items like flashlights and pumps have been dispatched to Alberta from a distribution centre near Toronto. “The customer focus changes from needs and wants to just needs,” Walsh says. “All of sudden it’s all about rubber boots and sleeping bags.” Indeed, if there’s a glimmer of good news amid all the damage, it’s that the economy will benefit in the long term as consumers and businesses spend money on rebuilding their damaged properties, buying everything from lumber to Shop-Vacs.

But that’s of small consolation to those actually footing the massive repair bills. Though many would assume that flood damage is exactly the sort of thing you buy insurance for, the industry doesn’t sell protection from so-called “overland” flooding, or floods that result from rising rivers or streams. “We’re not aware of anyone that offers it,” says Steve Kee, a spokesperson for the Insurance Bureau of Canada. By contrast, flooding that stems from things like backed-up sewers or a cracked water main may be covered—providing the homeowner has purchased the appropriate policy add-on. “If you think of the purpose of insurance, it’s to spread risk among many policy owners,” Kee explains. “But overland flooding is a risk for what works out to be a small percentage of the population who live in flood plains or flood-prone regions. Most homeowners don’t want to share that cost.” Vehicles are an exception since most comprehensive policies include coverage for rising water. Commercial properties may also be covered, but policy-holders are usually required to pay a large deductible of $10,000 or more.

BMO has estimated that about 25 per cent of the damages suffered in Alberta won’t be covered by insurance. Kee, meanwhile, says the 2005 floods in Alberta ultimately resulted in about $300 million worth of claims, and adds, “I think it’s safe to say it will be more than that this time around.”

Alberta’s $7.8-billion tourism industry is also at risk of suffering unrecoverable losses. “If you look at what happened in Banff and Canmore, that part of the province was basically shut down,” Kavcic says. “So that’s a week or two of zero tourism in the area. And that you never get back.”

Organizers of the Calgary Stampede are acutely aware of the high stakes. The annual bash pumps hundreds of millions of dollars into the economy, drawing visitors from all over the world into local hotels and restaurants. At a news conference overlooking the waterlogged Stampede grounds, CEO Vern Kimball promised that the event would open on schedule next month despite the fact that the Saddledome was still full of water, as were several other venues. “At this time we haven’t even looked at what it’s costing,” Kimball said. “What we’ve been doing is fielding calls from folks saying, ‘We want you to put on this Stampede,’ so we’ve been addressing our concerns as to how we’ll make that happen.”

It promises to be a much lower-key affair than in previous years. Calgary’s big oil companies, and the law and accounting firms that service them, have traditionally thrown swank parties costing tens of thousands of dollars. The events can host as many as 2,000 attendees and feature headline country music acts, and are a way to win new business clients. Prior to the flood, the trend was toward bigger and more lavish bashes, says David Howard, the president of Calgary’s the Event Group, which had signed on to throw some 70 different soirees this year. “My guess is that about half of our Stampede events won’t happen,” Howard says. For one thing, several of the city’s most popular event spaces, including those located at the Stampede grounds, were recently completely under water. Companies are also understandably wary of appearing to celebrate while so many people are suffering. “You don’t want to put on a half-million-dollar Stampede party and really whoop it up while there are still people who are homeless,” Howard notes. Instead, Howard is encouraging clients to work with local charities to raise money for the relief effort. “Cowboy boots and lifejackets, that’s what we’re saying.”

Photos of the Saddledome released Sunday by the Flames: 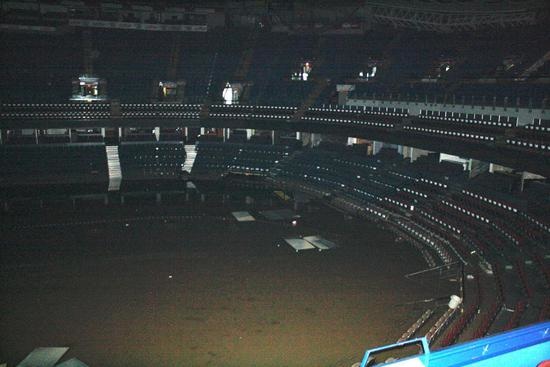 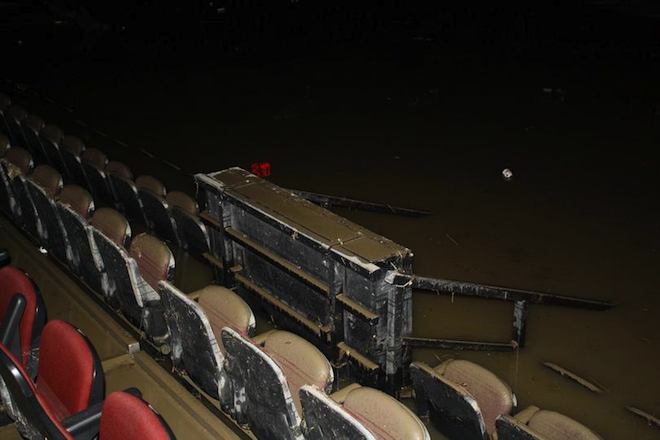 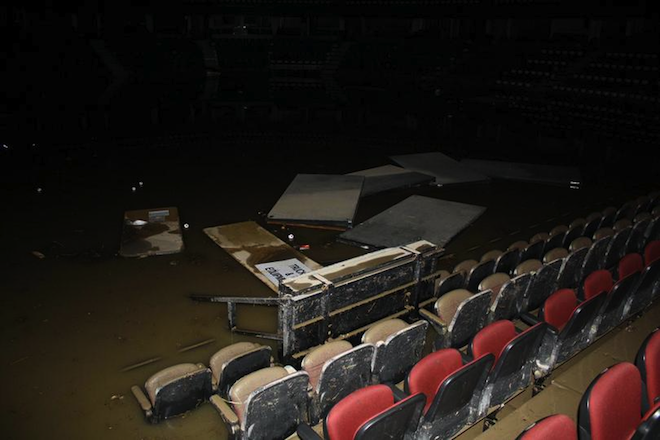 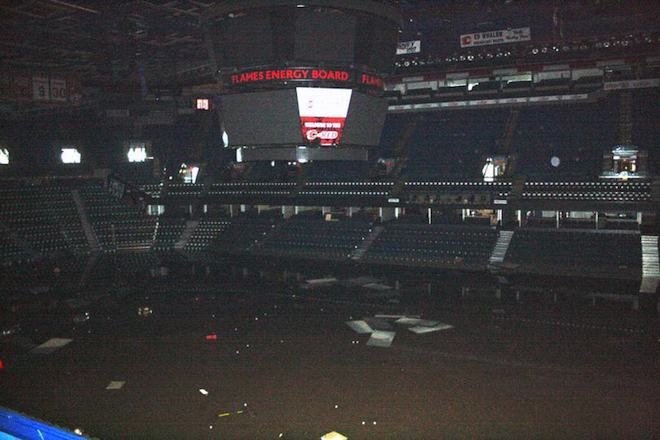