In this B.C. mansion, a massive bat colony hangs on for dear life

Scientists are keenly watching the Burrvilla bat colony, believed to be B.C.’s largest, for the deadly white-nose syndrome. If it arrives, all they can do is hope the killer fungus shows mercy. 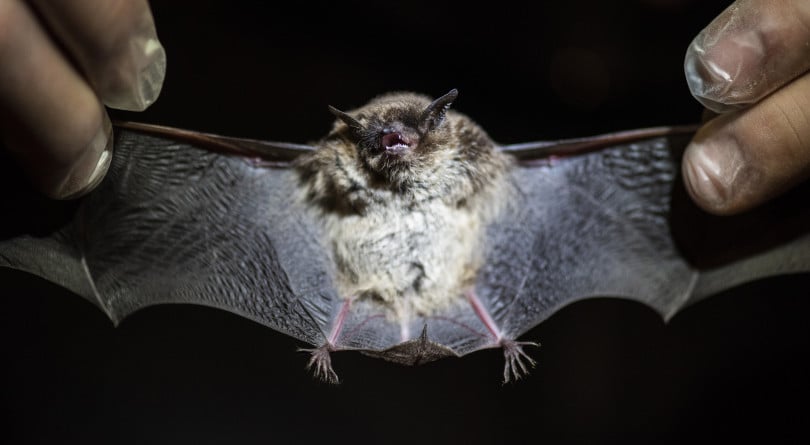 The nets are strung before dusk, feeding time for about 1,500 famished female bats already chirping in their attic roost in Burrvilla House, a historic farmhouse in Deas Island Regional Park, south of Vancouver. As the sky darkens to indigo, bats pour from the rafters to chase swarms of equally famished mosquitoes. The Burrvilla bat colony, believed to be B.C.’s largest, is home to two species, Little brown myotis and Yuma myotis. Mature females raise their single pups in the attic and by summer’s end, as many as 3,000 bats will cohabit in the Burrvilla mansion. For the past three years, the South Coast Bat Conservation Society with the help of mostly volunteer biologists has monitored this colony for white-nose syndrome, a disease that has decimated bat populations in Eastern Canada and parts of the United States. But to study bats, one must ﬁrst catch them. The nets used for this are positioned between two tall bushes framing the driveway, a flight path so familiar to the bats that many won’t bother to turn on their echolocation navigational system, making them less likely to detect the nets.

Suddenly, bats are everywhere. Some skirt the trap and blast past at eye level. The uninitiated instinctively duck—needlessly, because bats are agile and easily spot people. The ﬁrst bat to strike the ﬁne mesh net ricochets off and lands on the ground stunned, where a biologist scoops it into a soft cotton bag. The second gets stuck, followed over the next hour by about 30 more. Patrick Burke, a wildlife ecologist with the society, deftly untangles a feisty Little brown myotis. It promptly sinks its fangs into his gloved hand. The bat’s body is the size of a small ﬁeld mouse and its teeth are practically microscopic, but bats can carry rabies. Burke’s vaccinations are up to date. He gently blows on the animal’s face until it releases its grip and pops it into a bag unharmed. Volunteers run the bats to a building next door for tagging and health testing. The youngest is nine-year-old Caelum Chiem who has an encyclopedic knowledge of all things batty. His parents let him stay up late for the event. “I love bats. I read books and watch documentaries about them,” he says.

READ MORE: Canada is losing a war against feral pigs that are infesting the Prairies

Burke and the other biologists and volunteers admire these tiny mammals both for their place in the ecosystem as huge insect consumers and their ingenious biological sonar systems that allow them to navigate in the dark. Although plentiful now, biologists worry B.C. bats will eventually fall prey to white-nose syndrome (WNS) caused by a fungus now killing bats in Washington State, Burke says. “To the best of our knowledge, it has not spread to B.C.—with the important caveat that we are not monitoring very closely.”

Bats provide a valuable service for humans; a nursing female eats her weight in insects every night, which studies surmise reduces the amount of pesticide use by farmers. Even so, bats—with their nighttime proclivities and seemingly erratic flight patterns—get a bad rap. “Bats are misunderstood,” Burke says. “People think they drink blood and fly in your hair.” And a roost, which may seem like a fascinating ecological phenomenon to one person can look a lot like an infestation to another. That’s how former Delta mayor Lois Jackson saw it when she mounted a push to block bats from Burrvilla House, one of the municipality’s most historically signiﬁcant buildings. A caretaker lives below the attic of the towering Queen Anne Revival home. He likes bats and is happy to coexist with them, but he doesn’t enter the attic, which has an ammonia-like stench. The cleanup, done by a contractor hired by Metro Vancouver Regional Parks, was key to a truce with the politicians. Every year, plastic sheeting is placed in the attic and stripped away along with the summer buildup of guano when the bats leave to hibernate for the winter. 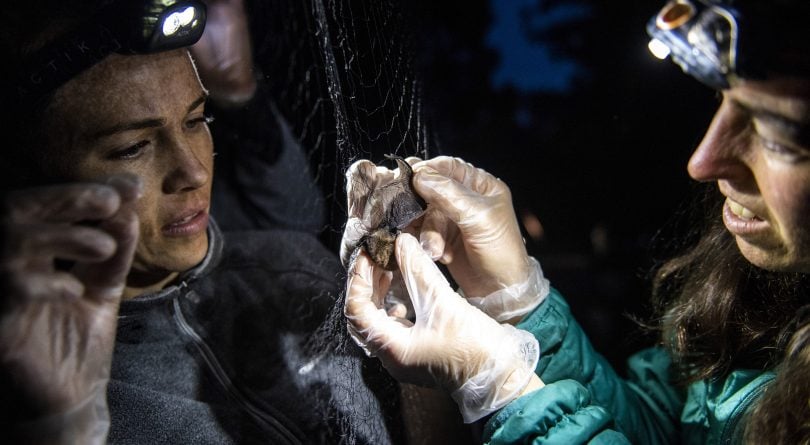 On this Saturday in early June, the group of scientists is tagging bats with tiny radio transmitters to monitor how many return next year. They also swab their wings to test for WNS, which, in North America, where the bats have no immunity to the disease, typically wipes out 95 per cent of an affected population. Since WNS ﬁrst arrived in Canada in 2009, four bat species, including Little browns, have been added to the country’s endangered species list. The fungus is transmitted by microscopic spores that scientists believe were inadvertently carried to North America from Europe in 2006, possibly on the soles of someone’s boots, says Jordi Segers, bat WNS program coordinator for the Canadian Wildlife Health Cooperative, from his Prince Edward Island ofﬁce. It strikes in winter, causing the bats to dehydrate and prematurely end their hibernation in search of food and water. When they can’t ﬁnd what they need, they die.

The disease struck ﬁrst in Ontario and Quebec, then cut a swath across the Maritimes and most recently surfaced in Manitoba in 2018. Segers lived in Nova Scotia when the disease was peaking there. “I’ve seen the devastation in some of the caves, literally walking on corpses when you’re doing your surveys. It’s a very sad sight to see.”

There is little biologists can do but watch for the disease (there is no known treatment) and hope the death toll here may be lower: in B.C., the hibernation spots where the bats winter are more spread out than the concentrated mines and cave locations in the East. And the South Coast group is so committed that its members stay until 4 a.m., when the last animal is tagged. To them, with an existential threat on the horizon, keeping vampire hours for the sake of the nocturnal creatures is a small sacriﬁce.

This article appears in print in the August 2019 issue of Maclean’s magazine with the headline, “Don’t leave them hanging.” Subscribe to the monthly print magazine here.