In Winnipeg, a meaningful stand against racism

Nancy Macdonald on a watershed moment for Winnipeg that united the city, and how it all came together 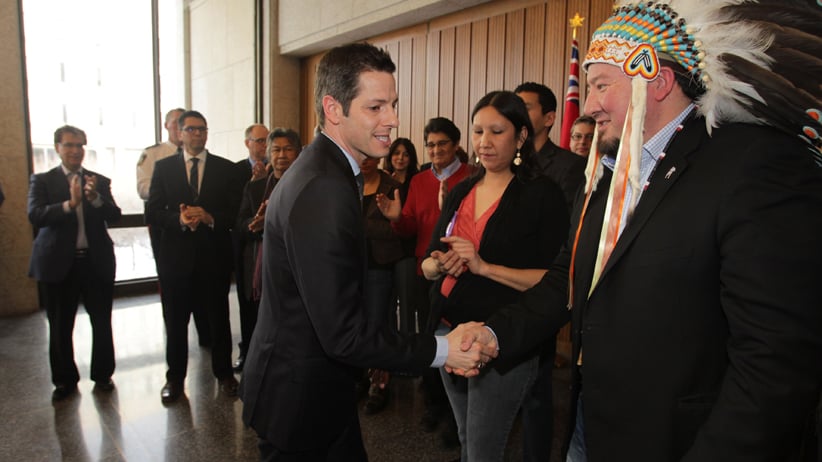 This week, Brian Bowman, the recently installed mayor of Winnipeg, said he plans to roll out a new website: 1Winnipeg.ca, a new forum for ideas for tackling racism. He unveiled it on CBC’s morning drive-in show, which taped live from the city’s troubled North End. His new Facebook profile bears the new One Winnipeg logo, and its tag: “Stand up, be strong and talk about racism.”

It was the latest in a series of remarkable moves made by Bowman, indigenous leaders and the city at large in reaction to a recent Maclean’s feature that said Winnipeg is the place where Canada’s ugly racism problem is at its worst.

Two-and-a-half hours after he first read the story last week, Bowman convened a press conference. Beside him stood about 30 of the city’s most prominent indigenous and civic leaders, including the chief of police and two university presidents. “Ignorance, hatred, intolerance, racism exist everywhere,” he declared. “Winnipeg has a responsibility right now to turn this ship around and change the way we all relate.” Others, including former national chief of the Assembly of First Nations Ovide Mercredi, who spoke briefly in Cree, and Manitoba Grand Chief Derek Nepinak, expressed similar concerns with the state of racial tension in the city. “I want people to continue to stand up and be strong . . . Talk about the racism that you experience in the stores in this city and across the country,” said Nepinak. “Let’s have this dialogue now, because we are strong enough as a society to overcome these challenges together.”

Interactive: In their own words, Winnipeg leaders discuss a momentous day

Editorials across the country applauded the reaction. The Ottawa Citizen called it “extraordinary and praiseworthy.” The Winnipeg Free Press said, “Mayor Bowman’s call to action was not merely about rescuing indigenous peoples; it’s about saving Winnipeg itself.” The National Post called it “a heartening reaction coming from the city with Canada’s largest Aboriginal population—one that ought to steel national resolve to do better by them.”

All week, offers of help came pouring into Bowman’s office—from the mayors of Regina and Calgary, from former prime minister Joe Clark and countless Winnipeggers, both Aboriginal and non-Aboriginal. This week, his office sent out a save-the-date inviting 100 civic and national figures to a press conference on Jan. 22, 2016, a year to the day Maclean’s released its story on Winnipeg. Bowman says he intends to tell the country about the change and progress in the fight against racism in Winnipeg. “We’re going to continue to build bridges between people. We’re going to increase understanding. We’ve already started down the path of reconciliation.”

There has been some negative reaction to the story, notably, from the Winnipeg Sun’s columnist, Tom Brodbeck, and local radio host Dave Wheeler, who believe the article overstates the degree of racism in their city. But Bowman says the feedback from Winnipeggers has been overwhelmingly positive. “People are proud of their city. It struck a chord. Whenever someone takes aim at Winnipeg, it hurts. But what hurt worse was the truth in those pages,” he said. “I’m in office because I want to make a difference.”

Related: You can build a better Canada, or you can get out of the way

It began at 9:30 a.m. last Thursday, when Winnipeg Mayor Brian Bowman sat down to read Maclean’s cover story describing Winnipeg as “arguably becoming Canada’s most racist city.” The story (written by this reporter) centred on the unsolved murder of teenager Tina Fontaine and outlined the struggles of Natives living in the city’s North End neighbourhood. “I had to put it down a couple of times,” he says. “I had troubles reading it, emotionally. But, as much as I didn’t like the headline, when you read the story, you can’t argue with the tragedies and statistics it chronicles.”

By 10:30 a.m., his response was clear. He and four staffers spent the next 45 minutes calling, texting and tweeting the city’s indigenous leadership and civic leaders of all political stripes. “They dropped everything and they came out,” says Bowman. He wanted them united behind him when he addressed the magazine piece.

By 11:30 a.m., most had arrived; some had walked out of meetings or cancelled appointments to be there. The mood was sombre, emotional. North End youth activist Michael Champagne led a smudge, a spiritual purification ceremony, explaining its importance to city staff, councillors and business leaders who’d never smudged before.

Wab Kinew, the journalist and associate vice-president of indigenous affairs at the University of Winnipeg, was offered tobacco and called upon to lead an Ojibwe prayer. He called for those assembled to stand behind his friend the mayor at this difficult moment. Then he led the group in a traditional song. “The idea,” Kinew says, “was to set a positive tone—of unity and mutual understanding—so we’d all come out with a compassionate and understanding and humble frame of mind.” The significance of the moment wasn’t lost on anyone in the room. “It was amazing,” Coun. Jenny Gerbasi says.

Then Bowman spoke. Gerbasi didn’t know what he was going to do, as a new mayor. She says the article “was a slam against our city—at least, it felt that way to some people.” So much was at stake. “Had he come in and denounced the article,” says treaty commissioner Jamie Wilson, “half the Aboriginal leaders there would have walked out. It would have created a real argument, and deep divisions in the city.” To many in the indigenous community, a denial would have felt like a slap in the face. “Instead,” says Gerbasi, Bowman “faced the truth.”

“This is an issue we’re going to have to face head-on,” Bowman told the group before they left the mayor’s office to face cameras. “We can’t run from this. We all need to work together, and I’m committed to this.” The response seemed deeply genuine and honest, says Wilson. “It took a huge amount of courage; he was showing our vulnerability as a city. He was stepping forward and saying: ‘We’re vulnerable, we have weaknesses, racism is a problem.’ But if you’re truthful and honest, people will rally behind you. And we did.” Bowman pushed open the doors and the leaders came walking out one by one.

The mayor, choking back tears, said Winnipeg had to do better, that Canada had to do better. Partway through, he ditched his prepared notes. He became emotional while discussing his own Metis heritage and his hopes that his sons will be proud of that inheritance. A CBC reporter tweeted that she’d never seen so many Aboriginals at city hall before.

To David Barnard, president of the University of Manitoba, it was “an opportunity to declare collectively that a lot of us are committed to doing things differently.” To Gerbasi, it was about turning a new page in civic history. There were few dry eyes when the press conference was over; the group parted with hugs and promises to do better. “Being in that room was like the moment John F. Kennedy died. I’ll always remember it,” Wilson says. “It was a watershed moment for the city.”

City leaders were not the only ones tackling the issue. Teachers at three different high schools told Maclean’s they threw out lesson plans for two days last week. Their classes read the article aloud together, using it as a starting point for discussion. “Every dinner table in Winnipeg was probably having a chat about what is racism, who is racist, and are we really,” says John Orlikow, councillor for River Heights-Fort Garry. Chaplain Dave Chell led a worship calling on his parishioners to push “for the good that can flow from this.” 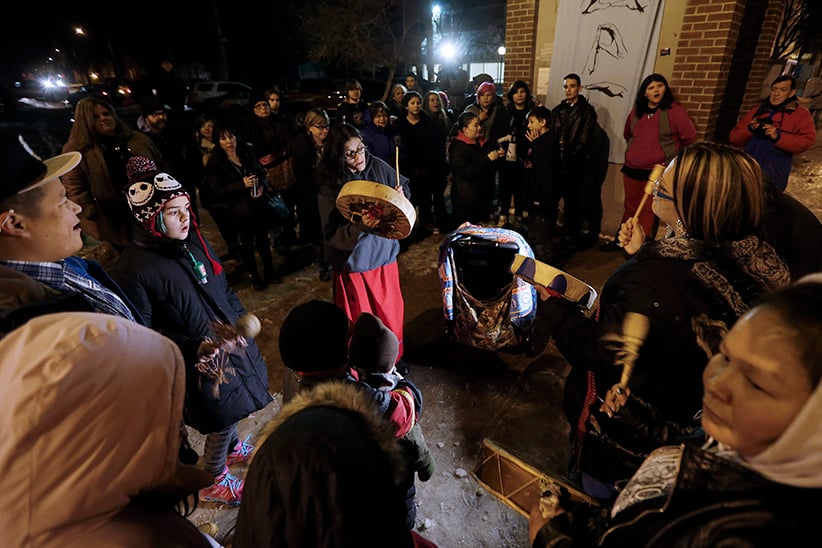 At first, Kevin Chief, MLA for the North End riding of Point Douglas, was angered by the article, “which said such terrible things about my city, my lifelong neighbourhood, and my home.” But he agreed to meet with Maclean’s last week and took this reporter for a cold walk past his childhood home. As he read the piece, he said he began to see it as an opportunity. He was on the phone until 3 a.m. that night, speaking with Mark Chipman, chairman of True North Sports and Entertainment, which owns the Winnipeg Jets, and Ginny Devine, the wife of Canadian diplomat (and former Manitoba premier) Gary Doer.

The article “has triggered a very personal response in this city, and many of us are still trying to measure the scale of its impact,” he wrote in a personal essay for this week’s tablet edition of Maclean’s. “If we can use the sense of vulnerability from [Maclean’s] stories as a starting point to share our own, I hope we can find more common ground and build more understanding.”

On a visit to a North End youth meeting, things had clearly changed from the first time Maclean’s attended in December. Talk was more urgent, focused on the issue of anti-racism. Indigenous youth activist Jenna Wirch said the week’s debates had opened the “floodgates” on a dialogue that is essential and long overdue. “We’re making history right now,” Wirch added, shaking her head. “It’s been an amazing week.”

Pierre Dumont, who works in communications, says he’s had deeper, harder conversations about racism and addictions with his Aboriginal friends this week than ever before, even with people he’s known closely for decades. They’ve told him things they would have otherwise never shared, he adds.

In the last couple of days, Cree poet Duncan Mercredi says he’s received so many smiles and hellos from strangers that “it’s starting to feel a little freaky,” he wrote in a Facebook post this week. “It just happened again on my walk to the corner store—a ‘good morning’ from a stranger. It’s going to take a while getting used to this new world order.”

—With files from Rachel Browne and Genna Buck