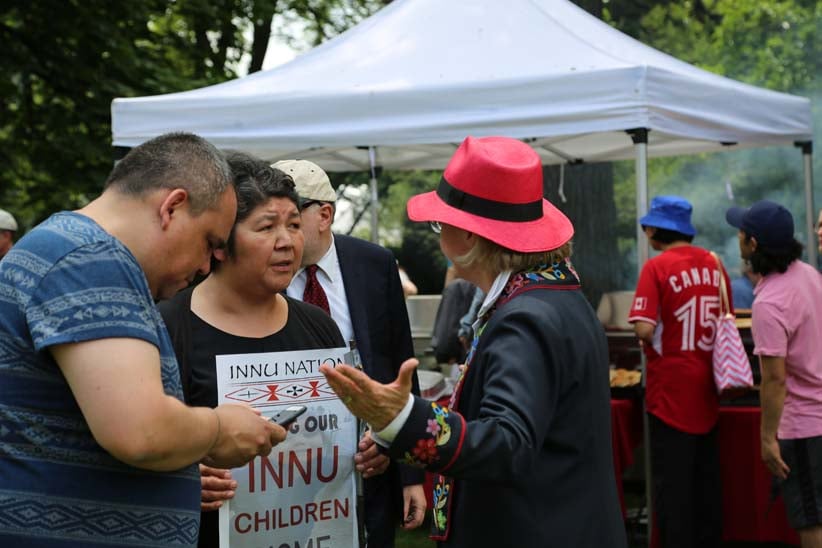 A mob besieged the Edwardian estate where Carolyn Bennett had invited Indigenous demonstrators for hot dogs. The activists marched into the venue chanting a song about Section 35 of the Constitution, their leader, Tori Cress, peeking at lyrics in the belly of her drum until they fully advanced on the lawn, at which point Cress gave her drum one last boom and declared, “alright, let’s have a picnic.”

Bennett holds her annual St. Paul’s riding Canada Day picnic at the gardens of the Spadina House Museum in Toronto. As federal minister of Indigenous and Northern Affairs, Bennett this year specifically welcomed Indigenous voices to “tell your truths and share your stories.” But other picnickers weren’t prepared for picket signs, creating an awkward tension between folks talking about cold beer; others, cold cases, as battle cries cut off the quartet.

“No more stolen children! No more children in the rivers!” about 80 demonstrators yelled. A teacher bounced a sign that explained how First Nations students receive 30 per cent less funding (her facts complete with a citation), and another protester shouted about Heritage Canada spending $500 million on the Canada 150 party (Bennett hasn’t yet filed expenses for her own July 1st event). From Labrador, Innu leader Simeon Tshakapesh yelled at Bennett in tears about his deceased son, and Innu Grand Chief Anastasia Qupee told her about a six-month-old baby who’d returned from foster care with a head infested with lice.

Meanwhile in the hot dog line, a patriot had morphed her head into the shape of a maple leaf with a hat from Giant Tiger. Joel Shuster and his wife had set out in the morning to see a giant rubber duck floating on Lake Ontario, but they noticed police near Spadina House and got nosy. Shuster says of the protest: “All you can do to people is make them curious. People who don’t want to learn can’t be forced, and people who want to learn can’t be prevented.”

O Canada was uncomfortable. Nay-sayers shook instruments and chanted, “shame!” at a volume that didn’t quite drown out the anthem but rather blended the noise.

“I think the word ‘birthday’ really bugs them,” Bennett told Maclean’s. “My job is to decolonize,” she said, and she agreed to meet with protesters the next day. “I don’t turn down meetings.”

Few Canadians turn down hot dogs, drawing an eclectic crowd. A neuropsychologist showed up around the same time as a man who said he had been illegally evicted, whose hair had dreadlocked so heavily that now it painfully knocks against his clavicle when he skips rope.

The original Spadina House was built in 1818 by William Baldwin, a doctor and certified lawyer without legal training, who immigrated from Ireland with a wave of settlers seeking cheap land (though he told his story as if he were a refugee escaping Irish civil war). Baldwin’s interests included metallurgic experiments, Gulliver’s Travels and flute, and he set his sights on a piece of land called Sugar Loaf Hill, which was renamed Spadina, a shortened form of the Ojibway word for ‘hill.’

“End Canada!” one pamphlet demanded at the Bennett’s event. “F—the150.”

Rain ended the festivities. “I think we’re very happy that the Creator has managed to hold it off this long,” Bennett told the crowd. She wore a blazer made by an Indigenous artist, but she eventually covered her “reconciliation jacket” with her rain jacket and left for her next event. Her day had begun with a 5:15am traditional sunrise ceremony, but she still had energy to last her until the fireworks. “I used to deliver babies!” she told Maclean’s of her former work as a family physician. “I delivered thousands of babies.”