Inside the private lives of the Toronto Zoo's giant pandas 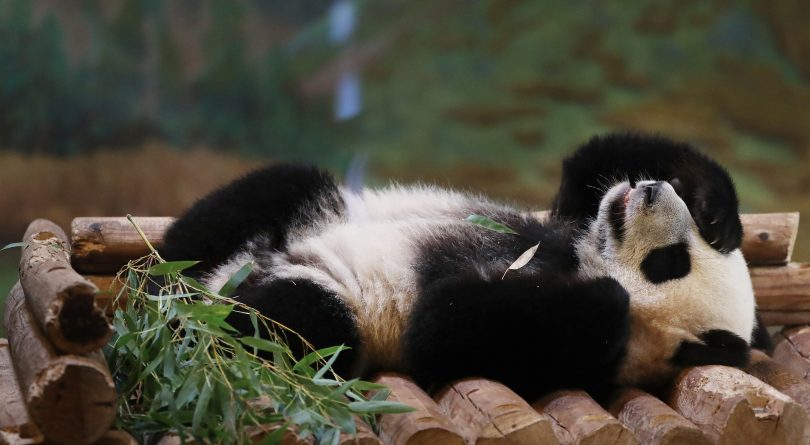 An itch of the throat, maybe; a tingle in the chest, it might’ve been, but not when the noise came from this bear, Er Shun, a diplomatic investment from China for whom the affliction was documented at 16:00 on Feb. 2, 2017, and investigated by zookeepers who took blood samples, considered listening to her lungs and were prepared to sedate her to examine her gastrointestinal tract.

The panda had a cough.

The next day, her blood work returned normal, and the day after, the record reads, “coughed two times when observed but short (five to 10 seconds) episodes and appear dry.” By the end of the week: “No coughing or abnormality reported today … continue to monitor for any reoccurrence.”

READ MORE: It takes a village: How Canada got its first native-born pandas

In March, the four Chinese pandas moved from Toronto to go on display at the Calgary Zoo. Medical records obtained from the Toronto Zoo via a freedom-of-information request expose their hyper-controlled lives in Ontario. In 2013, two adults arrived on loan from China as a symbol of Canada-China relations dubbed “panda diplomacy,” and since female pandas can only get pregnant one to three days per year, the zoo took extraordinary measures to breed cubs to help conserve the species.

To keep the bears for five years, the zoo paid US$5.25 million to the Giant Panda Conservation Fund, spent $2.8 million on bamboo and had three full-time keepers so attentive as to ensure the bamboo was “tasty,” analyze even their somersaults, and once tend to a bear’s claw with a nail file.

Captivity wasn’t just pampered, though, for human rule was often stressful, and the exhibit an unnatural home. Since Er Shun didn’t mate with her male roommate, Da Mao, keepers “electro-ejaculated” him and another male panda in China and artificially impregnated her with twins. Those twins became high-profile enough to be coddled by Prime Minister Justin Trudeau, but behind the photoshoot they occasionally found trouble—a cub once fell from a platform and hit concrete, and another time hung by his head for a moment through bars.

The zoo says there was not one instance of human error during the five years, and that the keepers are just as vigilant with other species. Keepers were empathetic parents, but the 298 pages of medical records also show the human capital and cross-species stress involved when animals lose their agency.

“Very quickly unconscious (five minutes) to a moderate level of anaesthesia, perfect for moving and electro-ejaculation,” reads a record of Da Mao in 2015. He was sedated by hand syringe for a procedure in which a staff member from the Chengdu Panda Breeding Centre collected semen with an electrical device, producing “a good sample.” Afterwards, Da Mao retched foamy fluid, and the next day, his record reads, “continues to be very stressed after latest sedation. Wandering aimlessly and is not eating most of the day.”

RELATED: The pandas are going to the Calgary Zoo. How safe will they be?

During the same season, Er Shun underwent artiﬁcial insemination, beginning with sedation. “A tired and agitated animal. Refused to sit still for hand injection,” reads her record. Instead, she was injected with three solutions, which sedated her—“all at once by a blowdart” —going deep enough to hit her bone. “Dart remained in leg and discharged, however, the tip was bent by the long bone.”

The zoo says these instances should not cause concern. “It’s not easy to dart a moving animal, but again, she was fine,” says Maria Franke, curator of mammals. Franke also says Da Mao’s stress after sedation was normal. “I’ve had surgeries myself, and I know that the next day after being anaesthetized, I’m a bit out of sorts.”

Er Shun couldn’t get pregnant until the zoo used different semen from a panda in China, and she gave birth in October 2015 to cubs 15 minutes apart. Eight days after the keepers cut the umbilical cord, the record notes an early milestone: “Cubs are developing black pigment on their little bodies.” After their time in an incubator, the bears graduated to play mats designed for human children, and one cub started chewing the mats used for bedding in their crib.

“Cub #1 has three teeth!” a keeper wrote when the bears were three months old. The male and female cubs weren’t given names for five months, when they became Jia Panpan and Jia Yueyue, Mandarin for Canadian Hope and Canadian Joy. The keepers then trained the siblings to give blood, as the zoo helped create a “bigger, better giant panda blood database,” Franke says, which researchers around the world can use to understand and conserve the species.

At age two, Jia Panpan could sit on a crate and put his arm in a sleeve used when drawing blood, but his sister, a keeper wrote, “tolerates the needle poke very well with no reaction. Fairly certain of the location of the vessel, but I did not want to poke her too many times with her moving so much.” 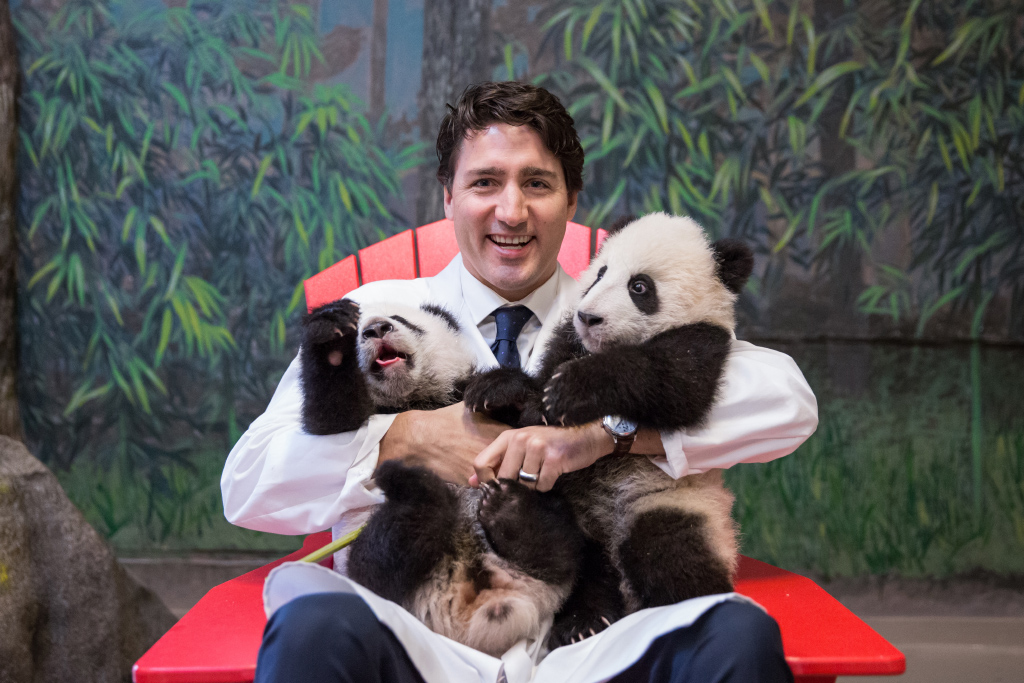 While keepers were gentle, Panpan could’ve hurt himself. “Had his head stuck between bars hanging by head for a minute according to keeper,” reads a record from summer 2017. “When examined, mentation appeared normal and palpation of head and neck (as much as was possible between bars) revealed no abnormalities or reaction. Eating normally. No treatment required.”

Jia Panpan was once accidentally pushed off a platform by his mother. “He mostly landed on the hay but his left side struck the concrete floor,” the record reads. “He was observed favouring his left front arm and was limping a bit. But played with his sister within three minutes. Okay when checked by keepers—no obvious lump.”

Both cubs got roughed up by their mother when she was on edge. “Extremely stressed this a.m.,” reads a record of Er Shun from April 2016. “Did not eat much of her breakfast, then went inside. She was roughly grabbing the cubs and continuously dragging them around and batting them around, too.”

The zoo says the cubs’ misadventures were normal. When Panpan put his head through the bars, “maybe the cub was goofing around,” Franke says. “He obviously was doing something weird.” She also says the cubs were constantly falling—from platforms or otherwise. “Pandas love to fall.”

Franke says the pandas also loved Canadian winters, though the records from Da Mao’s first full winter read, “Blood reported in his pen yesterday from his paws. Likely because he’s been out on the snow and ice which he doesn’t like.” Franke, meanwhile, says, “He actually loved the snow and the ice,” noting that the zoo published YouTube videos of his activity. “He would toboggan. He would skip around. He would jump on snowmen.”

The pandas were picky eaters. “Unfortunately this week’s deliveries of bamboo have been unpalatable to both pandas, and Er Shun was somersaulting when keepers arrived at 7 a.m.,” reads a record from spring 2016. Keepers deduced she was unsettled by the bamboo, which came from Memphis, and in the case of Da Mao, “the keepers feel the bamboo isn’t very palatable for him more often than it is tasty.” Fortunately, the zoo soon received bamboo from Cincinnati—“a preferred food item.”

Franke says keepers didn’t pamper the pandas more than they did other zoo residents, even in the case of Er Shun’s cough. “It’s no different than any of our other animals, if our gorilla gets a cough or something,” Franke says.

In December 2015, the cubs, too, were under similar surveillance for mucus coming from their noses. Keepers observed “a slight, intermittent, bilateral, clear nasal discharge,” which was sent for lab testing. The results brought no dire diagnosis, but the staff—except for one keeper who feared contaminating the bears due to her recent contact with a snow leopard—continued to monitor the condition. The cubs had a sniffle.