Police are 'confident' they have their guy. But an army of social-media Sherlocks aren't so sure.

Toronto Police weren’t bluffing Wednesday morning when they asked the alleged Blue Jays beer thrower from Tuesday night’s playoff game—the one who very nearly hit Kim—to come forward, saying: “We have photos.” By evening, no one had answered their call and so at 6:11 p.m. on Oct. 5, they asked the Twitterverse for a little help.

Pretty soon the most wanted man in Toronto, Ken Pagan, turned himself in. He said he was the person in their photo, yes, but in a brief comment to Postmedia—which happens to be his employer—he suggested police have the wrong man.

“I was drinking out of a cup,” he said. “I’d love to tell you what happened and my story… but I can’t say anything.”

Enter the Internet sleuths, “Ken Pagan truthers” and the angriest Twitter mob in history for a person who could face—according to Toronto Police—“general mischief charges.”

If Pagan indeed chucked a can of beer, what explains the photo of him holding a plastic beer cup moments after the incident took place? Is there a mystery blond woman to blame? Do police have the wrong person? (They have said they are “confident” they got their man.)

The mystery starts with the help of a Canadian Press photographer with a lens on the stands.

.@BlueJays Here is the zone from which the beer can was thrown 4 seconds afterwards. pic.twitter.com/eBb2B0SXd4

Police were on the scene soon afterwards, but the alleged beer thrower had already slipped away by then.

The beer can thrower had left his seat by time police got there. TPS 52 Division Detective Sgt now on the case. https://t.co/IXUHVgjWnT

Soon evidence surfaced, namely this video—zoomed in and blurry—where the narrator suggests it’s a blond woman in the section who throws the beer like NBA’s legend Kareem Abdul-Jabbar’s hook shot.

There’s other evidence to suggest Pagan’s innocence. For starters, his Twitter page (before he deleted it) had him calling the Blue Jays wild-card celebration—where the team was pouring beer on the heads of anyone and everyone in sight—a waste of beer.

And indeed, moments after the incident, Pagan has a plastic cup of beer in his hands.

The chronology by the second. pic.twitter.com/Tz07ekFKhF

Also, what explains the disappearance of this Jays fan highlighted in purple? 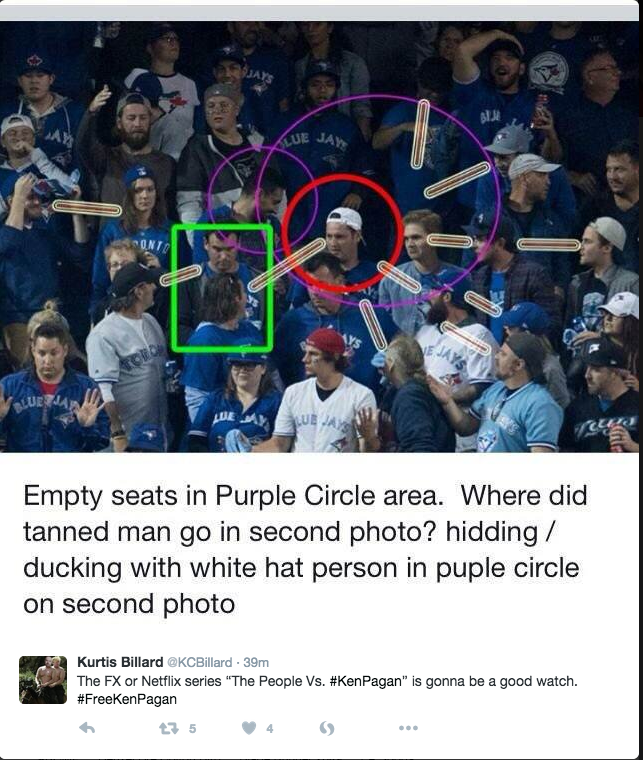 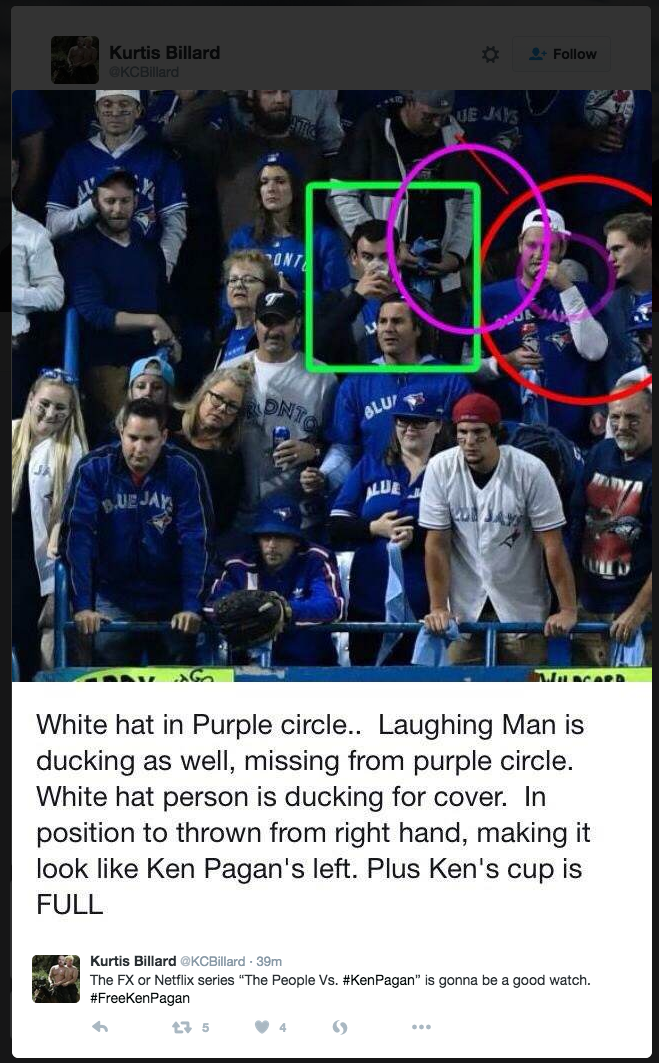 So does all this evidence lead the Internet jury to some reasonable doubt? Well, there’s more video.

From this footage of the incident in slow motion—a much clearer shot— it appeared as though someone (who the video points out is Pagan) chucked the can as if the beer were a Frisbee.

Why would Pagan have both a can of beer and a plastic cup of beer? The beer throw took place in the bottom of the 7th inning, and the Rogers Centre stops selling beer after the 7th inning stretch—just before this beer can came raining down. Most loyal beer-drinking Jays fans know that if they want some fresh suds in the final innings (or extra innings) of the game, it’s important to load up during the bottom of the 7th. Which means the beer thrower may have had a plastic cup from a recent purchase, and the beer can from a previous buy. (Or vice versa.) Though one can’t draw conclusions from this information alone.

COUNTERPOINT: Why we, and police, should slow our roll

And what about the gap of empty seats behind Pagan right after the incident? Did someone throw the beer and hustle out quickly? Were they merely ducking to avoid the likely cameras focused on their section? One person, who claims to know someone who was watching in that section at the game, suggests otherwise.

@frankgunnphoto So a friend knows the woman in the jean jacket. In the gap/void was a woman and her child (thus why they were sitting down)

Pagan has reportedly obtained legal counsel, which means this story could drag on for a while. So unless someone fesses up, witnesses come forward or even better video evidence surfaces (4K anyone?), the Jays beer-throwing incident will be remain a whodunit mystery for new age social media Columbos.

If the #beerthrower isn’t Ken Pagan, Toronto police will have a lot explaining to do..