Is there hope for the pets of Fort McMurray?

There are already plans to rescue pets that Fort McMurray evacuees had to leave behind, but experts say animals are also miraculously fire-smart 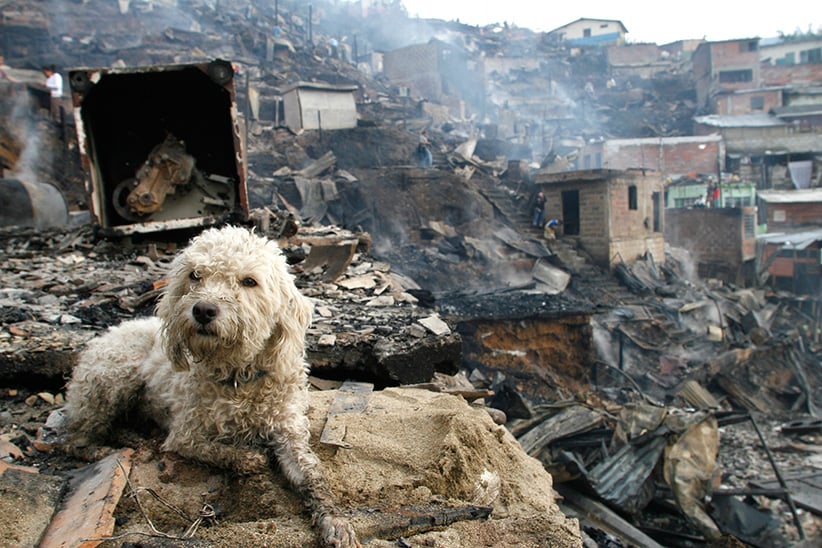 A dog sits near the remains of a house after a fire in Comuna 13 in Medellin, Colombia. (Fredy Amariles/Reuters)

In the middle of the night five years ago, Scott Bradd fled a fire in his house and had to leave his 200-lb. mastiff, Daisy, behind. “I was calling her,” he says. “I took two steps back in, but it was an inferno.” Eleven hours later, while watching a bulldozer demolish the remains of the house, a dazed, drenched creature emerged from the ground. Bradd thought it was a ghost. Upon double-take, he cried “Daisy!” and jumped over the barricade, yelling at the demolishers to stop. “She crawled out of the rubble,” he says, “black as can be.”

Mastiff or otherwise, pets fare better in fires than would be expected. In Fort McMurray, many pet owners evacuated with their animals in tow, and horse owners even rode their steeds to safety. Firefighters say such dutifulness is typical. “We’ll go in [to a building] for a fire alarm, and there’ll be a massive exodus,” says Randy Bedford, a recently retired firefighter of 32 years in Toronto. “People are carrying their bunnies, their hamster cages, all in their arms. If they have lizards or snakes, I’m sure they’re coming down, too. We’re trying to get up the stairs; they’re coming down with a zoo.”

Pet owners in Fort McMurray who weren’t able to take their animals with them when they evacuated are pleading for help on social media, but they have good reason to hold onto hope. Not only has the Edmonton Humane Society set up a disaster relief fund for animals and announced itself “ready to perform rescue operations,” but animals also seem to be miraculously fire-aware. “You have to understand that pets are very smart,” says Alex Pavcek, deputy chief of the Lesser Slave Lake Fire Department. “It’s been proven that they manage to get out and find a home.”

Cats, especially, tend to hide in closets or closed-in spaces, which can save them from flames. They stay low to the ground, where there is the most oxygen. “I’d say 75 per cent of them survive when we didn’t think they would,” says Bedford. During a secondary search after one fire, Bedford found a cat in a closet; paramedics gave it oxygen, and it survived. “A person would have perished in that situation,” he says. “Cats are resilient. The ‘nine lives’ is pretty much true.”

Meanwhile, dogs are a man’s best fire alarm, as they often wake up their owners because they smell smoke first. Dogs then commonly follow or lead their owners out of the house. In the 1800s, Dalmatians even aided fire departments by guiding horse-drawn carriages to the scene of the flames. “I’ve only had one fire where we had dogs dead,” says Bedford.

For pets left in burning structures, firefighters know how to help. Some fire departments now carry oxygen masks designed for animals, and others encourage people to put stickers on their doors notifying fire personnel that animals live in the house. When Bedford found a pitbull and her three puppies in a fire, he found himself following his teammate in doing mouth-to-snout CPR. “We’ve rescued birds, rats, cats,” he says. “If we see an animal, we generally grab it and take it out.” He once pulled three cats out of a burning building and nested them temporarily in the fire truck. Another time, he returned into a basement of a house to rescue a colony of beloved rats. “Once, a guy walked out of his house with a parrot cage,” adds Bedford. “He didn’t realize he lost the bird in the driveway, so we went and scooped it up for him.” The SPCA presented an award to one of Bedford’s teammates after he carried a guinea pig down a ladder.

Of course, firefighters don’t prioritize animals over humans. “I can’t risk the life of two firemen for a dog in an unknown place,” says Pavcek. “We have to assume the cat is going to do the best it can to get out. It’s risk over reward. Every firefighter will tell you the same thing. They’re going to do their best to save every living thing.” Bedford agrees. “They’re down the list on priorities,” he says. “Often it’s pitch-black. You could be stepping over a dog, be right beside a dog, a cat, and you wouldn’t know it. If there’s a child in there, we’re diligent. We get down on hands and knees and search.”

Related: How big is the fire in Fort McMurray?

For the pets left behind, animal lovers themselves have a culture of mobilizing. Volunteers as far away as Saskatchewan are offering help for Fort McMurray, including volunteers at an animal welfare organization called the Pack Project. “They’re asking, ‘should I drive up to Fort McMurray and take a bunch of dog food?’ ” says Amy Vitkay, director of the Pack Project. When wildfires struck northern Saskatchewan last summer, Vitkay’s team delivered 50,000 lb. of kibble, along with doggie beds, collars and toys, to fire-affected communities in which many dogs were wild and packing together out of hunger. “Every province should have an evacuation plan for animals,” she says. “We’re expecting a really volatile fire season.” When pets do die in fires, a network of support groups have formed for grieving pet owners.

As for Bradd, he had to put Daisy down last summer due to hip issues, although she lived to age nine. After the fire, she had a fear of flames, especially when camping. “Prior to that, she would snuggle up to the fire and get all warm,” says Bradd. Yet, her burns healed, including one the size of a hockey puck between her shoulder blades. “The fur came back in, and you couldn’t even see it,” says Bradd. He is still astounded that she survived. “I don’t know how or why,” he says. “I guess it was the will to live.”