It was safe to land plane that crashed in Halifax: Air Canada

Despite snowfall warning in Halifax, Air Canada says that 'the weather was appropriate for landing' plane that crashed 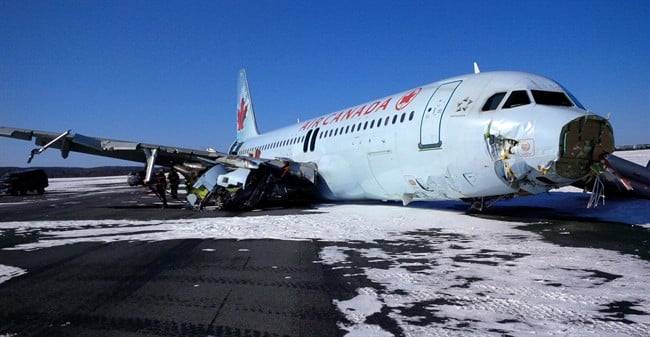 An Air Canada plane is shown after skidding off a runway as it landed early Sunday, March 29, 2015 in a snowstorm in Halifax, an airport official said, sending 23 people to hospital. (Transportation Safety Board Canada/CP)

HALIFAX – It was safe to land an Air Canada plane that crashed at the Halifax airport in the midst of a snowstorm, the company said Sunday.

“It was safe to fly in this weather. The aircraft did circle for a period of time but when the approach was initiated, the weather was at the approach minimums,” Goersch told a news conference.

“The weather was appropriate for landing.”

The plane left Toronto just before 9 p.m. Saturday carrying 133 passengers and five crew members. It landed hard and skidded off a runway Sunday at 12:43 a.m. AT, Air Canada said.

The Halifax area was under a snowfall warning at the time and Goersch said wind speeds were 30 knots, or about 55 kilometres per hour.

Airport spokesman Peter Spurway said the plane was flying from the south in a northerly direction when it landed on the airport’s main runway, adding that it is up to pilots to decide whether it is safe to land in bad weather based on information relayed from ground crews to the tower.

Goersch said 25 people were taken to hospital and all but one of them were released.

“All of us at Air Canada are greatly relieved that there have been no critical injuries as a result of this incident,” he said.

“It obviously has been very unsettling for our customers and their families and we have been working very hard with them to take care of them and see after their needs.”

Randy Hall and his wife Lianne Clark were on their way home from a Mexican vacation when they said the plane ran in to trouble.

“We just thought that we were landing hard. And when the … air bags started to deploy and you saw things falling on the floor, we said, ‘Oh no. We’ve got to get out,’ ” said Clark, a computer consultant.

“We just opened the doors when we landed and everyone started to pile out.”

Hall said he believes the jet hit a power line before it landed hard on the runway. There were sparks but no fire, he said.

“There was a big flash,” said Hall, who is retired and lives in Mount Uniake, N.S. “The plane came down, bang! It jumped up in the air again.”

The aircraft skidded for a long time before coming to a stop, said Hall, adding that it hit so hard, the landing gear and at least one of the engines was ripped from it.

The Transportation Safety Board released photographs of the wreckage but it cannot be determined whether the engines are still attached to the plane. A photo of the front of the plane released on the board’s Twitter account shows what appears to be the engine on the starboard side of the plane crumpled under the wing, while the view of the port side wing is obscured by an emergency slide.

Hall said passengers left the plane immediately but they were left standing on the tarmac, some in their stocking feet, as they were lashed by wind-whipped snow before buses arrived.

There were reports passengers had to wait on the runway up to 50 minutes to be shuttled from the scene.

Spurway said the airport is reviewing its response.

“We feel badly that they were out there as long as they were,” he said.

Dominic Stettler, 31, of Wolfville, N.S., said people on board the plane responded with level heads.

“I think we hit a power cable, there was a lot of sparks,” he said. “We hit the ground, we came up and then we slid on the runway for quite a long time. We just kicked the doors out and jumped onto the wing and then ran because we just wanted to get away from the airplane in case of explosions or anything.”

The flight crew told the passengers that conditions at the airport weren’t good and they would circle for an hour to see if things improved, he said. If they didn’t, Stettler said the flight was going to head to Moncton, N.B.

“And then there was a window of visibility and we went for it,” said Stettler, the father of two boys and a girl.

“I actually didn’t know we (were) on the runway. I thought we might be on a field and that at any point we could run into a tree or some obstacle. While we were sliding, I just thought about my boys and my family.”

Once he was off the plane, he ran from the aircraft.

“I tripped over a big metal object, which must have been one of the components,” Stettler recalled. “It was just completely surreal. Parts of the plane were scattered across. I don’t really want to say too much because I don’t want to terrify people.”

The power went off at the airport, which meant an emergency response centre had to be moved to a nearby hotel, Spurway said. Nova Scotia Power later tweeted that power was restored, but it didn’t indicate why it went out.

The RCMP said a power line south of the runway outside airport property was damaged.

Goersch said Air Canada has spoken with the pilots, who suffered minor injuries, but they have not been able to say what happened. He said the company will work with the Transportation Safety Board to help determine what caused the crash.

The pilots have been with Air Canada for about 15 years and they haven’t been involved in any other crashes, Goersch added.

— With files from Michael MacDonald, Gregory Strong and Michael Tutton

Note to readers: This is a corrected story. A previous version said the plane was flying in a southerly direction at the time of the crash.