It's time we stopped paying for your river view

Flooding is predictable and increasingly common, and the government needs to halt its huge bailouts of oblivious homeowners 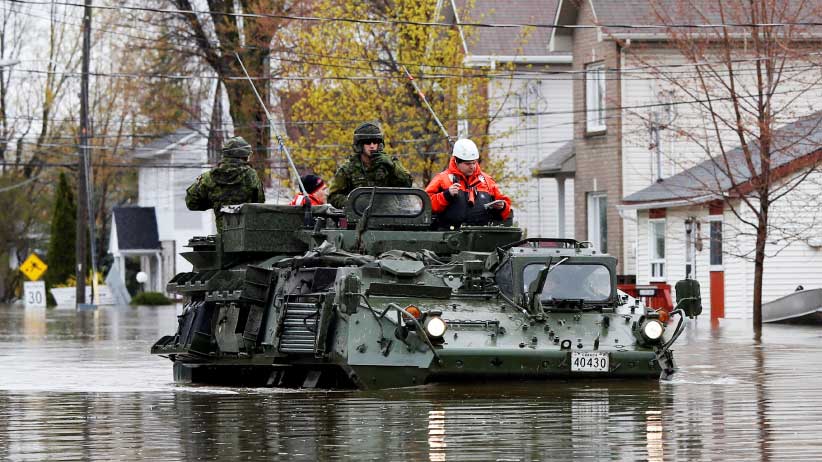 Imagine you are house hunting, and you find one that meets your needs perfectly. It’s beautiful. It’s affordable. There are even good schools nearby. But there is only one problem: directly above the house, perched on a cliff, is a giant teetering boulder. The realtor tells you not to worry; it will only fall once, sometime in the next 100 years. Who in their right mind would take those odds? Apparently, millions of you.

According to the Insurance Bureau of Canada, there are 1.8 million households in this situation, homes built on floodplains or in other areas where they are at “very high risk” of flood damage. In British Columbia, Ontario, Quebec and New Brunswick thousands of homeowners are discovering this is not a theoretical risk, as a “one in a hundred year” floods submerged entire neighbourhoods this week.

If you’re like me, your first instinct is sympathetic. It must be heartbreaking to have your home ruined, filled with refuse and sewage, furniture and mementoes wrecked. My sympathy begins to dissipate almost instantly, however, when I begin to read about how the federal government is going to cover the cost of sending in the military, and how the homeowners are anxious to move back in and rebuild.

Here’s the problem. The huge river running next to their property was not a secret when they bought it. The instinctive Canadian response, of course, is to blame someone else, usually the government. “No one warned them it could flood.” Well, let’s clear that point up for everyone: rivers rise. If you have a house in a low-lying area, eventually it is going to flood. If you genuinely didn’t understand that before, consider yourself informed.

COUNTERPOINT: Floodplain living isn’t a luxury. It’s a reality we have to deal with.

But, perhaps there is a reason to blame government, at least at the municipal level. City councils across this country have been zoning flood plains as residential for decades now. And why wouldn’t they? Riverside lots are beautiful and they generate more tax dollars. When that once-in-a-century flood comes along, it’s typically the province and the federal government who chip in to pay the costs. Or, more accurately, it’s taxpayers from across the country who foot the bill.

That is what is happening right now. Again. Federal and provincial politicians are promising assistance, of all kinds, to our fellow citizens who were unaware of the giant river next door. The Prime Minister, our empathizer-in-chief, warmed our cockles by assuring everyone, “When Canadians are facing natural disasters or serious issues, we pull together. That’s who we are.”

And this is true. One of the social compacts in this country is that when there is a natural disaster, we spread the risk amongst all of us. This time-honoured contract was based on the idea that a) disaster strikes rarely enough that the costs are sustainable, and b) they can’t be predicted. Neither of those assumptions are still valid.

A new study from the Munk School’s Institute on Municipal Finance and Governance at the University of Toronto reports that in recent years the federal government’s spending to reimburse provinces for a portion of their disaster relief and recovery costs more than doubled to $280 million a year and will likely triple again. Across the country, the last two decades have seen a dramatic increase in urban flood damage. Backed up sewers and extreme rainfall accounted for $20 billion alone in costs. The 2013 flood in Calgary cost $5 billion, making it the single most costly natural disaster in Canadian history. The reason is simple. Climate change is creating more extreme weather events, leading to more flooding, which is costing more and more money. And scientists predict it is only going to get worse.

And when it does, it should not be a surprise for anyone. There was extensive nation-wide flood plain mapping several decades ago, which unfortunately was not widely distributed and is hard to come by. But with modern satellite imaging and online mapping services, any homeowner or municipal official can determine if an area is at risk of flooding in a matter of minutes. There is almost no excuse for cities to not be taking preventatives measures, and for buyers to claim they had no idea there was a huge river next door.

Nonetheless, after the floodwaters recede this week all of those homeowners will most likely move back in. Cities will continue to develop more flood-prone lots. And federal and provincial taxpayers will continue to honour our archaic social contract and foot the bill.

Unless we make a few changes. First, let’s begin to cut or even phase out the federal government’s provincial disaster assistance funding for floods. Cities will never spend the money to build flood barriers if someone else is always going to bail them out. Provinces should also require municipalities to carry mandatory flood insurance. City councils in turn should require homeowners to do the same. If you want to drive a car, you need car insurance. If you want to own a house, you should need flood insurance. And, if you discover your insurance company is going to charge you tens of thousands of extra dollars for that river view bungalow, you may pause before buying it. Finally, realtors should be forced to disclose previous flood damage and future flood risk, and be held liable if they do not.

It’s a new world. Our old social compacts need to be adjusted. If flooding is going to continue to get worse, and if homeowners and cities are aware of this in advance, there is no reason the rest of should continue to “pull together” and pick up your bill. You are free to pretend that teetering boulder isn’t going to eventually crash down on your house, but the rest of us won’t.

Scott Gilmore is a member of the Conservative Party, and married to a Liberal Cabinet member