The 62-page, French-language book is a collection of 14 salvaged blog posts published between 2010 and 2012 that weren't destroyed by authorities 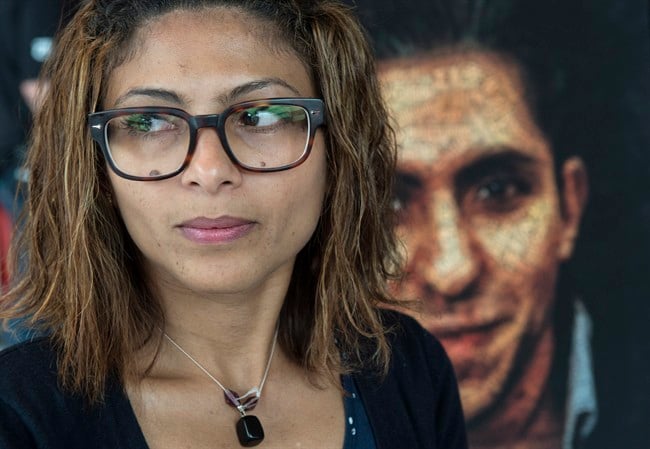 MONTREAL – The wife of jailed Saudi blogger Raif Badawi says he has not lost his wit or desire to express himself through prose, even as he languishes in prison in poor health and struggles with low morale.

During one of Ensaf Haidar’s twice-weekly phone calls with her husband, Badawi dictated an essay that became the preface to his new book, released in Quebec on Tuesday.

The 62-page, French-language book is a collection of 14 salvaged blog posts published between 2010 and 2012 that weren’t destroyed by authorities.

Those posts resulted in Badawi being sentenced to ten years in prison and 1,000 lashes for insulting the country’s clerics.

Related: Our Q&A with Ensaf Haidar about her husband’s imprisonment

Badawi’s detention and sentence have stirred up worldwide condemnation and Quebec’s immigration minister recently announced the province would accelerate immigration procedures for him.

While he is not a Canadian citizen, Haidar and his children fled Saudi Arabia in 2012 and settled in Sherbrooke, Que., in 2013.

Badawi writes of the terrifying, excrement-laced bathroom he shares with other inmates in prison and its dirty, rusty walls covered in hundreds of graffiti markings.

“My eyes fall on the phrase: “Secularism is the solution,” he writes. “Stupefied, I rub my eyes to make sure I am reading correctly.”

He continues discussing how in his new life in prison, the bathroom “plays a large role in the formulation of men’s thoughts. As soon as I sit on the toilet bowl, ideas start to jostle around in my head.”

Haidar took the microphone Monday and addressed those attending the launch in French — which she’s is learning — thanking Amnesty International, the human rights organization who has been working to raise awareness about her husband’s plight.

Badawi’s texts are simple, witty and sarcastic: they discuss how Saudi citizens can no longer “play the ostrich,” ignoring how the country refuses to respect religious minorities.

His writing explores gender equality and how religious dogmatic can stifle innovation and creativity.

He discusses how citizens have the right to “believe and to reflect, to love or to hate, to be liberal or Islamist.”

However, after a first session of 50 lashes in January, all others were postponed, apparently due to health concerns and undisclosed reasons.

Amnesty International and Haidar fear his punishment will resume in the near future.

“His health is not good and his morale is not good, but that’s normal, he’s been in prison for three years already,” she said.

Haidar added it’s difficult for her young children to grasp their jailed father is on the other end of the line.

“They need to play with him and touch him. Talk to him. To laugh and smile with him,” she said.

The book, published in Quebec by Montreal-based Edito, was also released earlier this year in Germany.

Profits will be split between the publisher and Badawi’s family.