Japan-Canada trade talks stalled, with no meetings in sight

Trade talks with Japan are a priority for the Harper government, but the Asian country has reportedly lost interest 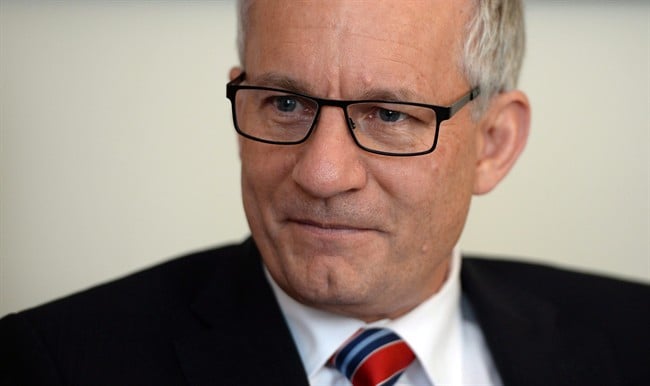 International Trade Minister Ed Fast takes part in a interview in his office in East Block of Parliament Hill in Ottawa on Thursday, February 5, 2015. (Sean Kilpatrick/CP)

OTTAWA – Trade talks have stalled between Canada and Japan — one of the Harper government’s priority countries for a breakthrough — because the Asian country has lost interest, The Canadian Press has learned.

An internal memo from the Department of Foreign Affairs, Trade and Development says the level of progress with Japan has failed to meet expectations since talks opened in March 2012.

The memo says Japan is more interested in the ongoing 12-country Trans-Pacific Partnership talks with several of its neighbours as well as Canada, the United States, Mexico and Australia.

Japan is dragging its heels on a date for the eighth round of bilateral trade talks with Canada, says the note, which was prepared for an April 17 meeting of department officials.

Trade Minister Ed Fast told the House of Commons trade committee two weeks ago that Japan and Canada were still trying set a date for the next round.

In March 2014, Prime Minister Stephen Harper announced a free-trade deal with South Korea, touting it as a breakthrough in Asia and saying that Japan was one of the main targets for the next big trade agreement.

The government has said that a joint study shows a free-trade deal with Japan would boost Canada’s economy by $3.8 billion a year.

While some analysts have been upbeat about the possibilities of a Japan-Canada breakthrough, the internal memo tells a different story.

It says Japan’s “overwhelming focus” on the Trans-Pacific deal overshadows the talks with Canada.

“While some progress has been made in the CJEPA negotiations with seven rounds to date, overall, the CJEPA text remains less developed than expected after three years of negotiations.”

The memo says Japan turned down two proposals by Canada to host an eighth round of talks in early 2015 and would prefer to see that happen after the next Trans-Pacific ministerial meeting.

“Chief negotiators met in Tokyo April 9-10 to discuss a way forward, but Japan remains unwilling to agree to a date for the next round without more clarity on the TPP timeline and outcomes.”

Liberal MP Geoff Regan tried to pin Fast down on a date for the resumption of the talks during the minister’s committee appearance.

“We’re just in the process of trying to nail down exactly where that round will take place,” Fast said after Regan pressed him.

Harper has positioned his government as ardent free traders and has made the deepening of trade and investment in Asia a key economic priority.

He will likely cross paths with Japanese Prime Minister Shinzo Abe at the G7 summit in Germany next month.

The Conservatives see Asia as a fertile market for Canadian energy products, especially since Keystone XL pipeline project, which would carry Alberta bitumen across the United States to Gulf coast refineries, has been stalled.

In addition to finding new customers for energy products, the government has been trying to increase trade with big players like China and India, as well as trying to break into regional groups such as the 10-country Association of Southeast Asian Nations, or ASEAN, which includes the Philippines, Vietnam and resource-rich Myanmar.

Last year’s pact with South Korea hardly happened overnight. It took more than decade of on-again, off-again negotiation. It is expected to increase Canadian exports by 32 per cent and pump $1.7 billion into the Canadian economy.