Jason Kenney and the oil sands: look who's statist now

He may be a true believer in the conservative cause, but Kenney has evolved into a petro-premier first and foremost 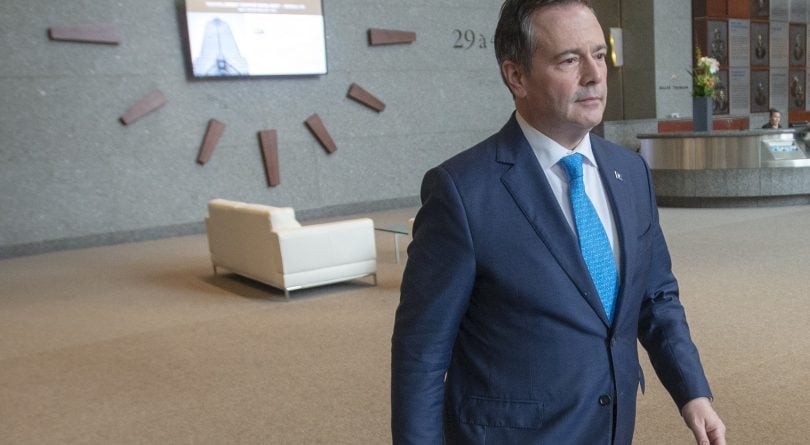 Jason Kenney delivered some classic jasonkenneyan lines about government intervention in private industry when he spoke on Tuesday to an Edmonton small business group. And by classic, I mean hearkening back to sometime last week before Alberta’s premier, a former Canadian Taxpayers Federation head, had discovered keenness to deposit his government’s funds directly into the oil industry.

There are two paths on economic diversification, Kenney explained from the lectern. His preferred path is to give all businesses the benefit of tax breaks and less regulation. The other, he said, “is for politicians and bureaucrats to pretend that they are know-it-alls, to take your tax dollars and then to wager them through privileges to select, hand-picked winners and losers. And sadly, the economic landscape of Alberta has a lot of tombstones of businesses that were massively subsidized and failed. That is not a sustainable path to diversification.”

This is Kenney’s conservative boilerplate; an echo of former premier Ralph Klein’s approach in the 1990s. After those NDP lefties in Rachel Notley’s government spent billions to ship landlocked crude by rail, Kenney raced to return those trains to the private sector, where he felt they belonged. But Kenney’s staff must have written that part of the speech before Sunday, when Teck Resources withdrew its proposal for the Frontier oil sands mine megaproject, rather than risk the federal cabinet making it a martyr in the climate change battle.

RELATED: On the Teck Frontier mine: stumbling in the shifting sands

Since then, Kenney’s approach has taken a turn—if not toward diversifying beyond oil and gas, then certainly to clinging to the shirttails of Alberta’s bonanza-bringing sector. Faced with Ottawa’s apparent indifference toward an endless horizon of oil sands growth, and with the global investment community’s wariness of that costly and jumbo carbon-footprinted region, Kenney wants his government to—you guessed it—pick winners and losers.

Later in that same Edmonton business speech, he spoke of his United Conservative government’s newly fluttering eyelids toward direct investment or participant in the oil sands. “We will not surrender. We will not be passive. We will do what is necessary,” Kenney said. No mention of winners and losers in this passage.

He elaborated on this on Tuesday in an earlier press conference. He pointed to what another ex-premier, Peter Lougheed, did in the 1970s. At the height of the OPEC oil crisis, when prices were perilously high (quite unlike today), Lougheed created Alberta Energy Company to help develop natural gas and Syncrude, the second big oil sands mine. Major investors were wary of the then-fledgling “tar sands,” leaving it to governments (including those famously Alberta-hating jerks in Ottawa) to give it a leg up.

“At a time we could not get adequate access to capital to develop the third-largest oil reserves on earth, the government of Alberta played a critical role until that was no longer necessary,” the current premier said. “Well, it may be necessary again.” Kenney also said to stay tuned for Alberta “looking at a financial role for an essential major project.”

Today, as nearly a half-century ago, funds and investors are shy about sinking large money into the oil sands muck when cheaper developments are available elsewhere in the world. The difference for this generation: big money has given Alberta a go and decided to retreat. Viewed once as a winner, oil sands are now widely viewed as an investment loser. Analysts ascribed “zero value” to the Frontier mine because of how unlikely it was to ever proceed, the Globe and Mail’s Niall McGee noted this week. Climate change adds a whole new dimension of risks that never existed back when Canadians could smoke in hospital waiting rooms.

Some fresh nationalization of the resources sector would, of course, follow the Trudeau government’s purchase of the Trans Mountain expansion. That project has been widely viewed as economically viable, even at its new $12.6-billion price tag, because there’s pent-up demand for pipeline capacity for existing bitumen development. While the premier hasn’t hinted at what fledgling oil projects his province could get equity stakes in—he floated the idea of backstopping Alberta First Nations investment into the Teck mine, but that was when it was alive—he could be gambling on far riskier, long-term ventures than Trans Mountain, which is saying a lot, given the risk-laden past of that project.

As much of a true believer Kenney is in the conservative cause, both its social and fiscal branches, he’s evolved into a petro-premier first and foremost. If that means getting Albertans to rally around the concept of investing in the source of their prosperity when nobody else wants to, so be it. Hey, it worked for Lougheed (during a prolonged oil price boom), didn’t it?

RELATED: The real betrayal of Albertans? Lifer politicians who won’t tell them the truth.

On the same day Kenney embraced the heavy hand of government intervention, he also waved a more conservative-friendly heavy hand: the “law and order” variety. His government tabled legislation as a provocative response to railway blockades in solidarity with the Wet’suwet’en hereditary chiefs’ pipeline protests: fines ranging from $1,000 to $25,000 for interrupting, damaging or even trespassing on “essential infrastructure” like railways, highways, pipelines and oil projects. It takes inspiration from similar laws in Texas, Louisiana and South Dakota that were intended to prevent protests like the 2016 Standing Rock anti-pipeline movement.

In overwhelmingly pro-development Alberta, there’s much lower risk of such activism than elsewhere, but Kenney’s hoping to provide a model for other Conservative leaders. Federal Tory leadership contender Erin O’Toole has already proposed something similar on a national scale.

On a single day, Jason Kenney showed willingness to be ultra-conservative with legal punishments and generously socialistic with public investment into the private sector. In the service of a besieged oil sector, this premier wants to be flexible.