If his go-it-alone message sounds familiar, it’s because he borrowed it from Quebec 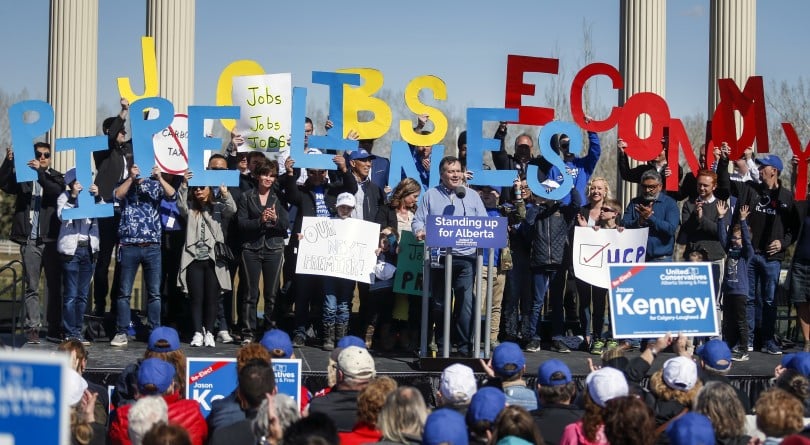 More than two decades before Jason Kenney ran to become Alberta’s premier, he entered electoral politics as a Calgary MP for the Reform Party. The Reformers’ rallying cry was “The West wants in”—a demand for sway in a Confederation long dominated by populous Ontario and temperamental, demanding Quebec. But a subset of their number actually preferred the West wresting its way out, especially from areas under Ottawa’s control.

That subset would ﬁnd its manifesto in the 2001 “ﬁrewall letter” by six conservative Calgary thinkers, including a younger Stephen Harper. It urged Alberta to, among other things, wield its constitutional powers to their utmost by starting its own police force and pension plan, while unyoking provincial health care from the strictures of the Canada Health Act. Kenney, like most politicians at the time, kept a respectful distance from the ﬁrewall agenda—as did Harper once he became leader of a federal united Conservative Party, and later prime minister, whereupon he brought Kenney into cabinet.

Today, Kenney sits atop provincial politics while Albertans seethe over a ceaseless onslaught of bad news and frustration: a prolonged economic slump, stalled pipeline projects, outsiders seeking to stymie the oil industry and—most of all—Justin Trudeau, the most passionately despised leader here since Trudeau’s father brought forth the hated National Energy Program (NEP). Though not in name, the ﬁrewall’s “back off” mindset is back, this time championed by someone on the verge of becoming premier.

At the same time as he nurses Alberta’s traditional grudge against Quebec, Kenney has signalled that, as premier, he’d draw inspiration from Quebec’s political obstinacy. “I think we can learn a few things from our Quebec friends, how they’ve been so effective, dominating the politics of the federation over several decades,” he told a United Conservative Party (UCP) rally in March, a few days into the campaign. “You know, I respect them. They fought for themselves. And it’s time that we had leadership that fought for Alberta.” The Calgary hotel crowd gave some of the evening’s greatest roars of approval.

Alberta offers fertile ground for an us-versus-them leader. The failure of Ottawa to build a coastal oil pipeline has dragged the province down in economy and spirit, while the Trudeau government’s purchase of the Trans Mountain project has been eclipsed by the PM’s perceived lack of empathy for oilpatch job losses (an impression fed by revelations that Trudeau was unapologetically leaning into challenges faced by Quebec-based SNC-Lavalin). Add to that pipeline opposition from Quebec and British Columbia, and relentless obstacles erected by environmentalists and some First Nations groups. The result, says Martha Hall Findlay, head of the Canada West Foundation, is a regional malaise much different from the 1980s’ beam of rage at Pierre Trudeau and his NEP. “There’s a great frustration that I think is less focused, and I would argue maybe more dangerous because it speaks to the lack of [unity in] Canada.” For four years as premier, the NDP’s Rachel Notley tried co-operating with Trudeau, offering a softer, more constructive approach. With no major pipeline to show for it, many voters are ready to try something else. “It’s time for the gloves to come off,” Hal Kvisle, a retired pipeline and oil executive, tells Maclean’s.

Hall Findlay’s Calgary-based think tank co-sponsored a recent Environics Institute survey that revealed a dramatic darkening of the provincial mood. This winter, 56 per cent of Alberta respondents agreed that “Western Canada gets so few beneﬁts that it may as well go it on its own”—by far the most support for that statement in more than 30 years. Those results came on the heels of an Angus Reid survey suggesting 50 per cent of Albertans believe the province could separate from Canada. It’s a disconcerting shift that demands federal and provincial attention. In a campaign release, Kenney’s UCP exaggerated it as “a shocking 50 per cent of Albertans surveyed said they support secession from Canada,” and warned that Alberta is “under assault from other governments in Canada.” With that, Kenney released his “fair deal for Alberta” election platform.

While the ﬁrewallers wanted an Alberta-only equivalent of the RCMP, Kenney proposes an Alberta parole board that would be more mindful of rural crime woes than the federal board. He suggests a constitutional challenge to the Liberals’ Bill C-69 for environmental assessments, which he calls the “No More Pipelines Act,” though Alberta oil and pipeline organizations are lobbying to amend it rather than kill it outright. And he promises to mount a swift constitutional challenge to a federal carbon tax, after Saskatchewan and Ontario try the same thing.

RELATED: Are we really okay with Jason Kenney?

Plucking directly from the 2001 ﬁrewall letter, Kenney proposes that Ottawa cease cash transfers for health care and social services and instead transfer tax points to provinces and let them raise revenue themselves. That’s a plan almost no other province would agree to, as it would give Alberta a healthy cash advantage while forcing seven other provinces to pay a greater share for those services. Then there’s equalization, a redistributive measure that would never make Alberta a recipient province, almost any way it’s rejigged. Kenney’s suggested reforms include removing non-renewable resources from the formula and requiring provinces that don’t exploit their resources, like frack-wary Quebec and New Brunswick, be penalized.

His most audacious pledge, though, and a huge hit on his campaign applause-o-meter, is an Alberta referendum to remove equalization from the Constitution altogether. He promises to hold the vote in 2021 if there’s no progress on pipeline construction, and if C-69 passes. “I do not say this lightly,” Kenney told the Calgary rally. “And my goal is not to end support from Alberta for the rest of the country. Our goal is simply to get fairness.” A clear referendum result, he argues, would force Ottawa and the provinces to the constitutional table, and the mere threat of this explosive manoeuvre would give Alberta leverage on the pipeline ﬁle. It’s a nervy, some would say reckless, play—seeking leverage by threatening to gut a key part of the Constitution and Ottawa’s long-standing spending regime under Liberal and Tory rule alike.

What’s more, the hammer force Kenney describes appears to be imaginary. This stratagem has roots in Quebec separatism—one senior Kenney adviser has called it the “economic secession” option. The idea is that the Supreme Court’s 1998 reference on secession gives any province the right to use a “clear majority . . . on a clear question” to force constitutional negotiations. The wording and interpretation come from the writings of Ted Morton, a political scientist, former Alberta ﬁnance minister and one of the authors of the ﬁrewall letter. (The UCP could not point to any legal scholar they relied on for this plank of their platform.) “If the court wanted to limit it to just Quebec, or just secession, they could have, and they didn’t. They used very general language,” Morton says. But let’s remove the ellipsis Morton used in his published writings about the ruling: “a clear majority in Quebec on a clear question in favour of secession would confer democratic legitimacy” (italics ours).

The high court did, in fact, take steps to limit the scope of its ruling to unilateral declarations of independence, says Margot Young, professor at Vancouver’s Allard School of Law; there’s no such obligation upon Canada to negotiate the results of an Alberta referendum on equalization. “It’s fudging the boundaries between what law requires and what is politics.” In the same vein, a Prince Edward Island referendum to, say, obtain more Senate seats wouldn’t force talks, says Eric Adams, a constitutional law professor at the University of Alberta. Morton, he says, offers “an astounding proposition. I know he’s been making it for some time, but it is to me completely belied and undermined by a fair-minded reading of the judgment.”

Still, even if it were legally toothless, a referendum revealing deep hostility toward equalization would carry political oomph. It’s the equivalent of a hurled plate shattering on the kitchen wall next to a relative’s head—a measure of outrage and a cry for resolution. “After 20 years of fairly active Alberta politics, with virtually no result, the list of grievances is pretty extensive,” Morton says. “Equalization and transfers have gone nowhere. Everything we tried failed.”

Notley tried early on to voice both Alberta’s grievances and the need for the province to play a larger role in the country, says retired political scientist Roger Gibbins, a top authority on western alienation. Little came of it, he says. As for Kenney’s Quebec-inspired kicking up of federal dust, Gibbins doubts “a more aggressive stance toward Ottawa necessarily gives Alberta any more purchase”—especially when few people tend to take disaffected rumblings from wealthy, culturally non-distinct Alberta seriously.

Kenney says there’s a national unity crisis. That’s not far from how Gibbins sees it, but he suspects Kenney could deepen the alienation. “I’m not sure he would be disappointed if that’s happening, and I ﬁnd that rather distressing,” Gibbins says from his home in Vancouver. “Now that I’m sitting on the outside, I still don’t like to see this attempt to bring the province out of my country.”