Jean Béliveau: 'Not goodbye, but thank you' 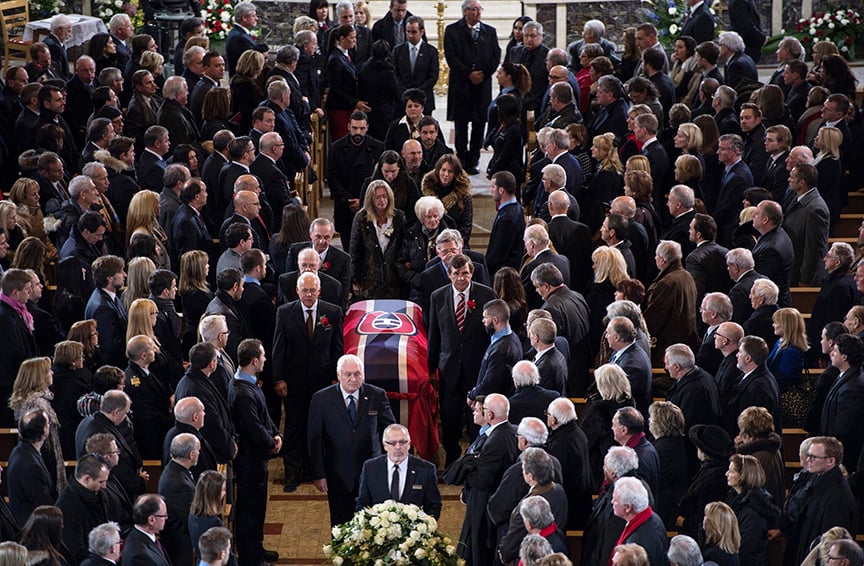 Being an enduring Montreal Canadiens legend entails certain duties, among them going to the funerals of your peers. Since 1985, Jean Béliveau has attended the funerals of Jacques Plante, Francis Clancy, George “Punch” Imlach, Doug Harvey, Hector “Toe” Blake, Maurice “Rocket” Richard, Red Storey, Bernie “Boom Boom” Geoffrion and Pat Burns. In 1996, Béliveau attended a funeral of sorts for the Montreal Forum, that sainted ground at Atwater and Ste. Catherine where he won all of his 10 Stanley Cups.

In 2008, after attending the funeral of close friend Paul-Emile Aquin, he was hospitalized after feeling faint. He suffered strokes in 2010 and 2012, broke his hip earlier this year and contracted pneumonia late last summer, complications from which are believed to have felled the man eight days ago.

Béliveau’s own funeral was a thing of simple if prolonged majesty—a display of collective grief from politicians and fellow hockey superstars, hemmed in by the tenets of old-school Catholicism. Clouds of smoke, homilies, Ave Maria, praise the Lord, Amen: Quebecers collectively shunned these rituals ages ago, yet embrace them when a notable one of their own from that era leaves the world.

And Béliveau, whose graceful sweep onto the Canadiens roster in 1953 turned a middling team into a permanent dynasty, was very much of that mythic era. In life, the Canadiens brass sometimes flashed Béliveau’s effigy on the Bell Centre screen, if only to stop fans from booing the American anthem (it always worked). Even in death, Béliveau compelled Montreal police, who for months have worn clownish takes on their uniform in protest of a pending pension reform, into proper pants for the occasion of his funeral.

Lucien Bouchard came up the red-carpeted sidewalk in the blustery snow, as did Jean Chrétien and Guy Carbonneau. Jacques Demers and Ken Dryden came too, as did Mario Lemieux, Brian Mulroney, Brendan Shanahan and NHL commissioner Gary Bettman. Justin Trudeau and Tom Mulcair, mortal political enemies, sat next to each other and chatted amicably. Stephen Harper sat in the front row, along with Governor General David Johnston, Montreal Mayor Denis Coderre and Premier Philippe Couillard.

The outside crowd clapped as his casket arrived in front of Mary, Queen of the World Cathedral. Inside, it was greeted with absolute silence, as quiet as it had been for nearly a minute the night before at the Bell Centre when he was honoured. Six pallbearers—Yvan Cournoyer, Guy Lafleur, Phil Goyette, Robert Rousseau, Jean-Guy Talbot and Serge Savard—carried the casket to within feet of the altar. It was draped in a Canadiens flag; team before country, after all.

“We shared so many amazing memories together,” said Dickie Moore, Beliveau’s former teammate. “I was lucky to have him as a friend. He wasn’t.”

“He used to tell me that time passes so fast. For 50 years we were friends. Oh capitaine, mon capitaine, bon voyage,” said Cournoyer.

“In the last days as a player he remained what he was the rest of his life: a presence,” said Ken Dryden, who played one season with Béliveau in 1971, when the team won the last of Béliveau’s 10 cups. “Jean’s greatest achievement might have been that he was a very nice guy. This is not a time to say goodbye, but a time to say thank you.”

Bread was broken, and communion offered. Monseigneur Christian Lépine threw holy water onto Béliveau’s casket. Then politicians, hockey players and hoi polloi alike marched out of the ornate, gold-encrusted confines of the cathedral into Montreal’s first true snowstorm of the year.