Anne Kingston on the life of the party, the symbolic hatchet-burying and the big schmooze

We weren’t even half an hour into the more than 2½ hours of tributes for Jean Chrétien on Tuesday night when the accolades turned Shakespearean. “There’s no legacy so rich as honesty,” Ontario Premier Kathleen Wynne told the crowd, quoting All’s Well That Ends Well, after giving the man famous as “the little guy from Shawinigan” props for his “integrity” and “authenticity.”

By then, the provincial leader had already hit on the real reason the crowd of more than 700 had shelled out $400 a plate to honour the former prime minister: his success as a retail politician: “You won three back-to-back governments,” Wynne said, before adding “not that I’m preoccupied with majorities—but I’ll take one.” Big applause, needless to say.

Wynne was a crowd favourite at the feel-good “cross-partisan” gala staged at a downtown Toronto hotel to celebrate Chrétien’s recent 80th birthday and his 50 years in Canadian politics—an event headlined as “50 Years of Standing Up for Canada,” a reference to the former PM’s rep as a pugnacious street fighter.

What the night was most of all, of course, was a big schmooze. “Everybody is here,” a political operative observed, looking across the cocktail reception jammed with the two-degrees-of-separation of Canadian political life. By “everybody,” he was referring to establishment players, including marquee names Bombardier and Stronach—Frank, there alongside his daughter, Belinda, the former Conservative MP turned Liberal MP returned to Magna CEO. Toronto mayoral candidate Karen Stinz was busy glad-handing, Dalton McGuinty back-slapping, Stéphane Dion quietly holding court, and an energetic, fit Chrétien happily shaking hands and posing for photos.

“It’s tribal,” one businessman explained. A photographer expressed frustration at trying to find Paul Martin, who was a no-show: “A lot of men here look like Paul Martin.” The homogeneity of the crowd was driven home before dinner, when a prominently black children’s choir took the stage to sing O Canada, their hands poignantly held to their hearts.

The evening that followed, a Canadian Kumbaya, played out on a stage backed by a gigantic maple-leaf flag. “Canadians have much more in common than things that separate us,” Charest said at the outset, calling the night “a unique event in Canadian politics” and “a celebration of an extraordinary life.” Tobin continued the theme of self-congratulation: “This room represents the best of Canadian politics.”

And what the room was busy doing, when not noshing on Canadian fare (Atlantic smoked-salmon salad, grilled “AAA corn-fed beef” tenderloin, “low-fat limoncello yogourt pannacotta, berry gazpacho, chocolate cake pop on a wave plate”) and sipping Canadian vintages, was burnishing the Chrétien legend —and, in so doing, past Liberal party triumphs. “I say history will record that he was one of the great prime ministers of this country,” Tobin offered. Charest cut to the chase: “There’s themes developing here—winning majorities.” Chrétien remains the most successful “living” Canadian prime minister, as one attendee put it, as well as the last liberal PM to preside over a majority government. A video tribute actually counted the days—3,650—that he’d served as PM. No one was hiding the wish that a little of that fairy dust would rub off on a party that hasn’t led a government since 2006. In 2012, Chrétien gave Justin Trudeau a muted endorsement, saying he’d be a “good candidate” for leader. More recently, the former PM has put his name on Liberal fundraising appeals.

The adage that eulogies reveal more about the speaker that the person being honoured held true last night. Charest, who joked that, since he’d left politics, “I MC events,” reminisced about the 1995 referendum alongside Chrétien: “I remember pouring our hearts out to get Quebeckers to vote for Canada.”

Knives stayed on the table, for the most part. There was no overt mention of the sponsorship scandal and rabid party infighting that accompanied Chrétien’s retirement in 2003. Former Conservative cabinet minister John Crosbie, wearing a white shirt with a sealskin vest and bow tie, got a few shots in. Though frail, Crosbie proved he still could engage a crowd, tossing out references to Idi Amin, Mae West and Vince Lombardi’s famous line in reference to Chrétien: “Winning isn’t everything; it’s the only thing.” He also lampooned Liberal leaders: “Eagles may soar, but weasels don’t get sucked into jet engines,” he said. “All Liberal leaders follow that principle.” He also alluded to Chrétien’s aggressive ways: “If something was not nailed down, it was his . . . That’s the type of man we’re honouring.” Still, Crosbie noted, Chrétien “was a leader admired” and “pretty much undefeatable.”

Prime Minister Stephen Harper donned a Liberal-red tie for his short video appearance, during which he noted that Chrétien shared a birthday (Jan. 11) with Conservative John A. Macdonald, who, the Prime Minister couldn’t resist noting, had presided over more majority governments. Both men “served Canada” and “loved to win,” Harper said. 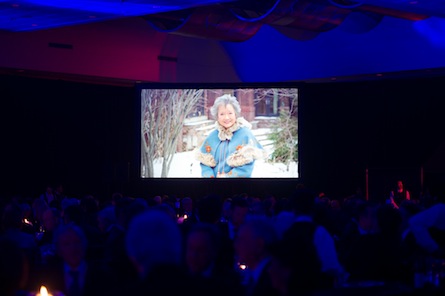 Adrienne Clarkson’s video address, on the other hand, bristled with enough subtext to fuel a PhD thesis. The former journalist, appointed governor general in 1999 on Chrétien’s recommendation, wasn’t out of her vice-regal post two weeks before publicly slamming Chrétien and his cabinet for failing to support her when she was under public attack for spending. Her tribute subtly alluded to thuggery: “Jean Chrétien made me an offer I couldn’t refuse,” she began, before making gentle barbs about “proroguing to golf.”

There was veiled reference to Chrétien ‘s Shawinigan handshake and mention of a fear she’d had that she and the former PM “would hand-wrestle and he would break my arm.” She also took a shot at the anointment of Liberal leaders. After rhyming off Chrétien’s long list of cabinet posts, Clarkson asked: “I thought, ‘If he wanted to become prime minister so badly, why didn’t he stick around as minister of finance?’ ”—a barb that drew a small gasp from the crowd. His refusal to send troops to Iraq was “a deeply personal sacrifice,” Clarkson said, noting it mean he’d forfeited the chance to sing the Whiffenpoof Song in duet with George W. Bush. She concluded by tweaking an old maxim: “Living well and long is the best revenge, and that’s what you are doing, prime minister. Congratulations.”

Justin Trudeau used his time at the podium to identify himself as “one of the successors of Jean Chrétien,” and reiterate his own campaign message that politics is about public service: “Mr. Chrétien understood that service to Canadians was the highest calling,” Trudeau said, adding: “Politics is the route; public service is the reward.” Chrétien kept the country “anchored in the liberal values shaped and informed by the great people of this country,” he said before getting a big laugh with what seemed a well-practised Chrétien imitation: “My friend, I am a Liberal: I keep my wallet on the right and my heart on the left.” (Alas, there was no camera pan to Chrétien for his reaction.) Trudeau paid fealty: “I wouldn’t be a Liberal leader worthy of the name if I didn’t hope to duplicate his success,” he said, ending: “You’ve left us with some very big shoes to fill.”

When Brian Tobin took the stage for his extended reminiscences, he suggested it might not be that easy: “Justin, this is one guy in Canada I wouldn’t get in the ring with.” The crowd laughed, but the message was clear. Tobin went on to share a very long story that involved Chrétien catching a lot of salmon when they went fishing in Newfoundland. Another story ended with the punch line: “Prime minister, you should have kicked that guy in the balls before you took him by the throat.” When it was his turn, Romanow expressed sadness it wasn’t a roast: “I have to play nice.” Still, he made a crack about Chrétien’s good health meaning that he was “depleting the Canadian pension,” which could make him the target of future Conservative attack ads. Former anchorman Lloyd Robertson got a bigger laugh during his video address, referring to not getting a Senate appointment from Chrétien, no stranger to patronage appointments: “We both dodged the bullet on that one, I think.”

Focus remained on Chrétien’s accomplishments. Trudeau reiterated his record of eliminating the deficit and reducing debt, extending marriage rights and reversing Canada’s “brain drain.” Former Liberal cabinet minister Anne McLellan, “representing the “class of ’93,” Chrétien’s first majority, praised the former PM for supporting women in politics, making 10 women cabinet ministers in his first government . Romanow cited the passing of the Clarity Act and the “Team Canada” trade and diplomatic missions he served on as a “stroke of nation-building genius.” His suggestion that “some Canadians leaders might take a lesson” from it won applause. The video tribute cited the former prime minister’s refusal to allow bank mergers, his signing of the Kyoto Accord and his reduction in unemployment. 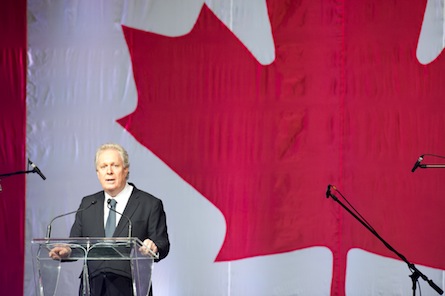 Charest, who made a few early flubs (calling Wynne “wine” and Lloyd Robertson “Floyd”), warmed to his hosting duties. “That was a great story about you and the prime minister fishing illegally in Newfoundland,” Charest cracked after Tobin finally cleared the stage. He also got a shot in at Toronto’s mayor: “We were going to present the video from Rob Ford but can’t find it anywhere.”
The Ford mention resonated after John Rae, longtime Chrétien aide (and brother to Bob Rae), noted how people loved to be photographed with Chrétien receiving a hostile “Shawinigan handshake.” It was a reminder of how infamy isn’t a disincentive to the Canadian electorate. Similarly, Ford’s ongoing scandal has only amped up people’s desire to take a photo with him. Rae, Chrétien’s former speech writer, ended his tribute by comparing the former PM to the racehorse Secretariat. He left the stage to a standing ovation.

At 10 o’clock, Chrétien finally took the podium to Canada’s version of the theme from Rocky: Bachman Turner Overdrive’s Taking Care of Business. The man lauded all night as “wiley,” “tough,” “ferocious,” “relentless” and “competitive” appeared reflective and conciliatory, praising the bipartisan theme of the evening: “What pleases me the most is that they made it a place for everyone. Political opponents who have remained friends is the best gift I can receive—and offer—to the country.” He praised his wife, Aline, “my rock of Gibraltar.” He name-checked others, including Crosbie, Charest, Romanow and Wynne, who was “taking a tough job, he said: “She does it with a lot of grace.” Oddly, there was no mention of Justin Trudeau.

The video tribute made clear why Chrétien is known as the “enforcer,” not an ideas man: “I always thought that leadership is to make the people feel good . . . For me, be happy and do your job,” he said. On the podium, he expressed “satisfaction to be part of the development of this nation.” He praised Canada for being ahead of other nations in social programs, including health care and immigration. “It was tough, yes, but I have no regret. Serving Canada is the best thing you can do in life,” he said, signing off: “Vive le Canada.”

The night ended with a final reminder of Canada’s political fluidity: Former NDP premier of Ontario-turned federal Liberal leader Bob Rae sat at a piano to lead the crowd in Happy Birthday, as a huge cake was brought out. “I’m not Marilyn Monroe,” Rae told the crowd, a reference to the actress who famously sang the song to president Kennedy. The crowd didn’t seem to mind. This is Canada.