Jodie Emery on her shocking arrest—and two nights in jail

The so-called "princess of pot" and her husband, Marc Emery, will fight trafficking and conspiracy charges—and continue their political advocacy 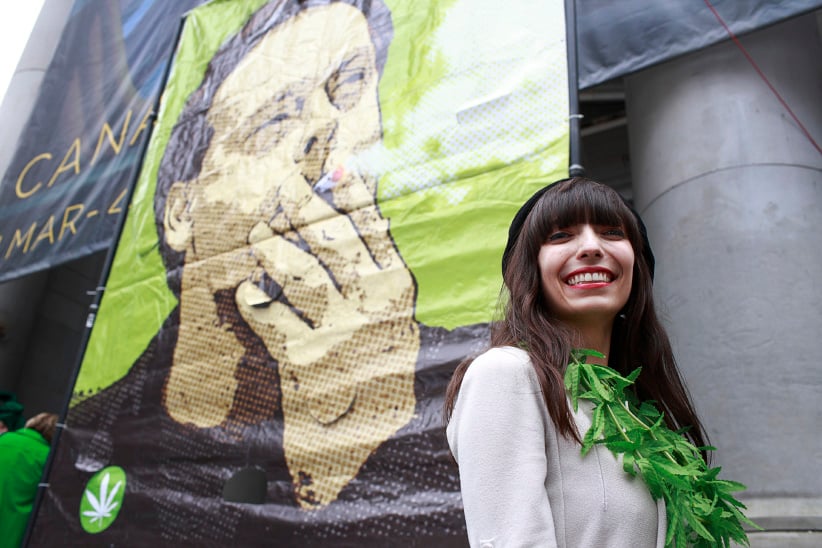 Jodie Emery, wife of marijuana activist Marc Emery, smiles as she speaks to thousands of enthusiasts gathered to celebrate the 19th anniversary of 4/20 on April 20, 2014 in downtown Vancouver. (Photo by Jeff Vinnick/Getty Images)

Though Marc and Jodie Emery—Canada’s so-called “Prince” and “Princess of Pot”—have for years been at the forefront of Cannabis Culture, a magazine turned business conglomerate turned franchise model for semi-legal marijuana dispensaries, last week brought the newest and largest hurdle to date: A shocking arrest outside Toronto’s Pearson Airport left the couple facing trafficking and conspiracy charges—plus a lifetime behind bars. Newly released and on bail, 32-year-old Jodie Emery tells Maclean’s exactly what happened and what comes next.

Q: Let’s start at the beginning. What happened on Wednesday?

A: I had just done a big interview about legalization on a round-table discussion panel, and Marc and I were on the way to the airport [headed to Spain] that evening in an Uber—which is ironic, given it’s also illegal and no one got arrested for that. We pulled into the airport and upon exiting the vehicle, plain-clothes officers said, “Marc Emery?” and handcuffed and arrested him. They said, “Stand back, miss,” to me and then arrested me, too. They did tell us we could call lawyers, but they said they didn’t want us to call from the airport since it’s a public phone, so they held us at the airport for about a half an hour waiting for vehicles to show up.

Q: How many officers were there? What were they like?

A: At least three officers identified themselves as Toronto Police, then there were airport police officers from Peel Region, and then they called up transport police. There may have been a drug squad there, too. They were pretty tough, but as a side note, one of the officers at 51 Division came up to me and said, “I just need you to know that I’m a huge fan of what you and Marc are doing. It’s really important work and I’m so sorry this has happened.” We heard that [sentiment] from a few people on the way, but other ones were happy to see us uncomfortable.

Q: So then the vehicles arrived and then what?

A: They drove us to 51 Division, the detention centre, and we were taken in separately. We both asked to speak to our lawyers right away, and we were told we have a right to contact our lawyer but they held us for many hours before we were actually able to speak to the lawyers. I was strip-searched, naked, and put into a cell with a concrete slab to sleep on overnight. You can’t really sleep. For hours and hours, I kept waking up, literally in a nightmare, thinking holy smokes, get me out of here.

Q: When did you speak to a lawyer?

A: It was late at night that our lawyer, Kirk Tousaw, was able to get a hold of us. This is a lawyer who’s gone to the Supreme Court of Canada and won to change marijuana laws in recent years. Jack Lloyd is the representative here in Toronto, who was at the courthouse the next day. I saw Marc at Old City Hall in the basement while we were waiting to see our lawyer. I also saw supporters who waved at me so I gave them the peace sign. Then the justice reprimanded me for that and I apologized. I didn’t know I couldn’t do that.

Q: What happened in court?

A: We were informed that the crown wanted to put the hearing over until Friday because there were more warrants being executed and they wanted to wait for those to be completed. So we were put back down into the cells and I was handcuffed and put into another transport vehicle and driven about an hour North of Toronto to the Vanier Centre. I was stripped naked yet again and given a needle for TB. They went through my property and told me I’d receive it all back, but my suitcase and a number of items are still missing. In the meantime, I’m wearing dirty underwear and no bra—they take it from you—and a green sweat suit. To me, it was a bit ironic because these green outfits were the exact same green as the Cannabis Culture logo. Just throw a CC logo on the front and I’m set.

Q: You’re joking now, but what were you feeling at the time?

A: To be honest, I was never afraid and I didn’t cry. Mostly my thinking was, “Wow, I can’t believe this is what it’s like.” My life has been devoted to protesting prohibition and protesting these kinds of arrests, so to be in the situation and experience first-hand what I’m protesting against was in a way helpful. I kept thinking, “Well, this is bad, but I know that all over the world there are prisoners being tortured and waterboarded.” But that doesn’t lessen the degrading nature of how I was treated.

Q: Did anybody recognize you in jail?

A: At one point, there were about 12 of us thrown into a cell, with one toilet with blood all over the toilet paper. One of the girls said, “Wait a minute, I know you! I know your husband! You guys are Cannabis Culture!” Another day, another girl told me she’d worked at a dispensary. I don’t know if that’s what she was there for, but she said she knew who we were. At one point, I innocently asked, “Will there be water available in our cells?” And [the guard] said, “Yes, yes, your human rights are covered.” I thought, “Okay, good, ‘cause I’m gonna tweet about that.”

A: At 5:30 a.m., I was awakened to be processed to go to court, which in itself took a number of hours. Then I was back in the prisoner truck, handcuffed to a poor woman who was coming down from who knows what, but she was not in good shape. On Friday, at about 11 a.m., we moved into a giant courtroom.

Q: At that point, you got some happy news.

A: As I was being led back to the cell, one of the corrections officers said, “You’ve got a few girls here who are really happy to see you!” It was Erin Goodwin and Britney Guerra, who are our very good friends and now co-accused. They jumped up and hugged me. They had shown up on Thursday at court to support us and got arrested. I saw Erin and Britney in the cell, and Marc and Chris [Goodwin, Erin’s husband and marijuana activist] were held in a separate cell. Then we were all handcuffed together, the five of us, hand-in-hand.

Q: All things considered, that sounds rather nice.

A: Yeah, it kinda was. Our time in the cell dragged out long after the release, it took four or five hours before the paperwork was brought and even the corrections officers looking after us were like, “This is insane; where’s the paperwork?” They kept making phone calls and saying they wanted to go home. I think the courthouse knew the media was there, but also that it was freezing cold outside, so they forced the media to wait. We feel it’s likely that they wanted to minimize the coverage of our release.

Q: What are the charges?

A: I’m looking at my bail sheet now, and there’s so many things listed here, traffic of marijuana, possession of proceeds. I believe it’s summarized as possession for the purpose of trafficking, possession of the proceeds of crime, and conspiracy to commit an indictable offence. From what I’ve seen and been told, it looks like we’re facing life in prison for these charges. It’s a very serious situation to be in.

Q: In the meantime, what happens?

A: At first I wasn’t sure if I’d even get out. The bail wasn’t money, they need surety, which means a person who owns property is willing to put it up. Thankfully my sister was willing to do that, so I have to abide by all my conditions to make sure they don’t throw me in jail and take her house. The conditions include I have to remain in the province of Ontario, except for scheduled visits to British Columbia. Do not traffic marijuana, do not aid or abet the opening or operations of any Cannabis Cultures stores, don’t have any dealings with the stores. I asked my lawyer, am I even allowed to say I believe dispensaries should be allowed? Is this “aid and abetting”? It might be, so in a way I feel my free speech is being infringed here. And we can’t consume any unlawful drugs or substances, so no smoking pot unless we get a prescription.

Q: Maybe you should get a prescription?

A: I’m a tough person, I’m very strong, but this has definitely affected me mentally. I have fear now when I see people who I think might be cops. Even sitting in this apartment, every time I hear the elevator open or a knock on the door or the beeping of a truck backing up outside—that’s the sound the prison vehicle made—so I’m realizing that maybe I’m having some symptoms of post-traumatic stress disorder, which I hear medical marijuana might help treat.

READ MORE: Is Canada ready to deal with stoned drivers?

Q: Are you nervous about speaking out as such?

A: For the record, I believe the police are listening to my phone right now. They have warrants to watch all our communications and likely have for the last eight or nine months. It’s a real violation. I’m in Toronto now, but they raided my apartment in Vancouver, tore things apart and terrorized my cat and threw plants around—not pot plants, houseplants. In Toronto, they’ve taken my luggage, so I’ve been stripped of my bra and socks and underwear, my glasses and my night guard. My teeth are aching from grinding. I feel very violated. Even sitting in this apartment right now, I wonder if there are bugs in the walls and if they are listening. Not that I have anything to hide—we’ve been very transparent and open with everything we do.

Q: What about people who will say, “Well, you broke the law. Repeatedly.”

A: I’d say women who demanded the right to vote also broke the law. Henry Morgentaler broke the law by opening abortion clinics and he got the Order of Canada. There are many different causes that have used civil disobediences to change the law. For those who say the law is the law, well, sometimes laws are unjust. Sunday shopping used to be illegal; slavery was very legal. Laws change all the time.

Q: So what’s next? If life in prison is a worst-case scenario—what’s the best?

A: They might offer a plea deal that’s very enticing, or we might go to the Supreme Court. If we wanted to mount a constitutional challenge, perhaps this could be our big victory. Then again, with the Liberals saying legalization will come in 2018, it’s possible our charges might be tossed out. In the meantime, I might want to run for office again and I will definitely be campaigning and writing more. Marc is working on his book. We want to do a cross-Canada tour and go back on the road. We’ll keep doing our political advocacy.