Anne Kingston: The allegation involving Jody Wilson-Raybould has effectively kneed the Liberal government where it hurts the most—squarely in its Real Change™ optics. 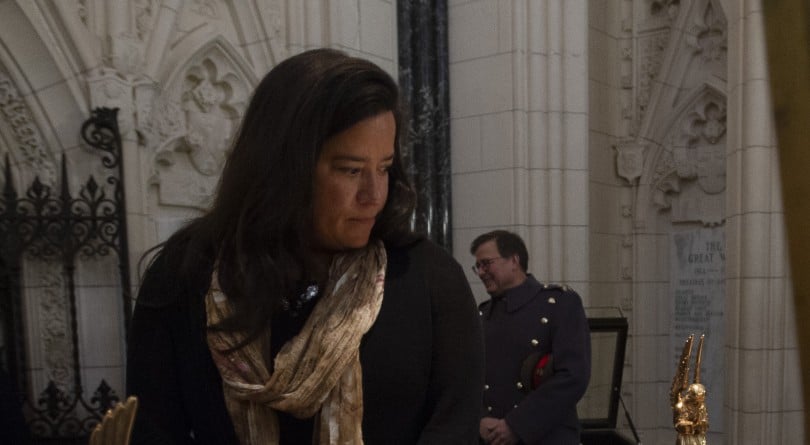 Veterans Affairs Minister Jody Wilson-Raybould views the the World War I Book of Remembrance before a ceremony closing the Memorial Chamber in Centre block on Parliament Hill in Ottawa, Monday February 4, 2019. (Adrian Wyld/CP)

There may or may not be a commission of inquiry into the grave allegation that PMO officials put heavy pressure on Jody Wilson-Raybould when she was Justice Minister and Attorney General to help Quebec-based SNC-Lavalin secure deferred prosecution; then, when she refused, she was demoted to Veterans Affairs. We don’t know. There may or may not be a shoe store of shoes yet to drop. We don’t know. Questions swirl in the vacuum of silence and absence of anything approaching clarity, their answers unknown. What we do know is this: the allegation involving Jody Wilson-Raybould and its aftermath has effectively kneed the Liberal government where it hurts the most—squarely in its Real Change™ optics.

Given Wilson-Raybould’s former central placement in Sunny Ways™ imagery—the optimistic, photogenic promise of Real Change™ in gender equality, reconciliation, climate change, governance and transparency, even how MPs are elected—this is a serious blow for the government, even a possible coup fatal.

Wilson-Raybould was B.C. regional chief for the Assembly of First Nations when recruited to run for office by Justin Trudeau in 2013. The former Crown prosecutor was a star candidate, a “get.” Her cabinet appointment acquired a political fairy-tale destiny after a 1983 video went viral featuring her father, then B.C. Chief Bill Wilson, and then prime minister Pierre Trudeau at a Constitutional conference. Wilson spoke proudly of his two girls wanting to become lawyers and, one day, prime minister. “Both of whom are women,” he said to laughter; after all, it was 1983; electing a Canadian woman prime minister was unimaginable. “Tell them I’ll stick around ‘til they’re ready,” Trudeau responded dryly, also to laughter.

Thirty-two years later, Trudeau’s son would be the prime minister appointing one of Wilson’s ambitious daughters to cabinet. (It was 2015; electing a Canadian woman prime minister remained unimaginable.) Wilson-Raybould wasn’t the first woman named to the post (that was Kim Campbell in 1990). But an Indigenous woman overseeing national justice sent out a powerful, emotionally charged, change-has-finally-come signal. It also dovetailed perfectly with the new government’s claim that Canada’s “most important” relationship is with Indigenous peoples and its vow to right myriad injustices: lifting the 2 percent cap on funding for First Nations; repealing the reviled Indian Act; building a new “nation to nation relationship”; completing an inquiry into the tragically unknown number of missing and murdered Indigenous women. As my colleague John Geddes writes in an insightful 2018 profile, “Jody Wilson-Raybould’s Vision to Save Canada,” she was an active, public player in the government’s reconciliation plan.

Yet not a year into the Liberal mandate was the government under fire for reconciliation symbolism being skin-deep, literally. Justin Trudeau’s prominent Haida raven tattoo, initially accepted by Haida leaders as a portent of a new government relationship, would be denounced as a symbol of cultural appropriation after Ottawa greenlit a LNG terminal in 2016 near the breeding grounds of one of B.C.’s biggest salmon runs.

Similarly, the Sunny Ways imagery infrastructure that buttressed the Liberal majority and telegraphed new hope would sag with time and controversies, among them an ethics violation, Trudeau’s optically disastrous trip to India, and the obtuse handling of an historical “groping” allegation. Even the thrill of strategic pics of a fun-socks-wearing or shirtless PM has dimmed.

It is revealing of the human need to construct pleasing narratives that the spectre of Wilson-Raybould as a politician acting with integrity, refusing to bend, has taken on such traction, even as details remain vague and Wilson-Raybould remains silent. Again, imagery is being dissected for clues: Wilson-Raybould’ body language during her swearing-in as Veteran Affairs Minister in January suggests she was mightily displeased, with none of the smiling or soulful eye-gazing with the PM seen in 2015. Her clothing, however, appeared to telegraph volumes: she wore a button blanket emblazoned with an eagle, her clan crest. Her replacement as Justice Minister and Attorney General, David Lametti, a white man, is a former law professor from Quebec.

Similarly, an usual statement issued by the former Justice Minister after her surprising demotion was destined to be avidly parsed. It now can be read as a defiant manifesto. Wilson-Raybould outlined “the dire social and economic realities that Indigenous peoples continue to face.” As Paul Wells points out, in the aftermath of SNC-Lavalin story, some lines read as damning, like this one: “It is a pillar of our democracy that our system of justice be free from even the perception of political interference and uphold the highest levels of public confidence.”

As the new Veterans Affairs Minister, Wilson-Raybould visibly embraced the role, traveling the country, making headlines. Yet, as a round-up of speeches given before her demotion reveals, the minister had voiced defiance and frustration for months. Last September, Wilson-Raybould suggested nothing has changed: “three years as a minister of the Crown I still have to contend—both personally and professionally—with a colonial legacy that remains pervasive despite best intentions.” She intimated her government was posturing: “Words, in the work of reconciliation, are also cheap without real action…” She emphasized the role women play: “it is typically the women in our communities who are leading the charge to decolonize and rebuild our governance models as our nations move away from colonial systems.”

Female leadership was a theme echoed in the no-holds-barred interview Wilson-Raybould’s father recently gave to Maclean’s. Bill Wilson, a prop in the feel-good 2015 story, is shaping a new narrative. “We’re a matriarchal tribe,” Wilson said, speaking with pride of his “very strong-willed and determined” daughter’s integrity. Wilson has been outspoken against the government in which her daughter is, at time of writing, still a cabinet minister. (In 2017, he called the handling of the MMIW inquiry “a bloody farce.” ) “Reconciliation is more a farce than the Conservatives,” Wilson told Maclean’s, as he impugned the current PM’s father: “They’ve been dancing around the table, just as the old man did with me.”

Wilson hinted that his daughter may have received other marching orders from the PMO while asserting she never shared cabinet confidences with him: “if the PMO told her that she should shut up about Indian Affairs and reconciliation, now you’re really talking about the violation of one’s integrity.” He described his daughter’s treatment with the sort of imagery no self-proclaimed feminist government wants association: “I think she was kicked in the teeth.”

Wilson made a prediction about his daughter: “I believe she could lose her career as a white politician. You don’t cross SNC-Lavalin and get away with it.” That doesn’t mean her career is over. Anything but. The allegation that Wilson-Raybould refused PMO interference has given rise to a new chapter, and profile, for a politician now heralded by some as a portent of real change within a Real Change™ government. It has even been posited that the Liberals’ “only hope”  is replacing Trudeau with Wilson-Raybould.

For now, however, Wilson-Raybould is silent beyond a “no comment” due to solicitor-client privilege. Her denial of the story could end this, but no denial has been made, leaving the unfortunate optic of a muted cabinet minister within a government that has vocally championed transparency yet has also indicated it plans to block Opposition efforts to probe the allegation.

A previously unnoticed speech Wilson-Raybould gave last fall features foreshadowing of a new possible optic, this one based in action. She quoted a Chief Joe Mathias during constitutional talks in the 1980s (“Behold the turtle… he moves forward when he sticks his neck out”): “The question remains today, ‘Are we prepared to stick our necks out?,’ Wilson-Raybould said: “I say, let us stick our necks out. I am.”