Liberals launched the refugee resettlement program in November, promising to bring in 25,000 by Dec. 31 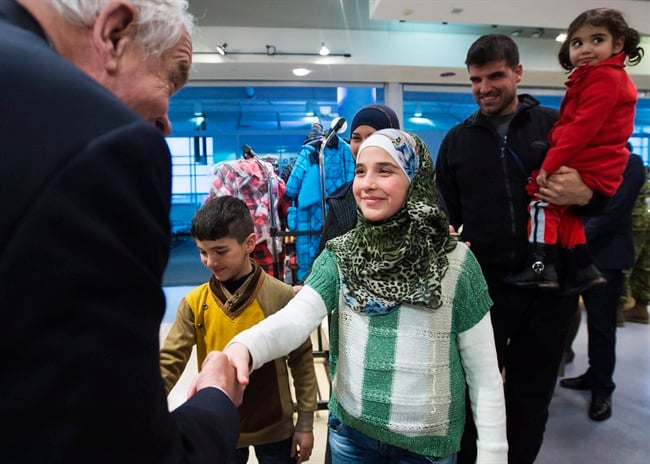 TORONTO – The legacy of Canada’s efforts to resettle thousands of Syrian refugees will eclipse any delays or hiccups in rolling out the program, the federal immigration minister said Monday in marking the 25,000th arrival.

“I think what people will really remember some years from now is that we helped these 25,000 people come to our country and now they are productive, hardworking Canadians,” Immigration, Refugees, and Citizenship Minister John McCallum told a news conference at Toronto’s Pearson airport.

“Many countries around the world today are making it more difficult for refugees to come in, they’re setting up more barriers, and we’re among the few countries saying, ‘No, come on in, we want to welcome 25,000 quickly.'”

McCallum was at the airport as the last two government-arranged refugee flights were arriving as part of the Liberals’ $678-million settlement plan.

Two special terminals set up in Toronto and Montreal will be shut down and any other Syrian refugees coming to Canada will arrive on commercial flights.

The refugee resettlement program was launched in November after the Liberals came to power, but it soon became apparent they would be unable to meet a promise to bring in 25,000 government-sponsored refugees by the end of the year.

Instead, the deadline was pushed to the end of February and the 25,000 Syrians that have already arrived are a mix of more than 14,300 refugees assisted by the government and about 8,500 sponsored privately.

McCallum called it a “significant milestone” but said the work continues to integrate the Syrians into the community.

An estimated 4.7 million Syrians have registered as refugees since the outbreak of the Syrian civil war in 2011, but the UN refugee agency is not seeking permanent new homes for that many.

Syrian refugees have gone to communities where there are settlement supports in place, with consideration given to whether they have family members in Canada, as well as the availability of schools, and housing, McCallum said.

“Canadians from coast to coast to coast will have a hand in welcoming, integrating and contributing to the success of our newest community members,” he said.

The UN has reached out to countries to absorb about 10 per cent and only Germany has made more official spaces formally available than Canada.