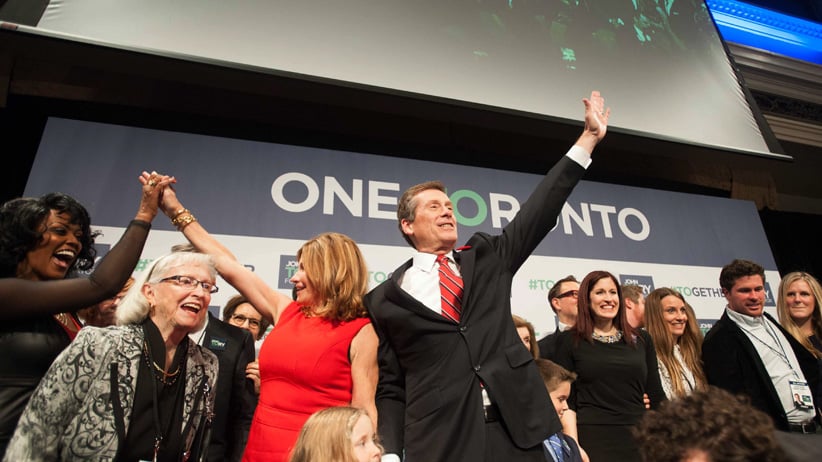 TORONTO – A former CFL chairman and business executive who ventured into politics only to fall flat in both municipal and provincial elections has finally earned a measure of political redemption alongside a chance to revamp Toronto’s reputation after four years of scandal.

“Torontonians want to see an end to the division that has paralyzed city hall for the past four years, and to all that I say, ‘Toronto, I hear you. I hear you loud and clear,'” Tory told a jubilant crowd during his victory speech.

Ford was forced to withdraw from the race due to a cancer diagnosis last month, but his elder brother Doug took his place on the ballot in a bid to keep the family’s hold on the city’s top job.

Despite a campaign that saw him post consistently strong poll numbers, Doug Ford fell short of Tory by more than 60,000 votes. Former NDP MP Olivia Chow finished third with about 23 per cent of the votes.

Tory said he looks forward to restoring Toronto’s reputation on the world stage, which he believes was tarnished by Rob Ford’s public struggles with drugs and alcohol and the international ridicule that ensued.

Turning Toronto into what he described as “a beacon of respect for everyone,” he said, could have benefits beyond the city limits.

“I just want to take the opportunity to build up Toronto, and I think by doing that you’re going to build up Canada.”

Tory has been out of the political arena since he gave up the party leadership in 2009 after failing to regain a seat in the legislature. Both he and the Conservatives were defeated in the 2007 election — a loss widely attributed to his proposal to fund faith-based schools.

Tory spent the ensuing years as a radio broadcaster and community activist, but the 60-year-old said he felt the need to make more of an impact in shaping the public agenda and bringing about lasting change.

That drive is what lured him back to the mailstrom of political life, he said, adding that its benefits outweigh the harsh lessons he’s been forced to learn.

“I was a broadcaster doing a very popular talk show where I know you have some degree of ability to influence things, I have been a public servant, I have been a business figure,” Tory said.

“There is no place you make a bigger difference to build up your own city or your own province or your own community than to be in public life. So to me it’s public service.”

Tory’s fiscally conservative approach made him a right-wing favourite in the race to replace Rob Ford, whose tenure Tory described as being marred by division and chaos.

His campaign has been framed as an effort to reinstate stability at city hall while addressing Toronto’s growing infrastructure challenges, and his message was well-received throughout the months-long campaign. Tory’s poll results consistently put him well ahead of Doug Ford and Chow.

Tory played peacemaker throughout the campaign despite a political environment he found to be more combative than those he’s experienced in the past.

Doug Ford, in particular, has accused Tory of being an out-of-touch elitist divorced from the needs of regular Torontonians, citing his birth into a prominent local family and rise through the ranks of both a private law firm and public telecom behemoth Rogers Communications.

Tory said his time as a business leader, fundraiser and community volunteer has given him experience in consensus-building that he feels voters find more relevant than his privileged background.

“Whether it’s your religion or your social status or what you did in your professional life, those who try to make those kinds of things an issue I think are seen as divisive,” he said.

This marked Tory’s second attempt to secure Toronto’s top job. The mayoral bid he launched in 2003 saw him come within five per cent of victory but ultimately fall short of left-leaning former city councillor David Miller.

Tory said the decline in city services that formed the central plank of his 2003 platform has only become more apparent in the 11 years since his last run for city hall. He also lamented the change in tone of city politics.

“The campaign in 2003 I don’t think involved a single personal attack between the three leading candidates, whereas this time it’s been very different,” he said. “I regret that. I don’t think it’s unique to Toronto, but it certainly has changed, and not for the better.”

He also spent eight years as chairman and commissioner of the Canadian Football League, both roles he held on a volunteer basis.

He has been married for 36 years to entrepreneur Barbara Hackett. They have four grown children.

CORRECTION: A previous version of this story incorrectly stated that Doug Ford had lost to Tory by more than 6,000 votes. The correct number was more than 60,000. That has now been reflected.