A couple held hostage for five years by a Taliban-linked network and forced to raise three children while in captivity were initially targeted for ransom because of the impending birth of their first child, the Canadian man at the heart of the case speculated Saturday.

Joshua Boyle said he and his wife Caitlan Coleman heard at least half a dozen reasons why they had been snatched from a village in Afghanistan and held against their will by the Haqqani network over the years they were imprisoned.

The most credible, however, had to do with the fact that Coleman was well into the third trimester of pregnancy at the time of their capture in 2012.

“As near as we can tell, we were targeted to be kidnapped because it was well-known by the eventual-kidnappers that Caitlan was heavily pregnant,” Boyle said in an email sent to the Canadian Press. “They spoke often immediately following the kidnapping that ‘America will pay for you very quickly, America will not want to risk the baby is born here in prison.'”

Boyle said Coleman was the obvious focus of the kidnappers during the first few weeks of captivity, seeing him as secondary.

Kidnappers used to taunt him by saying that the U.S. government was expressing interest in securing Coleman’s release while Canadian officials were showing no interest in his plight, Boyle said. There is no indication as to whether the captors were conveying accurate information at the time.

Their guards’ confidence in a “get-rich-quick scam” began to erode by late November, he said, a month after the couple had been seized and several weeks before the child was born at the end of December 2012.

Coleman would give birth three more times during the following five years, with two of the children surviving and accompanying their parents back to Canada after being liberated by Pakistani commandos.

One of the children, who Boyle described as an infant daughter, was killed in retaliation for his refusal to accept an offer from the kidnappers at some point during the family’s captivity.

Boyle did not elaborate on the offer, but called for his abductors to be brought to justice both for killing his daughter and raping Coleman.

Boyle told The Canadian Press that conditions during the five-year ordeal changed over time as the family was shuffled among at least three prisons. 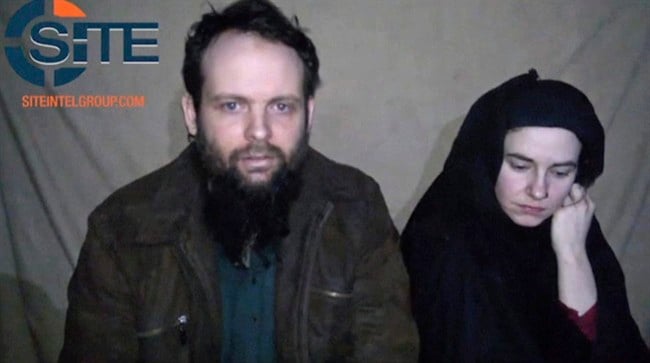 Conditions also varied based on the guards on duty, Boyle said, adding that one would allow the family to eat mangoes while another could withhold soap from the group for months at a time.

This certainly proved true on Oct. 11 when commandos stormed the area where the family was being held.

The rescuers were acting on intelligence from the United States indicating the group had been moved to Pakistan.

Boyle provided few details of the rescue other than to say it involved gunfire surrounding a car in which the group was travelling.

He said the rescue was the most dramatic example yet of the pattern of reversed expectations.

“When it became clear that there were bullets ripping into the car we assumed this to be very bad … but by the grace of God, no, it turns out it was the best thing to happen to us in five years,” he said.

RELATED: Parents of Canadian hostage held in Afghanistan speak out

The release came nearly five years to the day since Boyle and Coleman lost touch with their families while travelling in a mountainous region near the Afghan capital, Kabul.

The couple had set off in the summer 2012 for a journey that took them to Russia, the central Asian countries of Kazakhstan, Tajikistan and Kyrgyzstan, and eventually to to Afghanistan.

Boyle said the couple was helping ordinary villagers in a Taliban-controlled area when they were seized.

The family returned to Toronto aboard an Air Canada flight on Friday night.

Boyle said an initial statement delivered to reporters was delayed due to a “medical emergency” involving one of his children. But Saturday morning, he released a statement to CTV News saying that doctors believe his youngest daughter will recover.

“Our daughter has had a cursory medical exam last night, and hospital staff were enthusiastically insistent that her chances seemed miraculously high based on a quick physical.”

He wrote in the statement that medical work-ups are being arranged for the rest of his family, and that “God-willing”, the physical and mental healing process will soon begin. 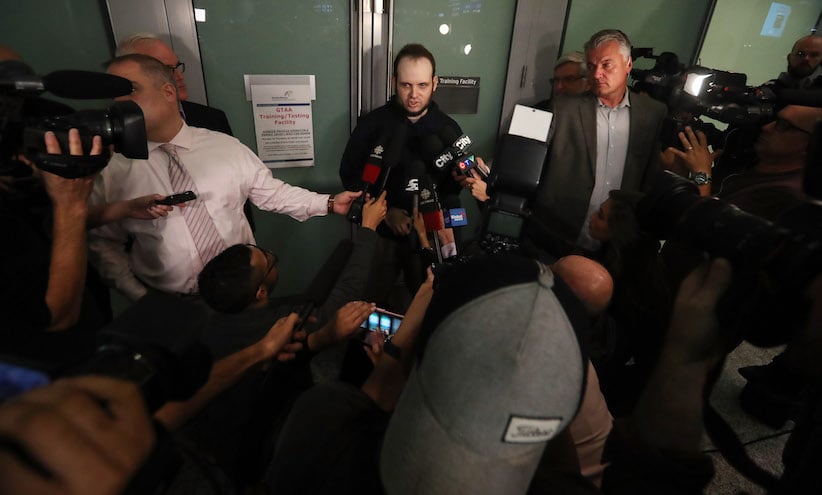 Joshua Boyle speaks to media. He and his wife Caitlan Coleman and their two sons, 4 and 2, and newborn daughter returned to Canada after being held hostage for five years at Pearson International Airport in Mississauga. October 13, 2017. (Steve Russell/Toronto Star via Getty Images)

On Thursday, officials in Pakistan said the family had been rescued in “an intelligence-based operation” after their captors moved them across the border from Afghanistan.

The couple had set off in the summer 2012 on a journey that took them to Russia, the central Asian countries of Kazakhstan, Tajikistan and Kyrgyzstan, and then to Afghanistan.

Their release came nearly five years to the day after Boyle and Coleman lost touch with their families while travelling in a mountainous region near the Afghan capital, Kabul.

Coleman’s parents last heard from their son-in-law on Oct. 8, 2012, from an Internet cafe in what Boyle described as an “unsafe” part of Afghanistan.

Pakistan’s Foreign Ministry spokesman, Nafees Zakaria, said the Pakistani raid that led to the family’s rescue was based on a tip from U.S. intelligence and shows that Pakistan will act against a “common enemy” when Washington shares information.

U.S. officials have long accused Pakistan of ignoring groups like the Haqqani network. The Americans consider it a terrorist organization and have targeted its leaders with drone strikes.

But the Haqqani group also operates like a criminal network. Unlike the Islamic State group, it does not typically execute Western hostages, preferring to ransom them for cash.

A U.S. national security official, who was not authorized to discuss operational details of the release and spoke only on condition of anonymity, said the U.S. obtained actionable information, passed it to Pakistani government officials, asked them to interdict and recover the hostages — and they did.

Boyle was once married to Zaynab Khadr, the older sister of former Guantanamo Bay detainee Omar Khadr and the daughter of a senior al-Qaida financier. Her father, the late Ahmed Said Khadr, and the family stayed with Osama bin Laden briefly when Omar Khadr was a boy.

The Canadian-born Omar Khadr was 15 when he was captured by U.S. troops following a firefight and was taken to the U.S. detention centre at Guantanamo Bay. Officials had discounted any link between that background and Boyle’s capture, with one official describing it in 2014 as a “horrible coincidence.”

The U.S. Justice Department said neither Boyle nor Coleman is wanted for any federal crime.

—With files from the Associated Press