The most Harper-friendly debate-viewing crowd in the land gives their man warm reviews. But did he do enough? 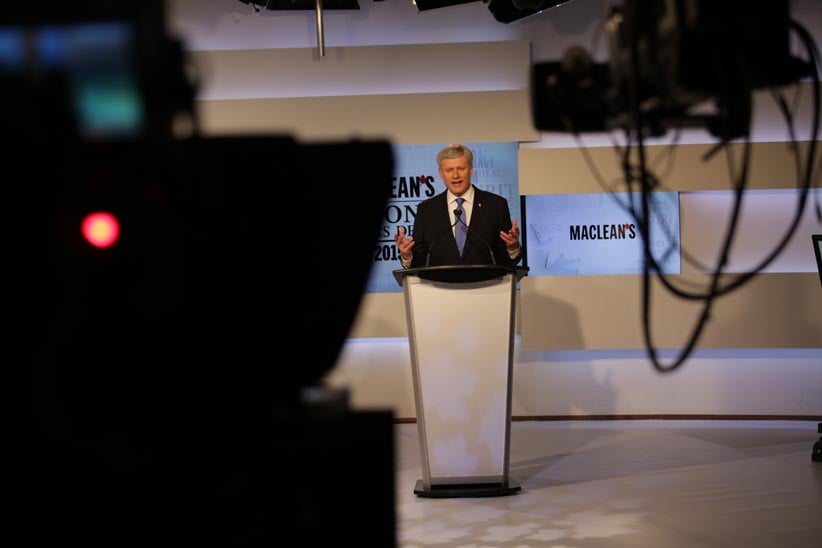 The Calgary think tank named after Preston Manning held a debate viewing party, and yes, you don’t need multiple guesses as to which party leader won in that crowd’s opinion. But after moderator Paul Wells thanked the audience, this group was less interested in applauding its Conservative man and more keen to switch the video screens to whatever soundbite howlers Donald Trump was screaming at his Republican rivals. The chatter near the cash bar at the Manning Centre for Building Democracy was largely not about Harper, but about how the other three surprised or outperformed expectations.

Because with Stephen Harper, of course he’d look solid to them. Of course he’d look like the Prime Minister he’s been for the last nine years. This was the start of his fifth round of campaign debates—among the other three, only Green Leader Elizabeth May had appeared on political Front Page Challenge before.

“He showed great confidence, without showing aggression,” Robert McRudden said of the Prime Minister. “He looked so confident,” he continued, in a way that seemed like he was going to throw in some analogy or offer a counterweight. No, that’s it. Harper was confident. Harper was reliably Harper.

In one of the most Harper-friendly crowds one might find anywhere in what’s long been the first city of Harper conservatism, there was little worry that their movement’s veteran leader would lose his cool, stumble or falter. In the Manning Centre’s refurbished downtown heritage building’s lecture room, tidy row on row of leather easy chairs with swivel tables, the mostly young, mostly svelte Junior Chamber of Commerce-style crowd often laughed at their opposition—mostly Trudeau—and laughed with Harper when he replied to May’s charges on fracking and oil sands subsidies: “Neither of these things are true.”

But while he didn’t do anything to break spirit there, Harper also didn’t deliver many of the zinger lines, though the polite admonishing of Justin Trudeau and Thomas Mulcair on their sovereignty referendum squabble at least had spectators nodding a lot.

To Philip Schuman, who works in commercial insurance, Harper came best prepared with facts and persuasive arguments. Mulcair and Trudeau were too busy posing—the New Democrat to come across as happy and kindly, the Liberal to come across as earnest and ready. Schuman, like the rest of us, has grown over the years to forget that Harper, too, is posing. He is portraying the reassuring and coolly prime ministerial character armed with his details and his “let me be clear” clarity. He is doing his performer’s best to not unleash his dry wit or dismissive tone that puts him at risk of the gaffes or surprises he and his crew so diligently try to avoid. It’s just that he’s been performing effectively in this role for so long that we no longer notice.

So it went on the energy and environment section, the issue that touched almost all these Calgarians’ livelihoods—whether they work for law firms, energy companies, real estate boards or large insurers. Here, there were various sorts of crowd laughter as well, including the nervous type when Wells reminded Harper he’d promised in 2008 there would be emissions regulations for the oil and gas sector but still weren’t anywhere in sight. Harper, cognizant of the record he must be judged by, stuck to his insistence that Canada move in lockstep with an “intergrated North American sector.” He stressed the fact that carbon emissions are down over his term, and when confronted by May that the megatonnage dropped when the global recession hit and have steadily risen since, the Conservative leader didn’t debate with her. Debating might get him into trouble. He simply repeated: “Well, greenhouse gas emissions have gone down, and the economy has grown. Those are the facts.” He also dug into his line that carbon pricing is a “front” to raise government revenue, and didn’t do much that shave down that assertion with the nuance the moderator or rivals wished for.

On pipelines, Harper was mostly happy to see the opposition rivals tangle with each other on how opposed or supportive they are of whichever uncertain project. After emerging from most pile-ons without many scuff marks, he happily thrusted at Mulcair for being too anti-pipeline after Trudeau hit that way, and May whacked from the other direction.

Harper’s record took a beating over those two hours, largely over the shaky economy, deficits and his mess of a Senate, but you wouldn’t know it from looking at the guy. He didn’t do much of anything to turn off his base, while Trudeau had to splay himself in defence of his C-51 actions, and Mulcair on national unity and pipelines.

If the Manning Centre attendees weren’t all proclaiming proudly their guy was the knock-’em-out winner, then at least they were pleased—and totally unsurprised—that Stephen Harper walked out of the debate as the Stephen Harper who entered. Their main concern is how things rearrange among Harper’s rivals, and how their fortunes would rise and fall. While some Calgary seats will make the Conservatives fight this election, they know that the race will once again be won or lost far outside of their milieu, among those who weren’t likely to give a thought to voting for the evening’s most confident and reliable debate performer.