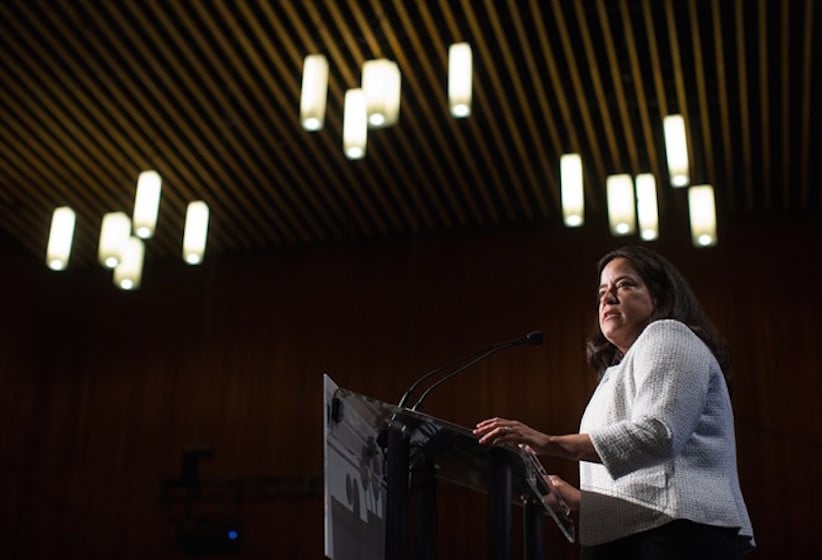 VANCOUVER – Canada must adopt the United Nations Declaration on the Rights of Indigenous Peoples in a way that translates into real change for its aboriginal citizens, federal Justice Minister Jody Wilson-Raybould says.

She faced criticism earlier this summer after telling an Assembly of First Nations meeting that her government would not directly adopt the declaration into law, but rather implement it through consultation.

On Wednesday, Wilson-Raybould told an annual gathering of British Columbia cabinet ministers and First Nations leaders that it’s important to appreciate why Canada cannot simply incorporate the declaration “word for word” into law.

“The hard and sometimes painful truth is that many of our current realities do not align with the standards of the United Nations declaration, and as such they must be systemically and coherently dismantled,” she said.

The declaration spells out rights that constitute the minimum standards for “the survival, dignity and well-being of the indigenous peoples of the world.” One central article recognizes the right to self-determination and notes indigenous peoples have the right to lands, territories and natural resources that they traditionally owned or occupied.

Canada officially removed its objector status to the declaration in May, almost a decade after it was adopted by the United Nations.

Wilson-Raybould said she was inspired by a conversation with a Maori leader during a recent trip to New Zealand. The woman told her that adopting the UN declaration was meaningless if it didn’t result in real change.

“She basically told our delegation that in her opinion, rights are essentially nothing if you do not have the will or the power to act on them — to get, as she said, out of bed in the morning,” the justice minister said.

Wilson-Raybould, a former B.C. Assembly of First Nations regional chief, said the Indian Act is inconsistent with the UN declaration, but questions need to be considered before the federal law is overhauled, such as how bands want to move toward new models of self-government.

The implementation of the declaration has to take into account specific constitutional and legal contexts in Canada as well as the wishes of aboriginal groups, she said. The federal government must also determine which laws need to be amended and how, she added.

Earlier Wednesday, the annual gathering got off to a rocky start when the leader of the Union of B.C. Indian Chiefs berated the provincial government for its decisions on the environment and resource development.

Grand Chief Stewart Phillip delivered a speech immediately after Aboriginal Relations Minister John Rustad at the opening of the meeting of dozens of aboriginal leaders and government officials in Vancouver.

Rustad touted the B.C. Liberal government’s work on First Nations issues, including its promise to establish bus service along the so-called Highway of Tears and a recently announced economic agreement with the B.C. Assembly of First Nations.

But Phillip, referring to Rustad’s speech, told the crowd that if it takes that many words to describe how well a relationship is working, then the relationship isn’t working at all.

He criticized Premier Christy Clark’s government for its decision to build the Site C dam in northern B.C. over the opposition of local First Nations, and said the last time aboriginal people had a responsive government was when Gordon Campbell was premier.

Rustad was not immediately available to respond to Phillip’s comments. Clark was set to speak later Wednesday.