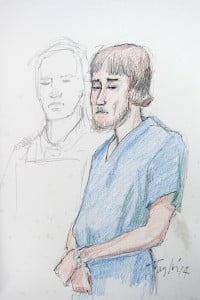 Justin Bourque in an artist’s sketch during his court appearance in Moncton on Friday, June 6, 2014. (Carol Taylor/CP)

Justin Bourque, 24, also pleaded guilty to two counts of attempted murder in the wounding of two other officers during his appearance in the Court of Queen’s Bench.

He calmly told the judge “I plead guilty” or replied “guilty” when asked for his plea on each charge.

Bourque returns to court Oct. 27 when victim impact statements and pre-sentencing documents will be filed.

Bourque was recently found competent and mentally fit to stand trial after undergoing a psychiatric assessment. Details of that assessment have been sealed by the court.

Members of Bourque’s family refused to comment as they left the court as did Supt. Marlene Snowman, the top officer for the RCMP at the Moncton detachment.

Constables Dave Ross, Fabrice Gevaudan and Douglas Larche were killed after responding to a report of a man with firearms in a residential neighbourhood in the northwest area of Moncton on June 4.

Constables Eric Dubois and Darlene Goguen were wounded and later released from hospital.

Bourque was arrested following a manhunt that spanned 30 hours and brought the city of 69,000 to a virtual standstill.

Comments in an affidavit signed by Bourque’s father that was filed in provincial court last month provides a view into Justin Bourque’s behaviour before the shootings.

Just days before the shootings, Victor Bourque said his son was ranting against authority and growing paranoid.

In the two-page affidavit, the father said he did not notice any serious mental or emotional problems with his son until about 18 months ago when he said Justin Bourque’s condition began deteriorating.

The affidavit was used by Justin Bourque’s lawyer in court to request a psychiatric assessment for his client, which was granted by a judge.

The document contains assertions by Victor Bourque that have not been proven in court, but in it he says his son went from living with his parents and six siblings in Moncton to buying a gun, getting kicked out of the house, and becoming depressed and paranoid.

“We were a very close-knit family until Justin was asked by his mother and me to leave the home,” he said. “His inappropriate behaviour and his purchase of yet another gun prompted our request.”

Victor Bourque said things only got worse after that. During his visits home, he said his son appeared seriously depressed and was emotionally and financially unstable.

“Often, he would pace back and forth while talking about things that made no sense to me or other members of the family,” said Bourque.

Bourque said he was unable to reason with his son or calm him down while giving him a drive to work about two days before the shootings.

“He was ranting and raging against all authority and concerning himself with matters which were well beyond his control and some issues not even relating to Canada,” he said.

“This behaviour I can only describe as paranoia.”

The day of the shootings, Victor Bourque said he was with his son about 2 1/2 hours before shots rang out in Moncton’s north end. Justin Bourque told his father he was going to work but his employer called to say he never showed up.

Bourque said that’s when he reached out to his son.

“I called him to ask why he lied to me — he was distant and disrespectful to me on the telephone,” he said. “He hung up on me. He had never spoken to me in this fashion before. His tone was very dry and as if it was another person speaking.”