Justin Trudeau on his father, his family and what's behind his run

Watch for our exclusive interview in this week's magazine 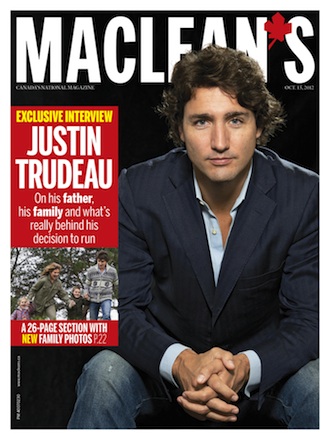 For many observers, Justin Trudeau’s bid to lead Canada’s Liberal party was a matter of “when” not “if.”

But as his destiny plays out, the 40-year-old MP knows his biggest challenge will be to prove there is more to recommend him than his family name.

In an interview in this week’s edition of Maclean’s, Trudeau tells Maclean’s Jonathon Gatehouse that although he had been shaped by his father’s values and vision, he’s very much his own man. “This is not the ghost of my father running for the leadership of the Liberal Party. This is me.”

And to focus on what he’s not is to lose sight of what Justin Trudeau undeniably is, writes Gatehouse: the most popular politician in all of Canada. A passionate orator and effective advocate for all sorts of causes. The kind of boldface name who can draw packed crowds to Liberal fundraisers anywhere in the country, whether it’s a barbeque in Windsor, Ont., university pub nights in Vancouver, or even a Stampede breakfast in hostile Calgary.

In a feature that includes new photos of Trudeau and his young family, Gatehouse reveals a man who is finally ready to emerge from his father’s long shadow and try to engage Canadians on his own terms. “Why am I doing this? Because I can, not because I want to. Because I must,” Trudeau says.

Also on Justin Trudeau in this week’s issue:

Maclean’s on the iPad: