Justin Trudeau visited Calgary and Edmonton to try to mollify a vulnerable-feeling province. But the big question remains: Do Alberta's pipeline dreams stand a chance? 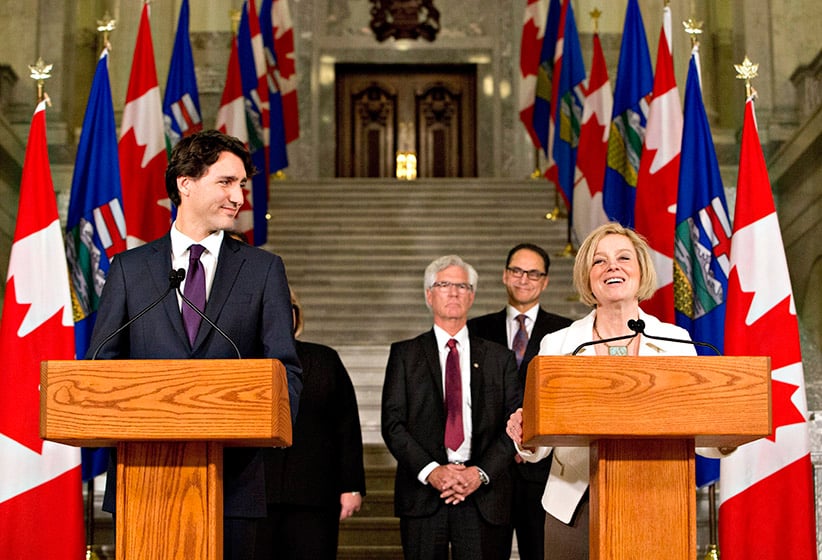 And the best he could bring on his two-day visit, in terms of quick help in this province’s second year of recession, was pledge to fast-track $700 million of Conservative-era infrastructure funding that hasn’t been allocated yet, though other provinces still waiting for old grants appear in line for the same treatment. Oh, and there’s the almost-commitment of $250 million from an obscure federal stabilization program whose formula was capped in the 1980s. For the Alberta government, that’s enough to offset the budgetary impact of less than a $1.50 US drop in the per-barrel oil price, when crude’s benchmark price is sitting $30 below where Alberta expected it to be next fiscal year.

Or, in the parlance of newspaper headlines: “DROPS TO FLOW INTO ALBERTA BUCKET.”

It was Trudeau’s first visit to Alberta as Prime Minister, and he expressed his sympathies to the province, pledging long-term support and conveying the message that the federal government and all Canadians have the suffering community in their thoughts. In that way, his visit bore tonal similarities to his visit to La Loche, Sask. a week earlier—albeit in entirely different circumstances. In both cases, there wasn’t much in the way of obvious, big fixes to the complicated problems. And in the case of that thudding sound coming from what everyone used to call Alberta’s economic engine, it’s a head-scratcher as to what Ottawa can do to help turn this around.

There are some patches proposed: some tweaks to Employment Insurance eligibility rules for the growing number of Albertans who need it, and Notley suggested Wednesday that Trudeau could use some federal levers to increase investment, particularly the Business Development Bank of Canada and the Western Economic Diversification fund — similar to manoeuvres in last fall’s budget by her command-control NDP government, empowering ATB Financial bank to lend more and directing Alberta’s institutional investment fund to spend more locally.

The Liberals first used their unorthodox election promise to enthusiastically run deficits as a means of providing infrastructure projects as economic stimulus, and they’re making many noises now that Alberta will get help on that front. It’s made to sound like special treatment, but the Prime Minister carefully appended “and, indeed, (to) all provinces and territories” to his infrastructure commitment. While he’s trying to convey that he’s attentive to Alberta’s needs, Trudeau is a politician aware that there are many yapping little birdie beaks in the nest of Confederation, none of which will tolerate fewer worms. And while the suddenness and raw size of Alberta’s slide makes it stand apart—even more so than oil-producer siblings Saskatchewan and Newfoundland and Labrador—its employment levels remain at the national average, as economist Stephen Tapp emphasized this week.

Related: How will Trudeau’s pan-Canadian plans survive the new federalism?

Trudeau’s trip to Edmonton (to meet with government and energy sector unions) and Calgary (oilpatch executives) came as a sort of national-unity exercise after the weeks of bickering sown by Montreal Mayor Denis Coderre’s trash talk on the Energy East pipeline, and return volleys about equalization and St. Lawrence River sewage dumping from conservatives in Ottawa, Alberta and Saskatchewan.

Trudeau appears to worry Alberta is feeling unloved and vulnerable, shocked by a sharp economic decline and with its natural resources seriously landlocked, even after the new government’s latest attempts to do serious things on climate-change.

“Alberta contributed tremendously to Canada’s growth over the past decade and now that we’re facing challenging times in Alberta, Canada will be there for them,” Trudeau said Thursday after touring Calgary’s YWCA, a social agency that has its hands full with more people who need its help. He noted that the building also got hammered in 2013, by the Bow River flood.

(It is worth noting here that a couple weeks earlier, Trudeau senior adviser Gerald Butts made his own fact-finding trip to Alberta, a source told Maclean’s. That’s the sort of reconnaissance mission a political office doesn’t undertake if it’s merely bidding to do some lip service to a problem.)

Helping out Alberta, to Trudeau, also means “we must get Alberta’s resources to market in responsible, sustainable ways.” But he repeatedly refuses to cite support for any specific oil pipeline, and he’s done the opposite of Stephen Harper’s resolute championing of those projects. He helped depress hopes for Northern Gateway with the Liberal ban on B.C. coast tanker traffic, and last week’s augmentations for the National Energy Board process will slow any eventual approval of Energy East or the Trans Mountain expansion through Burnaby—and he refuses even say his cabinet would OK those projects if the regulator gave its nod, reasoning that saying what he would do after the process would prejudice that process. “Cheerleaders don’t score goals, and for 10 years nothing got built,” Trudeau told reporters in Edmonton, a night before his sit-downs with the oil sector.

For years, many in the oilpatch were bringing pom-poms to the pipeline debate. On Thursday, reporters got the first sense executives may be warming to Trudeau’s different, more neutral approach. “It’s part of gaining Canada’s trust, and there’s not a lot of trust in government, the regulatory regime or in industry, so we need to address that,” said Mark Salkeld, CEO of the Petroleum Services Association of Canada.

“We had a predecessor that was a strong champion of industry and nothing happened,” Salkeld said, after his group’s meeting with Trudeau and Notley.  “Be enthusiastic? No. I think he needs to be engaged with everybody to get it done right.”

Salkeld was saying this moments after warning that “if we don’t get things moving relatively quickly, there’s going to be a generational loss, and we can’t afford that.” But there seems to be more awareness that pipelines will happen either with public buy-in or not at all, and that ramming them through the process is a bad long-term plan for a sector that’s often vilified nationally.

As a wise newspaper colleague noted: if a senior oilpatch figure is echoing Liberal talking points, that’s a big win. Now, if Trudeau can get other corners of the country to do the same, the pipelines Alberta needs may have a fighting chance.