While Canada’s allies renew their war on terror against Islamic State, the Liberals stick to a promise to withdraw our jets 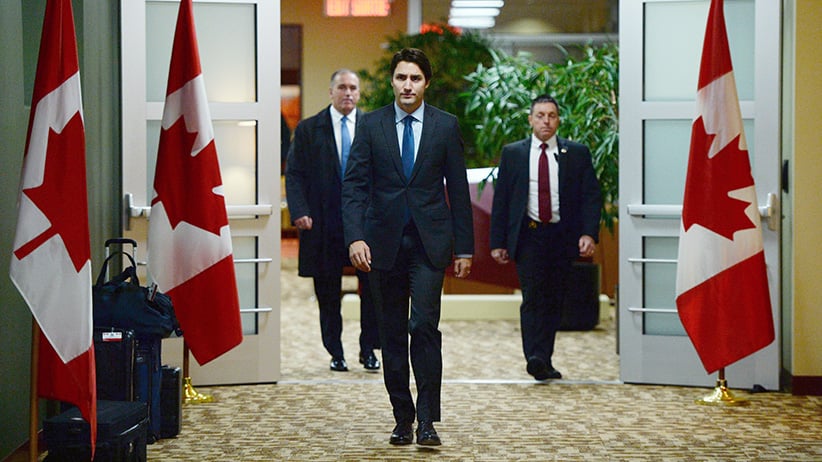 Canadian Prime Minister Justin Trudeau arrives to address the media on the terrorist attacks in Paris prior to his departure for the G20 and APEC summits from Ottawa, Friday November 13, 2015. (Sean Kilpatrick/CP)

After the attacks in Paris, there was no way Prime Minister Justin Trudeau could make his plan to pull Canadian fighter jets out of the U.S.-led campaign against ISIS sound inspiring. Not with French President François Hollande calling for “a union of all who can fight this terrorist army in a single coalition,” and U.S. President Barack Obama vowing to “redouble our efforts” to eliminate the so-called Islamic State. The best Trudeau could hope to do—since he seemed determined to stick with his election pledge to withdraw the six CF-18s—was try shifting attention to how Canada might boost its contribution elsewhere. “Training is something we do very, very well,” he said. “And that’s something we’re looking to be very helpful to other members of the coalition with, to make sure Canada is doing more than its part in the war against ISIS.”

If stepped-up training of Iraq’s forces is really going to qualify as Canada “doing more than its part,” Trudeau will have to make a big new commitment. Under a mission launched by the former Conservative government, a modest contingent of no more than 69 Canadian special forces troops is on the ground in northern Iraq, training and assisting local Kurdish militia in their fight against ISIS. Critics of Trudeau’s approach don’t see any reason he couldn’t offer more training while leaving the CF-18s in combat—beyond his reluctance to renege on the Liberal election pledge to bring the jets home. “Simply sticking with a campaign promise doesn’t amount to a justification,” said security expert Wesley Wark, a visiting professor at the University of Ottawa’s graduate school of public and international affairs. “I think his international counterparts are going to find the Canadian position mystifying.”

But the French, at least, are taking pains not to turn Trudeau’s exit from the air war into a sore point. “We would be concerned if Canada had the intent, or had announced, that it will get out of the coalition, withdraw from the coalition,” says Nicolas Chapuis, France’s ambassador to Canada. “It’s not the case. At all.” Chapuis’s conciliatory tone had to come as a relief to Trudeau. His government has barely moved into its new offices, and he’s already grappling with a tangle of foreign policy and defence challenges, most related to the chaotic situation in Syria and Iraq.

Even before the latest terrorist outrages, Trudeau’s vow to end the CF-18 bombing missions against ISIS was controversial. The Paris attacks also put his campaign promise to bring 25,000 Syrian refugees to Canada by the end of the year under even more intense scrutiny. About that enormously ambitious project, fears have arisen that ISIS might somehow plant its operatives among the refugees. Reports suggest one of the terrorists who died in the Paris attacks might have slipped into Europe, through Greece, among the hundreds of thousands of migrants escaping the horrors of the civil war in Syria. That led to a spate of U.S. governors, mostly Republicans, trying to ban Syrian refugees from settling in their states, even though they lack the legal authority to do so.

The reaction in Canada was somewhat more muted, but Saskatchewan Premier Brad Wall released an open letter to Trudeau, urging him to slow his new government’s drive to admit 25,000 refugees by Dec. 31, a campaign commitment. “I understand that the overwhelming majority of refugees are fleeing violence and bloodshed and pose no threat to anyone,” Wall wrote. “However, if even a small number of individuals who wish to do harm to our country are able to enter Canada as a result of a rushed refugee-resettlement process, the results could be devastating.”

In an interview, Wall stressed that he’s not against bringing a lot more Syrians to Canada, given sufficient time. He said his concern about the Liberal election pledge isn’t just over the security screening of the refugees, but also figuring out exactly where they will live. “So, for reasons of safety, for reasons of appropriate settlement, let’s move toward a large intake, doing our part, certainly, but let’s not have it driven by a deadline,” he said. “We won’t be doing the refugees a favour, and we won’t be doing Canada’s reputation any favour at all, if we rush this to a deadline, rather than to results.”

Wall seemed attuned to news coming out of Europe, alluding to reports that “insurgents” might have infiltrated a big refugee camp on the fringes of the northern French city of Calais. But Wark says there’s no real parallel between the overwhelming challenges Europe faces and the target the Liberals have set for Canada. European countries are coping with hundreds of thousands of migrants who arrive without systematic screening. The Canadian government’s plan is to pick and choose refugees now living in camps in Lebanon, Jordan, and perhaps Turkey, and fly them to Canada. Wark says the plan looked admirably generous from the outset, and retreating from it due to security anxieties in the wake of the Paris attacks would be “wholly wrong and exaggerated.”

Although Immigration, Refugees and Citizenship Minister John McCallum hasn’t yet announced details of the plan, he has promised thorough security and health checks of all the Syrian refugees. Experts say that probably means Ottawa will pick many of them from camps where the United National High Commissioner for Refugees is reasonably well organized. “Most of those people will already have gone through some sort of the screening process by the United Nations, and possibly from front-line immigration officers from Canada and elsewhere,” Wark says. “We are capable, and have long experience in doing the kind of security screening you need to do on the front line.”

Beyond rigorous security screening, selecting 25,000 refugees, flying them to Canada, and accommodating them when they arrive—all in about the next six weeks—is a huge undertaking. By comparison, only 683 sponsored Syrian refugees were flown to Canada during the eight weeks between Sept. 9 and Nov. 3. The Canadian Forces will almost certainly be heavily involved, likely in both air-lifting hundreds of refugees daily out of the Middle East and housing them for at least several weeks on bases in Canada. That humanitarian effort has the potential to dominate the federal agenda for the rest of 2015, perhaps drawing public attention away from nagging questions about Canada’s military contribution to the fight against ISIS.

But those concerns are almost certain to resurface in 2016. Trudeau indicated he would bring the CF-18s home before the scheduled end of their current mission, as set by the former Conservative government, in March. If training remains Trudeau’s preferred option, then David Perry, senior analyst with the Ottawa-based Canadian Global Affairs Institute, says the Canadian Forces is capable of contributing much more than the few dozen special forces members now helping Kurdish fighters. Up to 950 Canadian training advisers, Perry notes, worked with Afghan forces from 2011 to 2014. Something approaching that scale again might even begin to look like Canada doing “more than its part.”