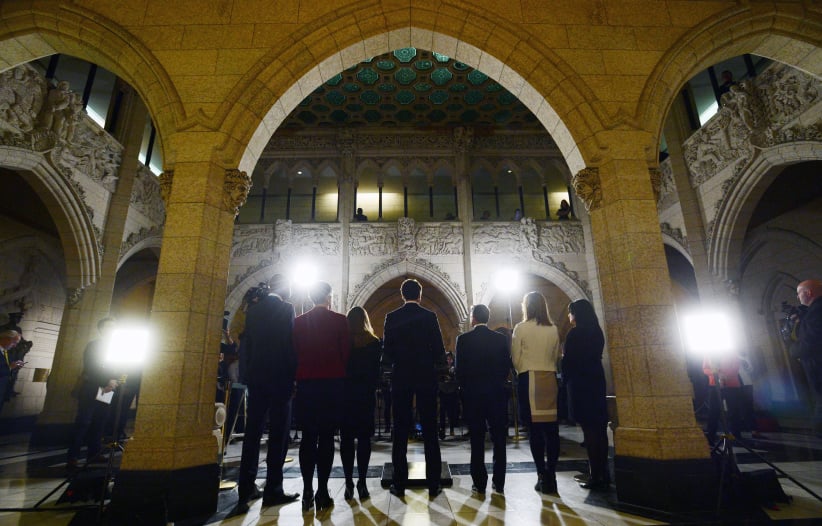 It was called a “facelift,” and indeed it was. Prime Minister Justin Trudeau, no stranger to visual storytelling (read: “optics”) exhibited it in glorious form today as he shuffled his cabinet in preparation for a Donald Trump presidency. Chrystia Freeland, former trade minister, was promoted to Foreign Affairs, replacing Stéphane Dion. Freeland will be replaced by the well-regarded François-Philippe Champagne, a 46-year-old former trade lawyer who was parliamentary secretary to the finance minister. Champagne, a cabinet novice, will be responsible for dealing with the barrage of trade reforms promised by Trump.

The shuffle also succeeded in producing a younger, most racially diverse and Instagram-friendly Canadian political executive. The mid-season makeover show keeps Trudeau’s celebrated 50:50 female:male cabinet ratio intact while rewarding the young, the energetic and the photogenic.

RELATED: What you need to know about Trudeau’s cabinet shuffle

This telegraphs volumes. Iranian-born Maryam Monsef, who spent much of last year under fire, first for her birth story, then for her bungling of the electoral reform file that saw her attack the committee charged with making recommendations, maintains a cabinet seat—clearly a reward for staying on even the most implausible talking points. But she’s being sent to the newly renovated Status of Women office which is, tellingly, widely read as a demotion, given, well, the status of women generally, even in the cabinet of a repeatedly self-identified “feminist.”

Dumping the Iranian-born refugee, a rookie MP, from cabinet would have been an optics fail for Trudeau, read as abandonment. Yet replacing the 31-year-old Monsef with 29-year-old Karina Gould, an Oxford-educated rookie MP and former parliamentary secretary to the minister of international development and La Francophonie, can also be read as a signal: that the government’s course on the troubled file isn’t changing—and that the complex electoral reform mandate doesn’t require a more experienced hand at the tiller. There’s also an unfortunate optical takeaway: that young, female rookie MPs are fungible.

MORE: Who is Karina Gould?

The shuffle produced a cabinet more diverse in every way but in age. Former Status of Women minister, 50-year-old Patty Hajdu, was shifted to Labour and Employment, replacing 61-year-old MaryAnn Mihychuk, who was dumped. It also removed two members of the white, male, old guard—along with 61-year-old Dion, 66-year-old John McCallum exits as minister of immigration, refugees and citizenship, replaced by 40-year-old Somalian-born Ahmed Hussen, a former Toronto lawyer, himself a refugee.

The veteran pols will land in diplomatic posts—China for McCallum, likely France for Dion. Three over-60 members of cabinet leaving brings the average age down by three years, to 49.7, and the number of over-60 ministers in a 32-member cabinet to six. That makes the 45-year-old Trudeau, if not yet elder statesman, closer to it.

Freeland is at the shuffle’s centre, clearly rewarded for her last-minute victory salvaging CETA. That the former journalist is now the country’s emissary in an emerging Trump-Putin landscape comes with built-in optics. Freeland’s much-lauded 2012 book, Plutocrats: The Rise of the New Global Super-Rich and the Fall of Everyone Else, makes clear that she understands the financial benefits of entering politics: “One thing that isn’t in dispute is the material value of a political career after leaving office,” she writes. “Politicians can’t fully monetize their plutocratic networks until they retire.” (Clearly she was writing before anyone anticipated Trump enriching himself in office.)

Plutocrats, widely heralded as an exposé of rising global income inequity—and named as a prime reason Trudeau recruited Freeland to run in a 2013 by-election—is more accurately a voyeuristic glimpse of the lifestyles and habits of the world’s oligarchs, featuring much gossip about Russia. She refers to Putin, but not glowingly: “Russia, of course, gives plutocracy a bad name,” she writes. Freeland, whose mother helped draft the Ukrainian constitution in the 1990s, was among politicians and lawmakers banned from Russia in 2014 in retaliation for Canada putting sanctions over Ukraine.

Plutocrats doesn’t mention Trump, which the new president will undoubtedly see as a slight if he bothers to get someone to read the index for him. But the book leaves little doubt that the media-savvy Freeland is intimately acquainted with how rich, old powerful men and oligarchs operate. And that will be indispensable ammunition in her new role.

John McCallum is out as immigration minister. He was replaced by 40-year-old Ahmed Hussen.

Patricia Hajdu, 50, was replaced by Maryam Monsef, 32, as minister of status of women.

Chrystia Freeland (promoted to foreign affairs minister) is replaced by Francois-Philippe Champagne, 46, as the trade minister

MaryAnn Mihychuk, 61, was fired as Employment and Labour minister, replaced by Patty Hajdu, 50.

Stephane Dion, 61, was removed from the prestigious foreign affairs post, and replaced by Freeland, 48