Kacee Vasudeva made auto parts and bug repellant. Then he retooled for the pandemic.

When the need for domestically produced PPE soared last year, Vasudeva's Maxtech retooled its production lines and got to work 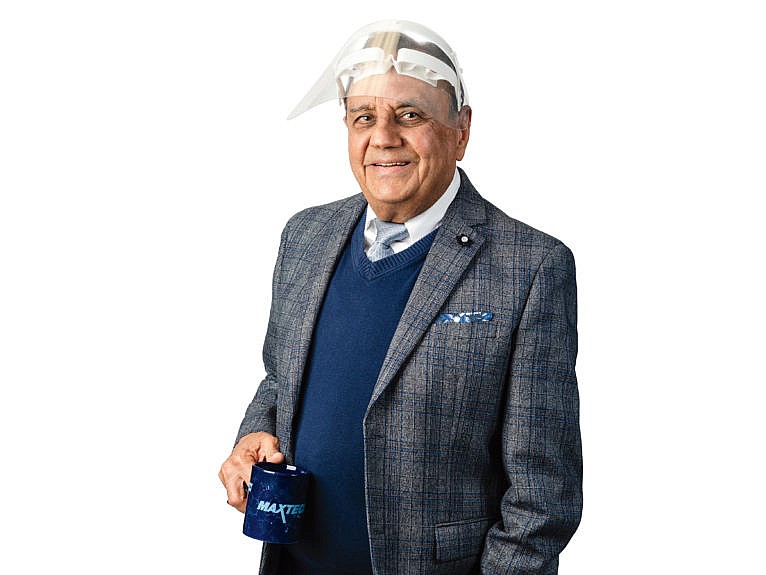 Kacee Vasudeva. This portrait was taken in accordance with public health recommendations, taking all necessary steps to protect participants from COVID-19 (Photograph by Lucy Lu)

Flavio Volpe first met Kacee Vasudeva in the midst of a global financial crisis that threatened to bring down major automakers. Volpe was the chief of staff to Sandra Pupatello, Ontario’s economic development minister, and his job back in 2009 was to help prevent the unthinkable. Vasudeva, then vice-chair of the Auto Parts Manufacturers’ Association, was representing companies that supplied all the building blocks that go into each vehicle.

Automakers were struggling to pay the companies that fuelled their supply chains. Vasudeva, who immigrated to Canada from India in 1971 and has since joined two prime ministers on trade missions abroad, was a crucial player in a deal that saw his members get paid. “He does not have an off switch,” says Volpe, who is now president of the same auto parts lobby group.

That relentlessness came in handy when Canada plunged into an economic crisis all over again in 2020. Five days after the WHO declared a pandemic, and as governments scrambled for scarce PPE supplies, Volpe appealed to his members to “do our part and step up”—and retool production lines so they could spit out masks, face shields, gowns and even ventilators.

Vasudeva was one of the first to sign up. “When COVID happened, we knew our country was in trouble. What could we do?” he says. Plenty, it turns out. Vasudeva runs Maxtech, a Waterloo, Ont.-based manufacturer of braking assembly and battery coolant parts, as well as hand tools and power-tool accessories for retailers like Canadian Tire and Home Hardware. Another division of the company produces fruit fly traps, mosquito repellant and even a surge protector that doubles as a bedbug trap. He started Maxtech—then Maxi-Flow—from his garage in 1977, and claims to hold more patents than anyone else in Canada.

Within weeks of Volpe’s call to arms, fuelled by partnerships with every major post-secondary institution in Kitchener-Waterloo, Maxtech was working on prototypes for clear masks, tiltable face shields, a card badge with a slot for hand sanitizer (sanitizer sold separately), and a wearable infrared pendant that discourages face-touching by emitting a tiny electric shock if the user makes the wrong move. “We have applied for 12 patents in the last year,” he says. The company, which retooled before signing any contracts with customers, was selling everything to retailers (except the pendant, which is still in development) within three months.

NASA’s Jet Propulsion Laboratory is marketing a similar pendant, dubbed Pulse, but Vasudeva insists he was first to apply for a patent (and says he won’t hesitate to stand up for his intellectual property).

Rishabh Agnihotri, Maxtech’s sales communication manager, says the company’s next innovation involves a coating for face shields, developed in partnership with the Indian Institutes of Technology, that it says can kill the coronavirus on contact. That product still needs a green light from Health Canada. But the production lines are ready to go.