Kanye West, Pitbull to perform at closing of Pan Am Games 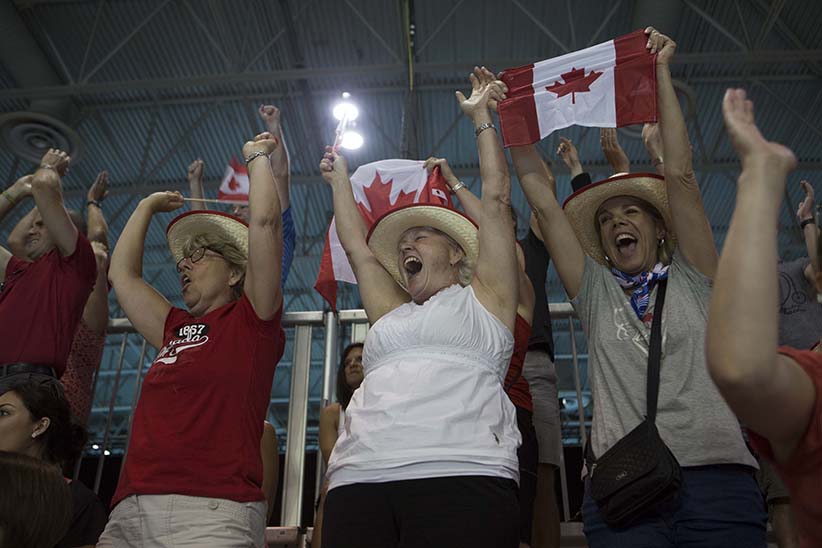 Sandra Purves (left) and Cindy McKelvie celebrate Canada’s win over Dominican Republic in men’s handball. Purves and McKelvie were part of a group of eight women who play together on a volleyball team in Sarnia and travelled together to Toronto to watch the Pan Am games. Photograph by Della Rollins.

TORONTO — The Pan Am Games come to an end tonight, with a closing ceremony set to feature Kanye West.

The Chicago hip-hop artist will be joined by Serena Ryder of Millbrook, Ont., and Miami pop-rapper Pitbull for the ceremony, to be held at Toronto’s Rogers Centre.

Although organizers have been secretive about plans for the ceremony, they allowed a few details at a news conference on Friday.

As of Friday, organizers said a “couple thousand” tickets remained available, although the opening ceremony in the same venue drew a sold-out crowd of roughly 45,000.

Ryder will sing the Pan Am Games’ official song “Together We Are One,” reflecting the show’s theme, which TO2015 organizing committee CEO Saad Rafi said was “unity through diversity.”

He also promised that the show would close with a “huge, captivating” fireworks show that would be even bigger than what audiences saw at the opening.

Each of the three featured artists is expected to play a few songs. The ceremony will also feature the parade of nations (less formal than in the opening) and the handover to Lima, Peru, which will hold the next Pan Am Games in 2019.

Rafi stressed Friday that the show’s featured musical guests, though they merited most of the headlines, are only part of the show.

“It’s really important to be clear that the closing ceremonies are for the athletes — for the spectators and the audience (too) but traditionally it’s to celebrate the athletes and their performance,” he said.

“It’s not their concert,” he added later. “`It’s the closing ceremonies and they’re performing in it — all three of them, I might add.”