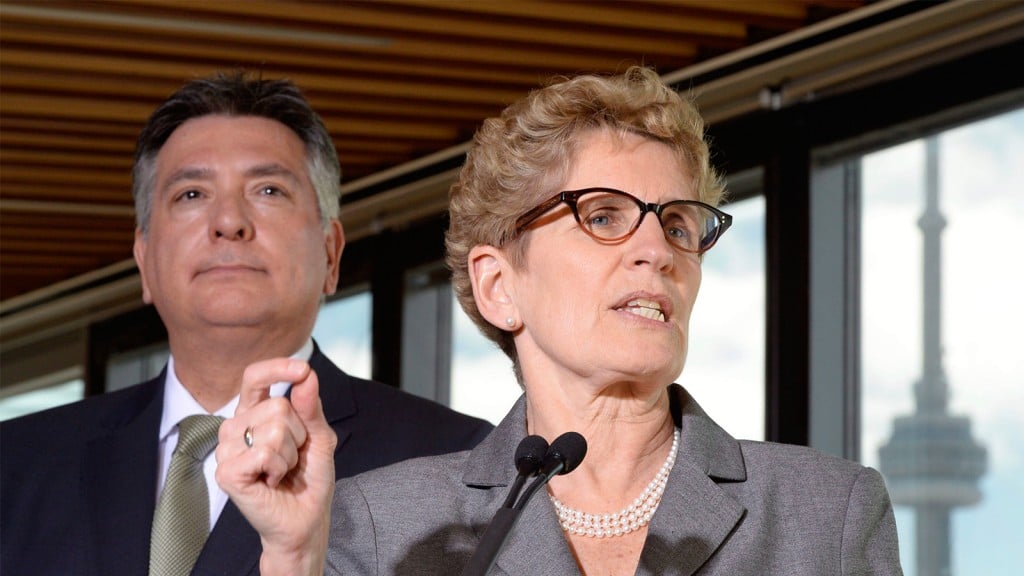 TORONTO — Ontario Premier Kathleen Wynne went into a 40-day election campaign facing a Red Sea of troubles: a massive $12.5-billion deficit, several spending scandals and a police investigation that reached all the way to the premier’s office.

But with her Liberals winning a majority government Thursday, Wynne emerged as the saviour of her party’s flock, putting a fresh face on a troubled party that has ruled Canada’s most populous province for more than a decade.

It was no easy feat. Wynne spent a lot of time during the campaign defending herself against accusations of corruption and mismanagement that have plagued her since she was sworn in as premier more than a year ago.

There was an endless barrage of recriminations from the Progressive Conservatives and New Democrats over the scandals she inherited from her predecessor Dalton McGuinty.

She had to answer for the cancellation of two gas plants that will cost an estimated $1.1 billion, a criminal probe into the questionable business dealings of the province’s Ornge air ambulance service and a multimillion-dollar decision to bail out the MaRS innovation and research complex in Toronto.

But in life, as well as politics, you have to play the hand that you’re dealt, Wynne said in a recent interview with The Canadian Press.

“You deal with the factors and the challenges that you’re given, and my approach has been to make the very best of what I’ve been given,” she said.

“I have experienced success, I think, because I’ve tried to turn whatever the challenge is into energy and into a positive force.”

But the Pollyanna premier has flexed her muscles, picking a fight with Prime Minister Stephen Harper over a proposed made-in-Ontario pension plan, spurring an angry Tony Clement to publicly say he wanted her to lose.

When the Tories claimed before the election that Wynne may have tried to cover up the deletion of documents about the gas plants for political reasons, she slapped them with a $2-million lawsuit.

It likely wasn’t just about preserving her reputation as premier, but protecting Wynne’s biggest asset and the foundation upon which the 2014 Liberal campaign was built: authenticity, an elusive quality among politicians.

“Authenticity is the most important thing you can have as a political leader,” said one senior Liberal campaign official. “She hasn’t got a phoney bone in her body. And I think that shows so loud and clear.”

Former prime minister Jean Chrétien, the self-described “little guy from Shawinigan” who loved to roll up his shirt sleeves and dive into welcoming crowds, had that political royal jelly. Wynne is similar in that she doesn’t come across as a “super buffed, polished, professional politician,” said the official.

Greeted by an ecstatic toddler at a Sudbury campaign rally, Wynne joined her in jumping up and down with a laugh — her staff call it “grandma mode.” She was perennially late at campaign events, often taking too long to talk to supporters as she made her way to the exit.

“She’s very real,” the official said. “And she’s got a tone of politics and a style of politics that we’re not used to, partially because of her background.”

Born in Toronto, she married Phil Cowperthwaite in 1977 and moved to the Netherlands for a few years before returning to Canada. She has a son and two daughters as well as three grandchildren.

But the marriage didn’t last. Wynne came out as a lesbian at age 37 and in 2005 married Jane Rounthwaite, whom she’d first met in university about 30 years prior. The two were inseparable over the marathon campaign across the province.

A former school board trustee, Wynne said she made the jump to provincial politics to stop the cuts imposed by the Tories under Mike Harris. His “Common Sense Revolution” in the 1990s slashed spending and pushed ahead with controversial changes to public services that sparked widespread labour unrest and sometimes violent demonstrations.

“I think the first defining moment for me was when Mike Harris cut social assistance rates by 21 per cent and then at the same time was sending … a $200 cheque to everyone in the province,” she said. “I was so angry.”

It “lit a fire” under her, Wynne said. Like-minded people banded together from across Toronto, angry at a government that focused in the individual, rather than the public good.

She was elected to the legislature in 2003 after serving as trustee and running her own company as a conflict mediation professional.

Her reputation as a conciliator was part of her appeal during the 2013 leadership contest, a skill she’s used to make peace with public school teachers angry over wage-freeze legislation and appointing herself agriculture minister to mend fences with communities upset over decisions to cancel the slots-at-racetracks program and the installation of industrial wind turbines.

She also managed to pass one budget by tailoring it to satisfy the New Democrats, who helped to trigger the election last month by pulling their support for the Liberals.

Experts say she’s more “austerity light” than McGuinty, having pulled the party to the left of the political spectrum as premier by putting public services ahead of wrestling down Ontario’s massive deficit by 2017-18.

Her campaign platform is diametrically opposite to the Tories: stimulate the economy with big spending. She proposed $29 billion for public transit, roads and bridges over a decade, billions more to lure and keep businesses to Ontario and better wages for workers in health-care and education.

It allowed her to woo NDP supporters who feared a slash-and-burn Tory government, while also exploiting the Conservative plan to cut 100,000 public sector jobs to balance the budget as an economic apocalypse only she could stop.

Wynne’s stumbling block was that she was in the inner circle that made those decisions to cancel the gas plants, said Myer Siemiatycki, politics professor at Toronto’s Ryerson University.

“There is a certain point at which the past does come back to haunt,” he said.

“And even if she was not the main driving force behind any of the problematic areas of the McGuinty government, she was on board when they were made. That’s the dilemma that has dogged her and faced her in this campaign.”

Wynne has recognized that she couldn’t completely erase the past, Siemiatycki said.

“I think what she’s tried in the campaign is, let’s focus on the future and who do you think is the best candidate for premier going forward.”