Three ministers had already resigned before this shuffle, which comes halfway through Wynne's mandate 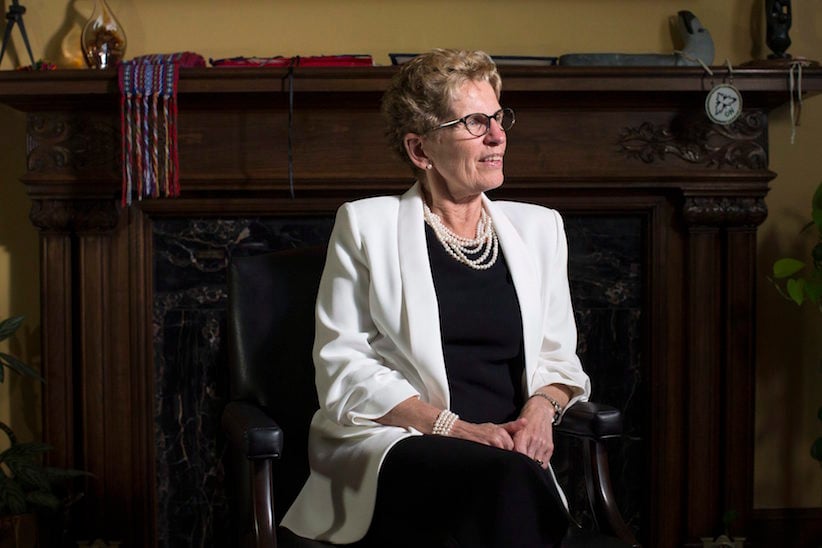 Ontario Premier Kathleen Wynne is photographed in her office in the Queens Park Legislature in Toronto on Thursday, June 9, 2016. Wynne dreams of a rosy future of cleaner air, pensions for all and billions of dollars of gleaming new infrastructure.But she is now halfway through her mandate, and her hopes of re-election in 2018 may depend on voters sharing her long-term view. THE CANADIAN PRESS/Chris Young

TORONTO — Premier Kathleen Wynne will promote some new faces to the front benches of the Ontario legislature Monday in her first cabinet shuffle since leading the Liberals back to a majority government in June 2014.

Deputy cabinet chair Jim Bradley announced Sunday he was stepping down from the executive council to make room for new blood at the cabinet table, following the resignations last week of three other ministers.

It’s “normal” for ministers to change roles and responsibilities at the mid-point of a mandate, said Bradley, who will assume the duty of chief government whip in the legislature.

“There is a window of opportunity at this time for the premier to include in her cabinet a number of new and very capable individuals who are eager to accept additional responsibility as members of the executive council,” he said in a statement.

“I have suggested to the premier that I assist in the effort by relinquishing my position…thereby opening a position in cabinet for a new appointee.”

No names were confirmed late Sunday, but some of the backbenchers most often talked about as cabinet prospects included Sudbury’s Glen Thibeault, who is a former NDP MP, Burlington’s Eleanor McMahon and Ottawa’s Marie-France Lalonde.

Wynne spent Sunday making calls to let people know who’s in — and who’s out — of her cabinet, the inner circle that will be the face of the Liberal government heading into the election scheduled for June 2018.

Genevieve Tellier, political studies professor at the University of Ottawa, said a shuffle makes sense with the next election just two years away.

“It’s easier for the government to get prepared, so now they know the time they need to have new files and get prepared for the next election,” Tellier said.

“I think it’s perfect timing, two years to bring in new blood, get them working on the files, see how they perform…also a reinvigorated cabinet and government, broadly that’s a good thing.”

The legislature adjourned last Thursday until September, so ministers will have several months to get up to speed before facing the opposition parties in question period.

Attorney General Madeleine Meilleur, Seniors Affairs Minister Mario Sergio and Municipal Affairs Minister Ted McMeekin all stepped down ahead of the mid-term shakeup, with McMeekin saying he wanted to make room for more women in cabinet.

Wynne has already said it would be difficult to match Prime Minister Justin Trudeau’s 50-50 gender split in his cabinet because he started from scratch while she inherited an existing cabinet, in which she was a member.

She also talked about the difficult balancing act of taking into account skill sets, geographic representation and gender politics as she makes up the new executive council.

Several ministers were seen parading in and out of the premier’s office late last week as Wynne sounded out veterans to see who planned to run again in 2018.

The premier’s office said it would not provide names or any other details of the cabinet shakeup until the swearing-in ceremony Monday.

Observers were watching to see if Glen Murray will remain in his role as environment minister now that the Liberals’ $8.3-billion climate change action plan has been announced, wondering if he’ll also get to administer its implementation.