‘I just think of the music’

By age 10, Mozart had finished his European grand tour. When Frédéric Chopin was 10, he composed a march for Grand Duke Constantine. Franz Liszt was in courtly Vienna, studying with Antonio Salieri.

By 10, pianist Kevin Chen had written three symphonies and nearly 80 other compositions for piano and violin, made his Calgary Philharmonic Orchestra debut in front of about 2,000 people and no longer needed a small platform to reach the floor pedals.

FROM THE ARCHIVES: In 1944’s “Wonder Children,” Maclean’s asks what happens to prodigies when they grow up

He looks down bashfully or at his teacher when asked questions, almost too shy to fidget, let alone give much more than one- or two-word answers. “I just think of the music,” he explains, when quizzed on his antidote to nerves when playing for large crowds. But there’s another language he’s more loquacious in. When Kevin opens the music book or reaches into his extensive repertoire of memorized works, he launches into a rich and exacting musical monologue.

Kevin became the youngest person in Canada to earn an associate’s diploma at the Royal Conservatory of Music, at age eight. He’s won awards at student composition competitions open to musicians of all ages. In 2013, CBC Music named him among Canada’s top 30 classical musicians under 30. He recently recorded a debut CD, featuring classical works plus his own compositions—and he’ll audition to play with other Canadian orchestras. Undoubtedly, he’ll grow bigger and stronger—and more capable on the instrument he has already mastered.

Kevin’s parents weren’t musical, but they gave their eldest son a toy keyboard as a toddler. His remarkable ear became apparent at age 2½, when he began precisely tapping out Twinkle Twinkle Little Star and Old McDonald Had a Farm on his own. When he did this one day at an Edmonton piano store, the store owner pulled Kevin’s father, Matt Chen, aside. “He needs to start learning piano right away, and by age five or six he’ll play piano better than university students,” the engineer recalls being told. 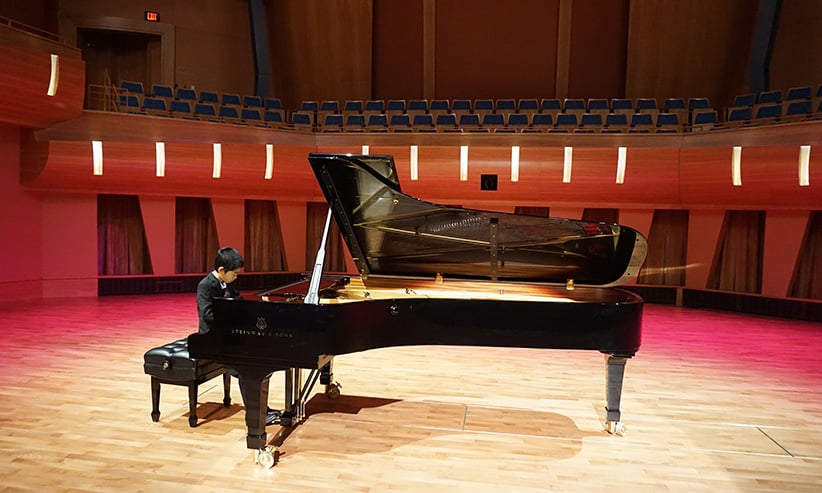 By age 10, Chen had written three symphonies and nearly 80 other compositions for piano and violin. (Matthew Chen)

Wanting his child to have time to be a child, Matt kept him out of formal lessons until age five. Within months, the boy had outgrown his first teacher. Kevin then went to Colleen Athparia, a well-known pianist and instructor at the University of Calgary, who doesn’t normally take such young students; she made an exception for this stunning young talent.

She remembers the way he used to press his nose down close to the piano keys as he tried to stretch both hands across to the far keys. He’s since honed his technique, gained confidence, and writes music with an emotional maturity far beyond his years, Colleen says.

“He soaks it up like a sponge. He seems to understand the language of music so well,” she says. “I don’t feel like I need to teach him. I guide him.”

Colleen says he’s more than a prodigy—“really a true artist in the making.” Then she catches herself and clarifies: Kevin is already a true artist. — Jason Markusoff