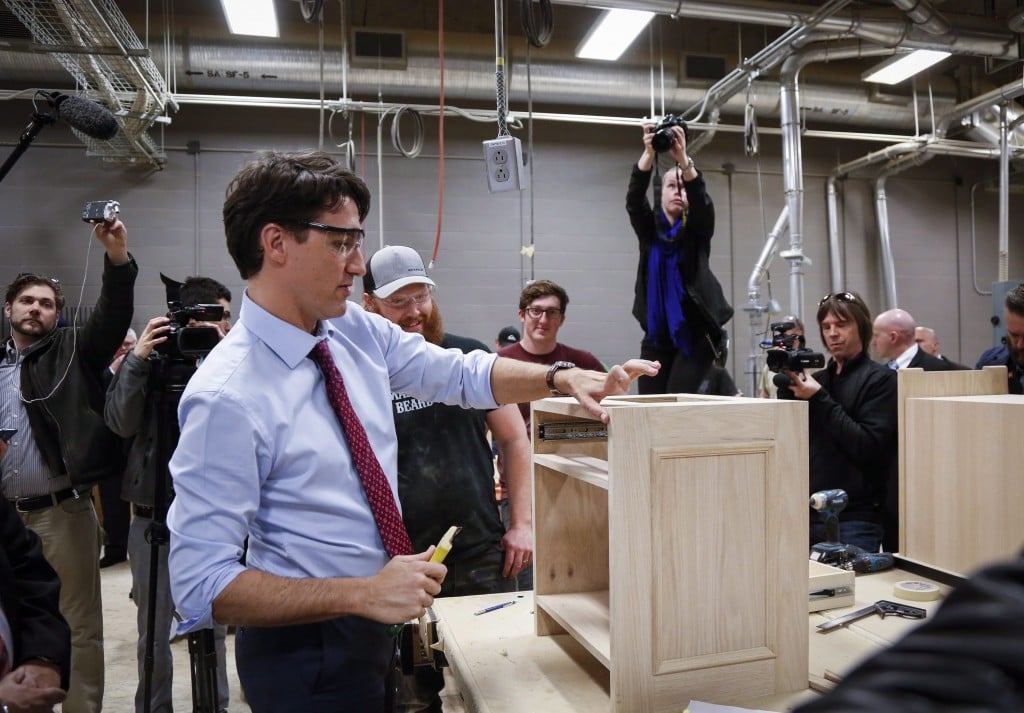 The promise, announced in September by Trudeau himself, was supposed to come into force this year and extend through 2017 and 2018 _ but it didn’t receive a mention in the budget.

During the campaign, Trudeau noted that the Chretien Liberals did something similar in the late 1990s “to tremendously positive effect.”

“We saw the number of young people’s jobs spike during those years,” Trudeau said during a campaign stop in Burnaby, B.C.

“That’s exactly what we need right now, given the extremely high unemployment rates for youth.”

Last month, the country’s unemployment rate for youth aged 15 to 24 was 13.3 per cent, compared to an overall jobless rate of 7.3 per cent.

Trudeau`s promise would have also provided financial relief for potential bosses by waiving the EI contributions.

Dan Kelly, president and CEO of the Canadian Federation of Independent Business, said Tuesday his membership was very supportive of the promise of EI relief.

“That was one thing that business owners really liked,” said Kelly, who was also deeply disappointed the Liberals “deferred” another of their pledges to continue reducing the small business tax rate beyond 2016.

“That was the second element of their platform that we applauded and they scrapped that, too.”

Federation members liked the previous edition of the EI-holiday program in the 1990s, Kelly added.

Trudeau, who participated Tuesday in a roundtable on employment insurance in Calgary, had presented the commitment during the election campaign as a component of the party’s broader youth job strategy.

But last week, the Liberal budget earmarked $165.4 million in new funding for youth employment in 2016-2017. The budget said that investment was on top of $339 million already announced, over three years, for the federal summer jobs program.

The government pledged to provide more cash in the coming years for youth employment, with particular emphasis on boosting job opportunities for the most-vulnerable young people.

It also announced it will further explore, and eventually enhance, its youth employment strategy by seeking input from a panel of experts and a council of Canadians aged 16 to 24.

Later Tuesday, Finance Minister Bill Morneau pointed to some of these items from his budget when he was asked about the absence of the EI-related youth employment policy. He also noted that the budget contained significant changes that will increase student grants.

“We look at those measures as being important,” Morneau told reporters in St-Valentin, Que.

He was also asked if the decision to omit the EI-related measure was a permanent move.

“We’ll be announcing more once we come back with that strategy.”