Keystone, Mexico's energy moves, on the agenda for continental talks 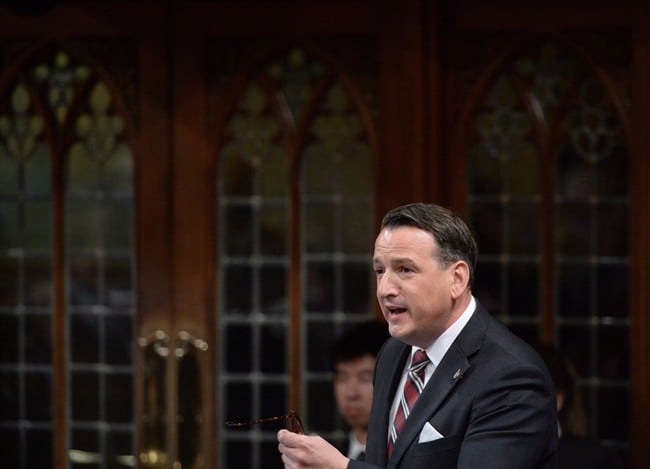 Minister of Natural Resourcea Greg Rickford responds to a question during question period in the House of Commons on Parliament Hill in Ottawa, on Nov. 19, 2014. (Sean Kilpatrick/The Canadian Press)

OTTAWA – The falling price of oil and what to do about it, the Keystone XL pipeline, and Mexico’s major oil and gas shake-up will be on the table as North American energy ministers meet Monday.

Natural Resources Minister Greg Rickford is set to meet with his counterparts Ernest Moniz and Pedro Joaquin Coldwell from the U.S. and Mexico respectively in Washington, D.C.

The rapidly falling price of gas, exacerbated by the Organization of Petroleum Exporting Countries’ (OPEC) decision last month not to cut Middle-Eastern oil production, will overshadow the talks.

Already, there has been buzz around the idea of a North American-style energy cartel to counter OPEC— although that has not be explicitly raised by any of the players who refer instead to a “strategic dialogue on energy co-operation.”

“This is a massive, fully integrated market in most respects, certainly with gas and electricity,” Rickford told CTV’s Question Period Sunday.

“Secretary Moniz and I have some key things to build on and enjoin our Mexican counterparts for that North American energy market integration that I think we all seek to strive for as matter of security and for the economic benefits.”

One of Rickford’s stated priorities is to emphasize that Keystone should go ahead, based on a U.S. State Department decision assessment from early this year. The pipeline has been tied up in the Nebraska Supreme Court, which is set to rule any day now on whether the legislature has the right to approve the pipeline’s route.

Meanwhile, President Barack Obama has expressed reticence about the project, arguing it would mainly benefit Canada and could have negative effects for climate change.

But there is another wrinkle to the pipeline issue that Rickford will also be addressing during the talks.

The Mexican government is loosening its monopoly over the energy sector, and opening it to exploration and development by private industry. It kicked-off bidding on exploration in 14 locations on the Gulf of Mexico last week.

Some analysts, including the North-South Institute, have said the changes will bring both opportunity and possible challenges to the Canadian government.

On the positive side, a more open Mexican market will mean a demand for Canadian energy expertise in that country. Toronto-based Pacific Rubiales recently signed a memorandum of understanding with Mexico’s PEMEX to look at exploration possibilities, particularly offshore.

But on the flip side, more oil and gas development by the most southerly NAFTA partner could mean more competition for the key American market — possibly making projects like Keystone even less attractive.

“Renewed interest in energy from its southern neighbour could thus shift the US’s focus away from considering the shipping of Canadian heavy crude through the Keystone XL proposed pipeline,” the North-South Institute wrote in a January policy brief.