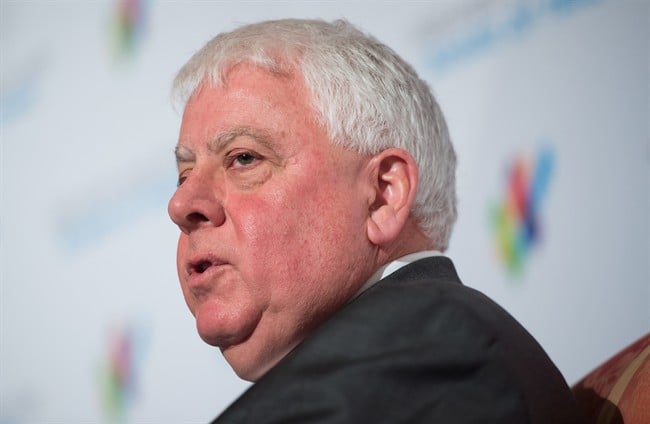 Kinder Morgan Canada President Ian Anderson participates in a question and answer session after addressing the Greater Vancouver Board of Trade in Vancouver, B.C., on Thursday November 3, 2016. (Darryl Dyck/CP)

VANCOUVER – The president of the company that hopes to build the $6.8-billion Trans Mountain pipeline expansion says he doesn’t know whether humans are contributing to climate change.

Kinder Morgan Canada president Ian Anderson told the Vancouver Board of Trade on Thursday that there is disagreement about the degree to which people influence global warming.

“I’ve read the science on both sides and I don’t pretend to be smart enough to know which is right,” he said.

“What I do know is the broad public, political view, societal view, is that over time, we as a race should reduce our reliance on fossil fuels. I think that’s a given.”

MORE: David Miller on why conservation needs to be king

He made the remark during an on-stage interview after delivering a keynote speech titled, “Pipeline Success: Getting to Yes Takes a Willingness to Listen and Learn.”

Anderson reiterated his comments later to reporters, but said he accepts public opinion that over time the impact of fossil fuels should be minimized.

“What I’m saying is: I don’t know enough to make that personal evaluation. I know there are arguments on both sides,” he said. “I just know what public and private opinion are and I’m prepared to accept that.”

There is broad scientific consensus about the cause of climate change. The Intergovernmental Panel on Climate Change, a United Nations body that assesses the work of hundreds of scientists from across the globe, has concluded that human influence on the climate is clear.

Andrew Weaver, a climate scientist who was a lead author in several of the panel’s scientific assessments, said the problem with Anderson’s statement is that there isn’t science on both sides. There is ideology on one side and science on the other, he said.

“The science is clear. It’s been clear for decades,” said Weaver, who is also Leader of British Columbia’s Green Party and a member of the legislative assembly. “The fact that (Anderson) could say he’s read the science on both sides suggests to me he doesn’t understand what science is.”

The Canadian Association of Petroleum Producers “absolutely” believes humans are contributing to climate change, said Alex Ferguson, vice-president of policy and performance, in an interview.

But he said the issue of whether climate change is man-made or not is irrelevant to the amount of effort its members are putting into curbing it. Companies have spent billions on advancing technology to minimize emissions from Alberta’s oilsands, he said.

“We know the effects of climate change are severe for people and the economy and the environment,” he said. “Whoever caused it, you would still want to fix it.”

Simon Donner, a climatology professor at the University of British Columbia, said not everyone has to be an expert on climate change. But Anderson’s remark was “disturbing” because it suggests he is not reading or watching information from actual experts.

“To be an influential person running an organization that’s a part of the big energy decisions in this country that are going to affect our ability to meet our climate targets — to be ignorant on the issue is to me, embarrassing.”

Also on Thursday, the federal government released a report by a ministerial panel tasked with doing additional consultation on the project. Prime Minister Justin Trudeau’s cabinet is expected to make a decision on the project before Dec. 19.

The expansion would triple the bitumen-carrying capacity of the pipeline that runs from near Edmonton to Burnaby, B.C., and increase the number of tankers leaving Vancouver waters seven-fold.

Though the title of his speech was “Getting to Yes,” Anderson noted at the outset that he didn’t want to be presumptuous as the company was nowhere near a “yes” yet.

He said if the project is approved, the company will need three years to finish regulatory work, and the pipeline wouldn’t be finished until at least 2019.