Why 'kindness meters' are a horrible way to deal with panhandlers

An new approach to dealing with panhandlers is catching on. But they fail to live up to the 'kindness' in the name. 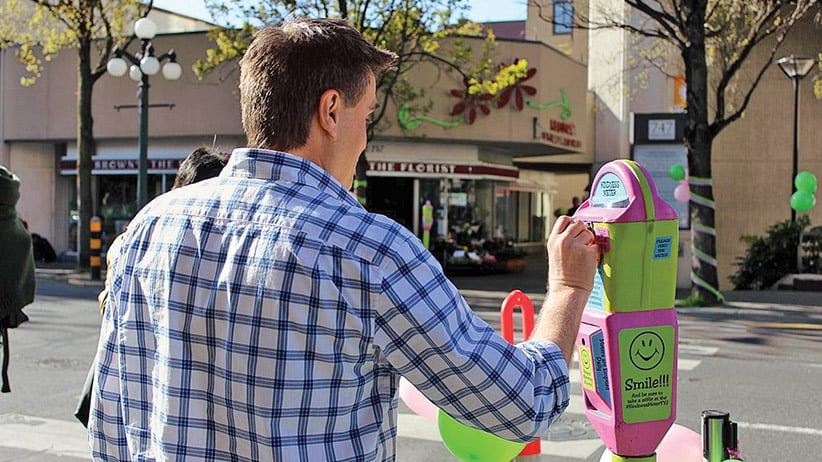 A kindness meter on the street in Victoria, BC. (Melanie Z. Kilpatrick)

Last month the town of Dawson Creek, B.C., became the latest community in Canada to experiment with what have come to be known as “kindness meters.” It’s a simple enough concept. Take discarded coin-only parking meters, repaint them in bright colours and install them in high-traffic areas popular with both shoppers and panhandlers. Passersby who want to help the less fortunate, but might not feel comfortable directly handing them spare change, can pop the money in the meter to be distributed to charities, who in turn help those panhandlers get off the streets—a win-win situation, as the concept’s proponents argue.

The idea is gaining traction. Over the last year the meters have sprung up in communities from Castlegar, B.C., to Truro, N.S., and are being considered in several others.

But as more towns and cities adopt kindness meters, often heralded as a practical way to help the homeless, the motivation can be less than altruistic. There’s evidence from places that have tried them that they simply don’t live up to the billing—either as a way to raise money for the poor, or of clearing panhandlers from sidewalks.

“We want to get rid of the panhandlers, simple,” Bruce McCormack of Downtown Fredericton Inc. told CBC last year after introducing six kindness meters downtown. “But we also want to be compassionate to them to make sure they have the available services they require.” That’s a common theme. With far less compassion, former Ottawa mayor Larry O’Brien once compared the city’s homeless to pigeons: don’t feed them and they’ll go away. Months later, he was promoting kindness meters. A pamphlet for Ottawa’s “Have a Heart—Give Smart” campaign, which installed 16 meters in the downtown core, states, “Giving money directly to panhandlers often supports drug and alcohol addiction.”

“It’s a really condescending message that infantilizes people who are homeless—that they are so incompetent and untrustworthy they can’t be trusted with change,” says Stephen Gaetz, a York University professor and director of the Canadian Observatory on Homelessness. “That can feed into the popular myths about homeless people that they’re all drug addicts, dangerous or lazy.”

There’s certainly a belief among many downtown business owners and local politicians across Canada that panhandling is a problem. “I thought, rather than be a business owner that moans and groans about the homeless situation and the impact it has on our city’s core, let’s try to engage the business community in an initiative that will be proactive,” says Teri Hustins, a store owner in Victoria and co-chair of the Fort Street Business Association, which installed two meters last April. They raised $3,300 in the first nine months—plus $500 from both the Vancity credit union and the Canadian Western Bank.

Hustins explains Victoria’s kindness meters aren’t designed to keep panhandlers away from downtown shops. Instead, she says, “it was about acknowledging this is an issue in our downtown and not everybody is comfortable giving to somebody asking for money.” Meanwhile, others see the meters as a stepping stone to encourage more giving. “If we can engage that person who would normally ignore the issue [of homelessness] to drop a loonie into a meter, then that’s a start in terms of getting them engaged in the issues of homelessness,” says Warren Maddox, executive director of Fredericton Homeless Shelters. “From that step, maybe next year we’ll get a $20 bill from them. And the following year $50.” With two Fredericton homeless shelters to keep open seven days a week, Maddox predicts his organization will get $3,000 from the city’s meters. That’s well shy of its $500,000 budget, but he welcomes every penny.

But will locals be dropping in loonies when the novelty wears off? When Peterborough, Ont.’s downtown BIA launched a similar project—they called them “care meters”—in September 2011, three meters generated $365.55 the first month. When they checked the meters again in December, there was $166.65 inside. By the summer of 2012, the BIA would wait four or five months between collections and still never cleared $300 per trip. Someone had to take the time to collect from the meters, count the spare change and record it, and then transfer the funds to the social service agencies—all of which cost money.

“The whole ‘care meters’ thing makes people feel good, but I don’t think it leads to meaningful change in someone’s life,” says Terry Guiel, executive director for Peterborough Downtown BIA. “It’s pennies for organizations that require millions.” Guiel admits he hasn’t checked the meters since late 2014. “I don’t need to waste my time anymore with it,” he says. “It’s just a dismal failure.”

As for decreasing the panhandling population, it had “zero impact,” Guiel adds. “We’d see the ultimate insult to their effectiveness by having panhandlers sit right beside them.”