Scott Gilmore on a sad cycle of violence in remote communities 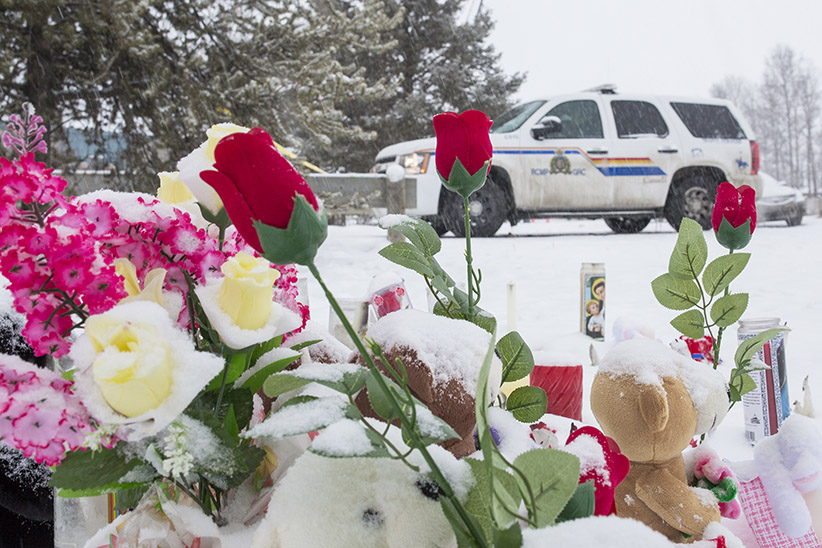 Flowers are left as the RCMP work on scene on the grounds of La Loche Community School in La Loche, Saskatchewan. (Photo by Chris Bolin)

This week, Gerald Moise piled up a stack of firewood in the La Loche cemetery. He poured gasoline on it, set the bonfire alight, and kept it burning for three days to thaw the frozen ground enough so he could dig a grave for his son, Dayne Fontaine.

Dayne was killed last week, along with his brother, a teacher and a school aide by a 17-year-old boy with a gun. Some people described the suspect as a black sheep. Trying to explain the shooting, one of his friends suggested he had been bullied for a long time and promised one day he would hurt his tormentor. But the causes of this tragedy go deeper than playground taunts, or a bad childhood or even his parents’ bad childhood. In fact, in La Loche and in similar Aboriginal towns across the north, the cycle of violence goes so far back it is impossible to find a first cause.

The small remote community sits next to the Methye Portage, one of the most important links in the earliest European exploration of Canada. The journals of those paddlers, looking for new routes to the Pacific, record a state of constant fighting among the Aboriginal peoples. Disease and fur traders, plagues literal and figurative, followed the explorers close behind. After this came the missionaries, the reserves and the residential schools. As Canada kept moving forward, becoming one of the most prosperous nations in the world, the people of the north stayed isolated, economically and socially.

When you look closer at La Loche, with the highest suicide rate in the region, in a region with the highest crime rate in the country, the immediate explanations are insufficient. It is true: the available social services are insufficient. The schools are underfunded. The police could use more resources. The gang problem is intense. Unemployment is high and opportunities are few. But even this is not enough to explain the constant violence, or how it is possible that one of the victim’s brothers was himself killed last year in a drive-by shooting.

We can dig past the poor governance and inadequate services. We can go deeper, into the injustices of the Indian Act. Or even further down to the establishment of the reserves and the deprivations of the missionaries. And still, the roots don’t end there. You can keep going until eventually you have stop in exhaustion and admit the north itself is violent and has been forever.

Isolated regions always are. Australia’s Northern Territory has that country’s highest crime rate. The remote regions of Papua New Guinea are more violent still. Siberia is the most dangerous region in Russia. In Brazil, the state of Pará, straddling the undeveloped stretches of the Amazon River, has one of the highest murder rates in the country, rivalling the lawless favelas.

These regions all have different histories, cultures, police systems, governments, economies and social safety nets. The only thing they have in common is isolation. They are disconnected from the economy, from the government and from society. In each, efforts have been made to change this. New roads were built. Industries were propped up. More teachers were sent in. Doctors, too. It all failed. To everyone’s dismay, remote regions remained remote.

Why do we keep doing it? Why do we keep pretending that somehow we can make the reserve system, and communities like La Loche, work? That this time, with a little more money and a little more empathy, we can end the culture of isolation, despair and violence that has plagued Canada’s remote north since before there was a Canada? It could be political correctness: we are afraid of sparking more moral outrage from Aboriginal Canadians and their supporters. Or perhaps the idea of dismantling the 140-year-old Indian Act seems too daunting. Or it could be just a naive romanticism that believes Aboriginal people should never be separated from what Jacques Cartier described presciently as “the land that God gave Cain.”

The only way we can ever truly help the people of La Loche and hundreds of other remote communities like it, is to give those who want it a viable option to leave, to build lives in southern Canada, integrated into one of the world’s healthiest, safest, most rewarding societies. If we really want to end the violence and depravation that plagues Canada’s remote Aboriginal communities, we need to help them leave these communities, forever. And if we are still not ready to do that yet, then the least we can do to help is to send them a backhoe as they keep digging graves.