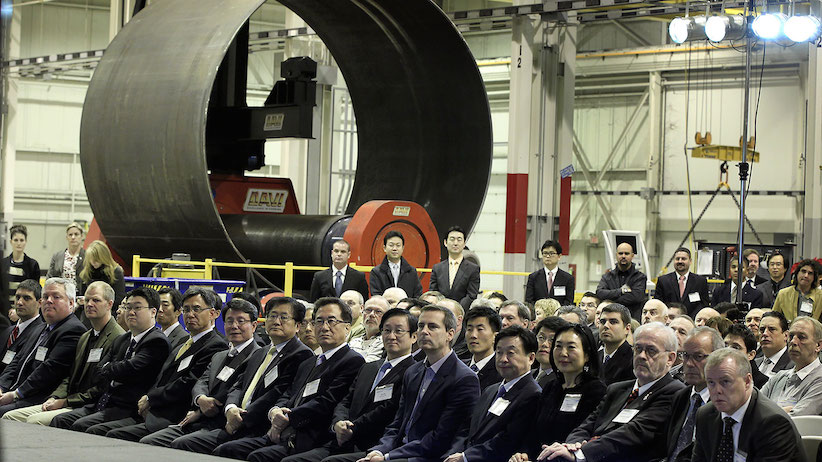 When it opened for business at the site of a shuttered assembly plant in Windsor, Ont., CS Wind was hailed as an early success story for the Ontario government’s flagship green energy program, which aimed to spark a renewable resource industry in the province and create jobs for thousands of unemployed manufacturing workers.

The Korean company, which manufactures the towers used in wind turbines, is a partner in a consortium led by Samsung that promised to open factories to employ Canadians building wind turbines and solar panels. In exchange, the province agreed to buy nearly $10 billion worth of renewable energy from producers at above market-rates (later reduced to $6 billion after complaints it would drive up energy bills). CS Wind said it planned to hire as many as 500 local workers, many of them out-of-work welders, and build towers out of steel from Sault Ste. Marie.

Yet years after then-premier Dalton McGuinty toured the plant for its December 2011 opening—sitting at the controls of a specialized hoist truck and declaring that his green energy strategy was “creating good jobs for our families”— the company’s use of two dozen temporary workers from Vietnam has become a key issue in an ongoing labour dispute at the factory.

An Ontario Labour Relations Board ruling released last month to determine which of CS Wind’s employees could form a prospective bargaining unit—as part of a union drive by the Iron Workers—noted the company had employed more than 30 workers from Vietnam in jobs that ranged from welding to assembly to quality control. Many worked more than 60 hours a week, compared to an average of 46 hours a week for Canadian counterparts. Three employees told the board they were being paid the equivalent of between $960- $1,600 a month in Vietnamese currency, while the company also gave them a retention bonus and covered their Canadian living expenses. The employees, who had come from the company’s Vietnamese factory, originally expected to stay between six months to a year to train Canadian workers. But the company extended their work permits because of “production and quality control issues” at the plant. Many have now been there more than two years.

CS Wind says it has had no choice but to bring over Vietnamese workers since it has struggled to find workers in Windsor experienced in the specific type of welding it needs. Its critics, however, have questioned why so many foreign workers are employed in a provincial program aimed at trading government- subsidized energy for Canadian jobs. “Back in the day we trained young Canadians,” says Lash Ray, business representative for the Iron Workers, who is involved in trying to organize the plant. “Today, unless you fit the exact criteria, they’ve got an easy way out to say, ‘We’ve got to get workers from halfway around the world that cost us less.’ ”

Canada’s Temporary Foreign Worker Program has been under fire amid allegations some restaurants have abused the system to hire low-wage foreign workers in place of Canadians. Last week, the federal government set a moratorium for restaurant employers. CS Wind’s Vietnamese workers came to Canada through an intra-company transfer, which allows companies to bring in workers with “specialized skills” without getting a labour- market opinion to show no Canadian workers can do the job. Employment Minister Jason Kenney has said that process is being investigated for abuse after complaints an Indian outsourcer contracted by the Royal Bank of Canada used it to replace Canadian IT employees.

CS Wind says its use of temporary workers from Vietnam has nothing to do with replacing Canadians with low-wage foreign labour, but is instead a reflection of the country’s skilled labour shortage and the challenges of trying to build a renewable energy manufacturing industry in Ontario from scratch. “This is a company that’s invested tens of millions of dollars in Canada and created employment for Canadians in an area that was frankly depressed with high unemployment,” says David McNevin, the company’s legal counsel. Today, the plant indeed employs 500 workers, just 25 of whom are from Vietnam. They’re mainly welders who have a decade of experience with a highly specialized type of welding not widely used in Ontario’s heavy manufacturing industry. Initially, says McNevin, the workers were paid roughly five times their Vietnamese salary, which ranged from $140-$421 a month, because they were expected to stay for only a few months. Back then the company had just one Canadian customer. But the green energy industry “has just exploded,” says McNevin, and the company has had to grow quickly to fill orders from across North America.

In January of last year, when it became clear the Vietnamese workers would be there a while, the company began paying them the same as its Canadian employees, between $17.50 and $23.50 an hour. Ultimately, McNevin says CS Wind hopes to transition to an entirely Canadian workforce, but the training process can take years. “This is not an employer attempting to avoid hiring local workers,” he says. “The bottom line is a lack of skilled workers in Canada and the need to improve apprenticeship programs.” Ray, of the Iron Workers, argues that two years is plenty of time to train a group of welders on how to learn a new type of welding. “We build cars, we build robots. We’re used to building stuff in this country, he says. “You can’t tell me that you can’t have your workforce trained in two years.”

Company vice-president S.H. Bang says he’s still desperately scouring the country in search of skilled welders. Whether they would be willing to accept the company’s wages is another matter. At $17.50-$23.50 an hour, roughly $33,000-$41,000 a year, the wages are less than half of what experienced welders can make in the Alberta oil sands, for instance.  Bang says the company’s wages are competitive in the sector, which faces intense international competition. Alberta oil workers may be rolling in cash, but Ray says the legions of unemployed welders in the Windsor region would be happy to work for $17 an hour. That’s the other issue with the foreign worker program: it risks driving down wages, even in industries looking for workers, like Ontario’s taxpayer-supported green energy industry.

“It’s not about finding skilled people or people who are interested in these jobs. It’s: ‘This is the wage we’re going to pay and we’re going to scan the globe to find people who are will- ing to work for that wage,’ ” says Angelo Dicaro, a researcher at private sector union Unifor. “It’s globalization run amok.”