The play also looks at the Athabasca River, where the water flows north in Alberta and is used in oil production. 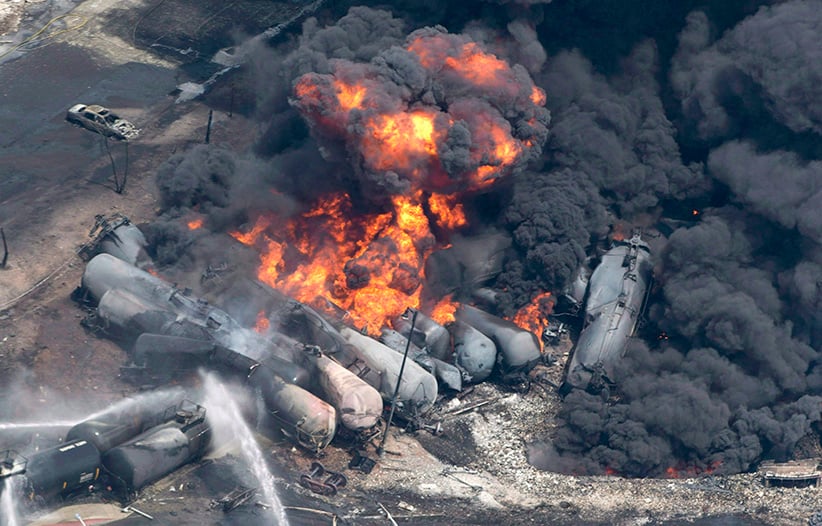 TORONTO – New Brunswick playwright Len Falkenstein has never been to Lac-Megantic, Que., yet he feels an attachment to it after the deadly train derailment that killed 47 people in July 2013.

“Like I’m sure everyone was, I was profoundly moved by the sadness of that story and I also felt, in a weird way, personally implicated in it after I found out that the oil that devastated the town was bound for New Brunswick,” he said.

“I sort of felt, ‘I’m responsible for this and I need to write something about it.'”

The result is Falkenstein’s “Lac/Athabasca,” a play inspired by the disaster in which an unattended train loaded with oil rolled down a hill, derailed and exploded downtown.

Running at Theatre Passe Muraille Mainspace as part of the SummerWorks Performance Festival, the Theatre Free Radical show features a town that experiences a Lac-Megantic-style disaster but in northern New Brunswick.

Falkenstein said the play is, in a certain degree, a retelling of the tragedy but it’s more so about what led to it and the bigger picture. It’s a fictionalized account of things that’s intended to be a more provocative piece looking at a larger national debate.

“We chart the chain of circumstances and obviously on the train end of things, there were so many egregious violations of rules and cutting of corners that it should never have happened,” said the director of drama at the University of New Brunswick.

“The less-simple fixes — getting over our dependency on carbon — I guess the play gestures towards what our carbon economy is doing to our environment and our need to move on from that as well.”

The play also looks at the Athabasca River, which Falkenstein was inspired to write about after visiting the region a couple of years ago.

Standing on the Athabasca Glacier in Jasper National Park, he thought about how the water that would melt from the ice beneath his feet “would flow north and get used in the oil sands and oil production,” he said.

He also thought “about how the water that started there could end up turning into oil that could end up creating a disaster somewhere else.”

Falkenstein directs the cast of five actors, who each play multiple roles.

One of the actors is from Lac-Megantic and helped Falkenstein understand “how things are shaping up there and the state of mind that the town is in,” he said.

“The town’s website barely makes a mention of the disaster, for example, and yet I’ve heard that a lot of people have just left in despair, I guess. Both those states of mind are reflected in the play that we do.”

“Lac/Athabasca” has won several awards and will next play in Kingston, Ont., Fredericton and Saint John, N.B.