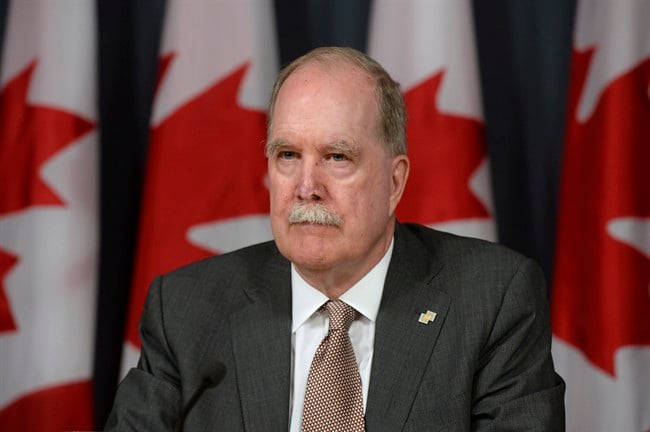 Official languages commissioner Graham Fraser speaks at a press conference as he releases a special report to Parliament entitled Air Canada: On the road to increased compliance through an effective enforcement regime, in Ottawa on Tuesday, June 7, 2016. THE CANADIAN PRESS/Adrian Wyld

OTTAWA – Air Canada consistently flouts the Official Languages Act and Parliament must do more to pressure the company to comply with the rules, Canada’s official languages commissioner said Tuesday.

As he tabled a special report on the airline in the Commons, Graham Fraser said his office doesn’t have enough power to force it to offer more French-language services.

“My predecessors and I have used all of the tools at our disposal in order to help Air Canada improve its compliance to the act,” he told reporters. “However, after 45 years, the same issues continue to repeat themselves.”

He said his office continues to receive complaints about unilingual anglophone employees on Air Canada flights between Montreal and northern Quebec and beefs regarding employees who refuse to get French-speaking agents to help francophone travellers.

Fraser said what turns an unhappy passenger into a complainant is the contempt the airline’s employees allegedly show toward people who ask for service in French.

“I think the first time I heard the phrase ‘Sorry, I don’t speak French’ was on an Air Canada flight,” he said. “It’s often a question of attitude.”

Fraser’s report is specifically about the airline, which under federal law is obligated to provide French-language services.

The report outlines four ways Parliament can help him pressure Air Canada, including giving him the power to levy fines for non-compliance.

Fraser said another option is to modify the law to allow a court to force the airline to pay damages and interest when it is found to have broken the rules.

He also said Parliament can penalize the airline with other financial sanctions or allow his office to enter into binding agreements with the company.

The commissioner asked MPs to study his report “with urgency and as a priority.”

Ottawa has not indicated it is ready to change any laws, but Heritage Minister Melanie Joly said Tuesday it is “unacceptable that Air Canada doesn’t respect its responsibilities with regard to the official languages.”

She said she would work with Transport Minister Marc Garneau to ensure things change.

Air Canada said Fraser’s report was unjustified as the number of complaints against the company has remained stable at around 50 a year.

“The commissioner’s contention that there is an exceptional, systemic problem of non-compliance by Air Canada … has been rejected by both the Federal Court of Appeal and the Supreme Court of Canada,” the airline said in a statement.

“Punitive measures aimed at Air Canada as suggested by this report are without credible justification, misdirected and would not contribute to promoting bilingualism in Canada or improving the level of services in both official languages available to Canadian travellers.”