"These cases are meant for real complainants and real grievances. There are none in this case.'' 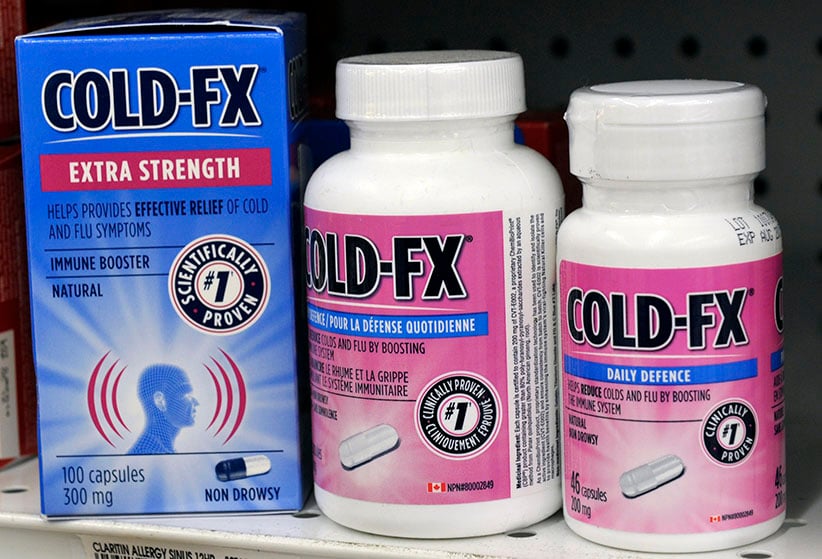 Products from Cold-FX, now owned by Valeant Pharmaceuticals, are shown on a drug store shelf in Toronto August 25, 2011. (Mike Cassese/Reuters)

VANCOUVER – The lawyer pushing for a class-action lawsuit over the alleged shortcomings of a popular cold and flu remedy is manufacturing a case with no real complainants, a court has heard.

The drug company is defending allegations it misled customers about the natural-health product’s short-term effectiveness in reducing cold and flu symptoms, which its advertising claimed in the past.

“Class actions are intended to be for real people with real complaints and they are not intended to be ? manufactured by entrepreneurial counsel,” said Valeant lawyer Alan D’Silva.

“These cases are meant for real complainants and real grievances. There are none in this case.”

Vancouver Island resident Don Harrison launched a claim in 2012 against Valeant and its subsidiary, Afexa Life Sciences, over advertising that said Cold-FX offered “immediate relief of cold and flu symptoms” if taken over a three-day period at the first sign of illness.

D’Silva told the court that at no point has Harrison sworn an official court document explaining the reason he purchased Cold-FX, whether he took it, if he felt he was misled or whether he ever complained and asked for a refund.

“He doesn’t even say he was unhappy,” said D’Silva.

“One of the fundamental problems is that … more than four years into this litigation, they still do not have a single person (who’s) come forward to swear an affidavit and say these things. Not a single person.”

Earlier this week, Green pointed to an internal Valeant study that he said surfaced during court proceedings and shows the drug is no more effective at reducing symptoms than a placebo.

D’Silva disputed both Green’s conclusion, as well as the allegation the drug maker in any way attempted to conceal the research.

“What Mr. Green has done, both in his argument and in his many comments and discussions with the media leading up to today’s hearing, is to very selectively cherry-pick a chart out of one of the studies, which does not accurately reflect what we’ve put in the record,” D’Silva said.

He pointed to that particular study’s conclusion, which said Cold-FX was in fact effective at treating a runny nose.

D’Silva also opposed the lawsuit receiving class-action approval because of the absence of an easily defined class of complainants, which is one of the criteria for certification.

Not everyone who purchased Cold-FX would be eligible, rather only those who bought the product with the intention to use it in the way that was allegedly falsely advertised, namely to treat immediate symptoms with a three-day dosage routine, he said.

If the case is granted class-action certification and goes on to win in court, Green says anyone who bought Cold-FX to treat immediate cold and flu symptoms could be eligible for a refund.