Lawyer sues the consulate next door 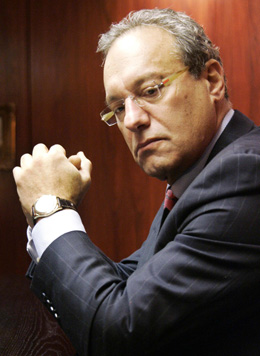 It’s not that Robert Teitelbaum doesn’t like his new neighbours. He’s just worried that they’ll cause his untimely death.

For nearly three years Teitelbaum, a divorce lawyer, has leased office space in Westmount Square, a posh residential, shopping and office development in the Montreal neighbourhood of the same name. Then, in 2006, the Israeli consulate moved in across the hall and, to hear Teitelbaum say it, all hell broke loose. According to his motion, the consulate brought in “35 tons of metal sheeting” and “30 tons of cement and bomb proof glass” to fortify itself. Teitelbaum says he has become a “human shield” destined to become collateral damage if someone attacks the consulate. “All it would take is for some nut who wants to see 72 virgins to set off something,” Teitelbaum says, referring to a potential suicide attack.

A staunch defender of Israel, Teitelbaum takes pains to make it clear he has nothing against the consulate itself. He just wants to feel safe in his own office. But the property managers, he says, have done nothing to increase security outside the consulate. The bathrooms are always unlocked, for one. And last week, several dozen pro-Palestinian protesters entered the building and held a noisy demonstration nine metres away from Teitelbaum’s door. “It proves my point,” he says. “Nothing stopped them from getting up here.”

Last summer Teitelbaum and Solomon Katz, a notary on the same floor, filed suit against the consulate and Cogir, the property management company, claiming the consulate prevents them from “peaceable enjoyment of the premises.” The pair also want an injunction compelling Cogir to beef up security on their floor and install a permanent guard. (Neither Cogir nor the Israeli consulate returned calls from Maclean’s.)

But the case was recently rejected by Quebec Superior Court, claiming that Canada’s State Immunity Act means that Israel can’t be prosecuted. Teitelbaum is appealing the decision. “I worry about getting my ass blown off every time I take a leak.”