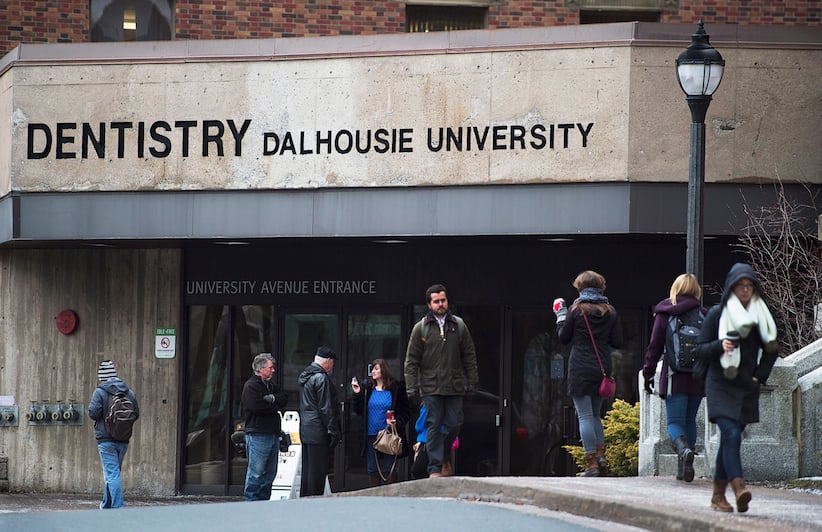 HALIFAX – A dentistry student who was part of a Facebook page that contained sexually violent content about female classmates was suspended largely because he clicked the “Like” button on one suggestive photograph, his lawyers said Wednesday.

Sarah MacIntosh said she was surprised to learn that her client, Ryan Millet, was penalized for that single action and his membership in a now notorious Facebook group linked to Dalhousie University’s fourth-year dentistry class.

MacIntosh told a news conference that Dalhousie University concluded Millet was guilty of “blatant unprofessionalism” and, as a result, suspended his clinic privileges earlier this month based on six specific posts made in the Facebook group.

Millet’s lawyers learned of the posts at a four-hour disciplinary hearing Tuesday evening, adding that the 29-year-old student had not seen two and was active on just one of them.

The photo in question is from a humour website and shows a woman sitting on the steps of a public building with a sign tucked under her folded legs that reads: Public entrance.

“Clicking the ‘Like’ button on that photo resulted in his indefinite suspension and has put his degree at Dalhousie and his career on the line,” she said.

“That finding was based on the limited fact that he was a member of a Facebook group in which other people posted inappropriate comments.

“If that’s the new standard — guilt by association is the new standard for a finding of unprofessionalism — I mean people should be looking at what movies they watched, what parties they might have been at where other people made other inappropriate comments last weekend.”

MacIntosh said Millet agrees that posts containing sexist, homophobic and misogynistic content were offensive and in one case breached patient confidentiality, as it showed a patient lying on a gurney partially covered by a towel. She said it wasn’t clear if it was a patient of Dalhousie University’s dental clinic.

Millet’s legal team, including Bruce MacIntosh, also took issue with the disciplinary process the university began after the Facebook page came to light in December and stunned the public with its content.

Bruce MacIntosh alleged that the university hasn’t shared information about the case against Millet, has held closed-door sessions to decide his fate and didn’t allow Tuesday’s in-camera hearing to be recorded. They say they asked for an adjournment after the committee rejected their request that Millet’s suspension be lifted and that his record expunged.

The lawyers said they want the school to start the process over with a retired judge or arbitrator to determine which of the 13 members of the Facebook group were guilty of professional misconduct.

A spokesman with the university did not respond to a request for an interview. Brian Leadbetter has said it is following a just process and will evaluate the cases of the 13 men who were part of the group.

“The process is irretrievably broken,” Bruce MacIntosh said, adding that they have advised Millet to participate in the disciplinary hearing only if the school’s senate appoints a new arbitrator.

“If it doesn’t, there’s a Supreme Court of Nova Scotia down the lane that I think would be very interested in looking at the way this has unfolded.”

The lawyers contend Millet was part of the group but helped expose it by revealing it to one of the women featured in a sexist post.

The group called Class of DDS 2015 Gentlemen has been taken down, but school officials and Millet’s lawyers have viewed about 50 pages from the site.

According to the CBC, members of the Facebook group voted on which woman they’d like to have “hate” sex with and joked about using chloroform on women. The CBC said in another post, a woman is shown in a bikini with a caption that says, “Bang until stress is relieved or unconscious (girl).”

Sarah MacIntosh said the hate sex poll was not mentioned by the committee members at the disciplinary hearing and was not included in the six posts cited in Millet’s case.