'He basically treated every case as the same, something that requires his full attention and work' 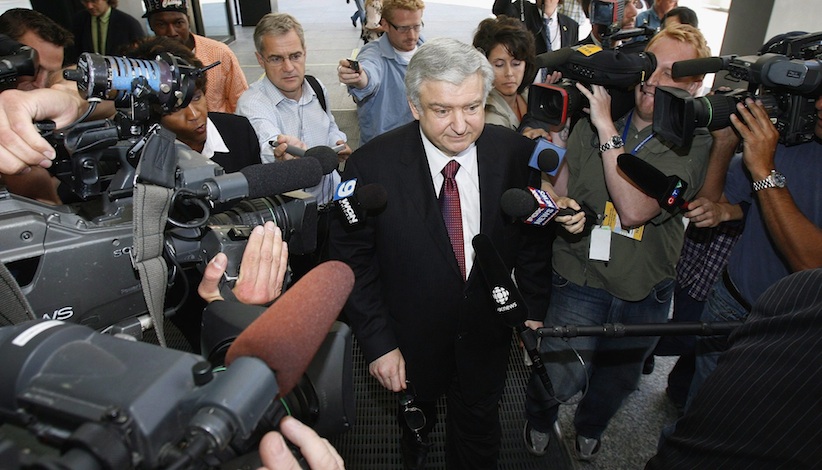 TORONTO — Edward Greenspan, one of Canada’s most formidable criminal lawyers, was remembered as a force to be reckoned with by many in the legal community who mourned his death on Wednesday.

“It is with great sadness that we announce the passing of our senior partner, friend and father Eddie Greenspan,” the firm said on Twitter, adding that a funeral was planned for Dec. 28.

News of his death drew swift reaction from a number of individuals in the legal community, with many calling Greenspan one of the legal profession’s best.

“In any courtroom that Eddie Greenspan stood, no matter who else was there … Eddie Greenspan was the biggest personality in that room,” said Toronto criminal lawyer Edward Prutschi, who worked with Greenspan on occasion.

“I was one of hundreds, maybe more, law students who grew up idolizing Eddie, reading his book, skipping class at every opportunity to watch him cross-examine and just always hoping to be a fraction as good as he was.”

Prutschi asked Greenspan once if he ever planned to retire and recalled the veteran lawyer’s answer.

“He responded to me completely deadpan, competently serious, that his hope was to die in a courtroom immediately after hearing a jury return with the words ‘not guilty,”’ Prutschi said. “That just expresses the all-consuming passion that he had for criminal law.”

Greenspan, who was once the vice-president of the Canadian Civil Liberties Association, was also known for his opposition to capital punishment.

He suspended his practice for a few months in the late 80s to campaign against a motion to reinstate the death penalty in Canada. He was also a part of a 2001 case involving two men in which the Supreme Court of Canada ruled the death penalty to be unconstitutional.

“I remember him for his campaign against capital punishment,” said Anthony Moustacalis, president of the Criminal Lawyers’ Association. “He was a singular and strong voice against that and shaped Canadian law as a result.”

Moustacalis, who last saw Greenspan at an event just a few weeks ago, called the gregarious lawyer “a lion at the bar” who worked tirelessly on all his cases.

“He basically treated every case as the same, something that requires his full attention and work,” Moustacalis recalled. “Even though he got a lot of publicity, there was a lot more good that he did that went unknown. He helped people on a pro bono basis and always had an ear for anyone who needed some help or advice.”

Greenspan also had a trademark style, noted veteran civil lawyer Alan Lenczner, who went up against Greenspan in a number of debates over the years.

“He has an unerring focus on the heart of the matter,” Lenczner said. “He’d exploit the weaknesses right away. He didn’t bother with niceties. It was like an arrow coming off a bow and straight to the bull’s-eye.”

Greenspan was nonetheless pleasant, and never rude, while he dismantled an opponent’s augments, Lenczner noted.

Meanwhile, outside the courtroom, Greenspan was a great conversationalist, Lenczner added.

“He’s happy to talk about anything and everything,” he recalled. “He was wry. He could see the funny side of virtually any topic.”

It was clear, however, that Greenspan took his work very seriously.

In one of his last public appearances in late November, he discussed a murder case he had lost 30 years ago but which still haunted him.

The “perplexing” case, which was the subject of a chapter of a book to which he had contributed, involved “Tom James,” whom a jury convicted, a frail Greenspan told a reading in Toronto.

Even the prosecution believed Greenspan had shown at trial that the man had acted in self-defence, the lawyer said, but the jury didn’t believe it.

“Even a seemingly perfect trial can lead to the conviction of a perfectly innocent man,” he told the audience of mostly lawyers.

“Mr. Greenspan was a brilliant lawyer, a man of great intellect and principled action,” he said on Twitter.

Greenspan grew up in Niagara Falls, Ont., and decided to be a lawyer at the age of 13 following the death of his father, who had completed one year of law school before being forced to move back home to support the family business.

“My dad wanted to be a criminal lawyer,” he told the St. Catherines Standard in a 2013 interview. “I wanted to live out his dream because he never got to and I felt somewhat responsible.”

Greenspan earned a Bachelor of Arts from the University of Toronto in 1965 and graduated from law school in 1968. He was called to the Bar in Ontario in 1970.

He received a number of honours over the course of his career, including the Law Society Medal, the top honour awarded by the Law Society of Upper Canada, which was bestowed upon him in 2013.

Greenspan’s memorial will be held at the Benjamin’s Park Memorial Chapel in Toronto.